Every body wants them but if ripped 6-pack abs were easy to get, we’d all be walking around with washboard stomachs. So, below are some typical myths that are associated with having great abs:

Six Pack Abs Myth #1
I need to do 1,000 crunches a day: Totally false! The motion of the crunch (torso flexion) is a fine movement, but generally is over used. Instead of just doing crunches, use a variety of exercises that include static holds, rotations and torso extensions (cobras, bird dogs, stability ball back extensions).

Six Pack Abs Myth #2
I can work my abs everyday: Your abs work in a variety of ways: flexions, extension, rotation, actively and statically to support your spine. Your abdominals need to be trained in all of these ranges of motion. However, your abs are just like any other muscle fiber. They grow and get stronger during recovery (rest), so training them every day is counterproductive. If you do feel the need to train them more frequently than other body parts, I suggest you have a flexion/extension/rotation day (crunches) and then follow that up with a static isometric day (planks, abdominal draws). That way, even though the abdominals are not getting complete rest, the fibers are being trained in different ranges of motion.

Six Pack Abs Myth #3
I can isolate different parts of my abs: The abs work in perfect unison with the different muscle groups: rectus abdominus, the obliques, the transverse abdominus, and all of the tiny stabilizers that lie within the deep intrinsic core. You can’t isolate every single individual part of the abdomen, but there are specific exercises that engage some parts rather than others. As stated before, your abs must be trained with a variety of extension, flexion, rotation and static holds. 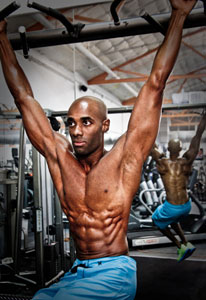 If I simply train my abs, I can get a six-pack: Unfortunately, it is not that easy! Working your abs can make them stronger, but the primary factor in revealing those cut abs is losing the layer of body fat that is sitting on top of them. Burning that unwanted fat mainly centers around your diet. Remember, great abs are made in the kitchen and not in the gym! A lot of people workout constantly and don’t see results and get extremely frustrated. Clean up your diet and you’ll get much better results faster!

Six Pack Abs Myth #5
Girls can’t have six packs: A lot of women have given up hope because they’ve heard this, but it just isn’t true! It can be harder for women to get defined abs than men because women naturally have different percentages and distribution of body fat, but that doesn’t make it impossible. Just be careful that you don’t lose too much body fat to the point of causing issues (menstruation irregularities which could cause loss of bone mass and lead to osteoporosis).

Six Pack Abs Myth #6
Everybody has well-built and muscular abs under the layer of fat on their belly: Even though everyone has abdominal muscles, it doesn’t mean they are strong and muscular. Just like any other muscle group, you need to develop them with the right exercises. Combine fat loss cardio with effective abdominal exercises for a great combination that will really give you killer abs!

Six Pack Abs Myth #7
Getting abs is the cornerstone of fitness: Getting great abs is surely a great feeling, but it isn’t the “be-all and end-all” to fitness. You can be fit without a six-pack too! But if you have one, it certainly is impressive.

Six Pack Abs Myth #8
If you want abs, you have to eat extremely healthy and never stray: I know I said you need to clean up your diet, but that doesn’t mean you can never have a treat ever again. Having something that is less than ideal for your physical health is oftentimes important to your mental health and it doesn’t mean you’re going to lose all of your progress and hard work (just don’t get too far off track for too long). Watch your sodium intake also because if you eat a lot of sodium it will cause you to retain more water which can make you look bloated.

Six Pack Abs Myth #9
You should only focus on exercises that target your abs: This can be more effective, but make sure that in your quest for abs that you don’t neglect working other parts of your body! There are also plenty of workouts you can do that target more than just your abdominals. This can be especially beneficial because you might not even realize you’re working your abs as a secondary muscle which can make it easier to do than just performing straight ab exercises.

Six Pack Abs Myth #10
You don’t need to take rest days: Rest days are important for your success! You build muscle during your recovery days, not when you exercise. When you exercise, you strain the muscles and tear tiny fibers. The rest days are when that muscle heals itself and builds back up. So don’t be afraid to take a day off from training every now and then! And of course make sure you’re getting the proper nutrition needed to fully recover (calories, carbs, protein, fat).

Great abs are a goal of a lot of people who workout but very few ever achieve that shredded and defined “6-pack” look. By training your abdominals with a variety of movements and exercises mentioned above along with consistent strength training, cardio workouts and clean nutrition, you will see those abs start to come through. Remember, hard work and discipline will help you get that six-pack you’ve always dreamed of!

James Romans is a certified sports nutritionist, performance enhancement specialist, and conditioning specialist. He has over ten years of experience in health and fitness, physical education, and coaching. James has a master’s degree in Exercise Science and a bachelor’s of science degree in Kinesiology. See my profile page for more information!