You are at:Home»Cardio»The Cardio Trap – Are You Doing Too Much Cardio Exercise?

Back in college I was a cardio junkie. Were talking a hardcore, life-sucks-if-I-don’t-workout kind of junkie. My public reason for doing cardio 2-3 hours a day, 6-7 days a week was because I was a bike racer. I had teammates who were counting on me to perform on the bike and I wanted to do everything I could to stay competitive. However, underneath there was the real reason why I was compelled to spend 2 hours a day like a hamster on a wheel. I call it the cardio trap.

You see, because of my high volume of exercise, I was also taking in a high volume of food. I was eating between 5-6 meals a day and these were not “frequent small meals” mind you. They were full-on meals that filled multiple plates. All of this eating made me very much afraid that I was going to gain weight if I didn’t work it off during a workout. The problem was that I was eating so much to fuel my workouts.

So I was eating so much because I was working out and I was working out a lot because of how much I was eating.  My body was starving for calories and my mind was feeling the constant need to “purge” the calories. It was a battle between my mind and body that constantly left me strapped for time, energy, money and motivation.

I felt like I was on a runaway train that was moving too fast to jump off. Actually it was worse than that because I wasn’t even aware that I was on a runaway train at all. I figured that my binge and purge exercise cycle was simply how things worked in the world of cardio. Even though it sucked, I figured the suffering was part of the whole deal.

It wasn’t until I graduated that I came to realize that no one needs to be stuck in the cardio trap. That no one needs to constantly do cardio to avoid weight gain. The first thing that set me free was realizing that body fat levels were changed or maintained through a balance in calories. Even though I studied nutrition in college it somehow never sank in. But when I realized I was eating a little less because I had cut back on my cardio, things started to click. 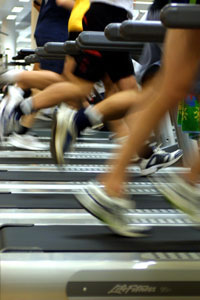 With a full-time job, I no longer had the time to spend 2-3 hours a day on an elliptical. When I cut back to an hour a day my appetite decreased and even though I was doing far less exercise, I was still maintaining my same body fat levels. I then realized that I never really lost any weight in college either. You would think that someone could lose at least a little weight by working out like it was their job. Then again, it would be reasonable to assume that someone who ate as much as I did would gain weight too.

The answer of course was that it wasn’t about how much I ate or how much I worked out. Instead it was all about the balance between the two. As long as the balance was maintained, my body fat levels would not change regardless of how much or little I worked out.

To test my theory, I spent the entire winter doing zero cardio. I went from doing 2-3 hours a day to maybe jogging up a flight or stairs a few times a day. I also scaled back my diet a bit. By the time the snow melted here in Vermont, I was still at exactly the same body composition. I think I may have even been a little leaner! Oh what a relief! To no longer feel the need to do loads of cardio! I was free of the cardio trap and could do cardio-based activities because I wanted to, not because I felt I had to.

Not only did I gain a lot more time from no longer needing to do so much cardio, but my health improved as well. My energy levels skyrocketed and my immune system became bullet proof. I was no longer draining my fuel tank on a daily basis, which meant I could put that effort and energy towards other, more important, things in life.

These days all of my cardio is done through doing activities I enjoy. I love hiking mountains, racing my bike and sparring. I’ve sold the spinner and haven’t touched an elliptical in years. My exercise time is based on improving physical skills and abilities rather that simply burning off calories.

If I feel like I may be in a positive calorie balance, I first turn to my diet. Rather than spending 2 hours huffing and puffing to burn off calories, I simply push the plate away a little sooner or have a few light dinners. It’s a heck of a lot more time efficient and I save money on food as well.

I wish I could go back in time and tell myself about the cardio trap. I would have saved myself so much time and effort. I think back to the hours I spent doing cardio while studying in Japan. I spent far too much time studying the console of a stepper instead of exploring the incredible country I was ignoring for over an hour every day. Above all, I would have saved myself so much stress and worry from the times when I couldn’t workout or if I ate too much at dinner. I wouldn’t have felt the need to work off the extra bowl of cereal or the moment of weakness where I had a slice of pizza.

At least I know about the cardio trap now, so I can reclaim my life and spend vacations on vacation instead of on the exercise bike. I can eat without the need to “pay for my sins”.  Above all, I learned to enjoy cardio again because it’s something I do because I want to do it, not because I feel like I have to do it.