You are at:Home»Diet and Nutrition»10 Reasons To Eat Organic – Health Benefits of Organic Foods

Why all of the hype surrounding organic produce? Is it really worth the extra expense or is it just another passing food fad? Why do we as trainers emphasize the importance of organic produce?

If you are wondering why you aren’t losing weight, the answers maybe below. An inside-out holistic approach to your health provides optimal long-term results. By investing a little extra and buying organic, you are investing in your health, the environment and supporting small farming communities.

#1. Avoid Hormones & Antibiotics in Dairy
Non-organic dairy cows are given growth hormones, fed pesticide ridden feed or grain and given antibiotics; all of which we in turn ingest. The non-organic cows that have had the antibiotic injections promote the adaptability of viruses to the increasingly stronger antibiotics, which in turn leads us to need stronger antibiotics ourselves to fight infections.

“With organic dairy farms, they must achieve certification that no hormones, antibiotics or non-organic foodstuffs are delivered to the dairy cows.”, said Jonathon D Septor. Not only is organic dairy better for us, you’re also supporting a system of agriculture that assures the health of both animals and land and is environmentally sound. Another option is organic raw dairy which eliminates the heating used on pasteurized or homogenized products which destroys the enzymes and breaks up the butterfat into suspended spheres of fat which can cause problems to the arteries.

#2. Avoid Hormones and Antibiotics That Are in Non-Organic Meat
Non-organic poultry are fed antibiotics which aid to create new strains of bacteria organisms, resistant to current antibiotics which is creating new problems instead of solving them. Cattle and sheep are fed in addition to antibiotics, hormones & tranquilizers (ever wondered why Sunday roasts make you feel lethargic?). The hormones (usually testosterone and estrogen) are to promote growth; no small wonder it’s hard for people eating non-organic produce to lose weight. There are 6 different steroid hormones approved by the FDA for use in food production; steroid hormones are the ones that are able to stay active in the body when eaten. Some of the concerns are whether it causes early puberty for girls, breast enlargement in both girls and boys and affect cancer risks (Cornell University). Hormone residues in food can increase the risk of breast cancer and other reproductive system cancers among women and may promote prostate cancer in men. So instead of eating to nourish your body, you are eating a product that is potentially giving you very little nourishment and actually deteriorating your health.

Organic meat is proven to have higher levels of vitamins and minerals without the risk of ingesting antibiotics & growth hormones. They also tend to have superior flavor and texture. 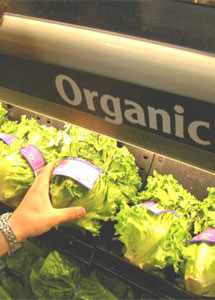 Many non-organic items of produce are irradiated which alters the genetic composition. By doing this the food becomes virtually nutrition less, as vitamins, good bacteria and enzymes are destroyed. Irradiated food also has chemical byproducts that are proven mutagens and carcinogens. Organic food isn’t irradiated and therefore maintains nutrients which we can ingest to fuel our bodies effectively, utilizing its nutrients to maintain energy levels and improve our overall well-being.

#4. Avoid Pesticides
Organic vegetables, fruits and grains should be a staple in your diet. Besides being sprayed with pesticides, some non-organic crops have even been engineered to produce toxins to ward off insects. Pesticides have caused bugs to build up a genetic resistance which has caused an increase in crop losses. Researchers don’t yet know the effects on humans of tampering with crop DNA.

While chemical abuse in the US appears to be declining as some of the more hazardous chemicals are no longer available to American Farmers, these rules don’t apply to trade and imported produce. Chemicals that have been banned in the US for years are still being used routinely elsewhere; around 20% of our fruit and vegetables are imported (Chrys Ostrander). The USDA estimates it only tests around 1-2% of these for pesticide residues, but these tests can only detect around 50% of pesticides used worldwide. Recent testing also still shows the highest level of the most toxic residues from chemicals, approved by the EVA and FDA, on domestic (US) produce. The chemicals were approved long before extensive testing linked them to cancer:

A new federal law will ensure every chemical in use and proposed for use will be tested to determine its effects on our health. Why wait for the testing to be conducted when you can start eating clean, nutrient rich, organic food right now.

#5. Avoid Toxins and Multiple Health Concerns
The toxins in non-organic foods affect us at a cellular level (our building blocks) and the side effects from eating non-organic produce include obesity, heart disease, cancer, and reproductive, behavioral and hormonal disease. In fact, most modern illnesses. Children are generally far more vulnerable to toxins than adults, so teaching them good eating habits while they are young helps to establish their eating habits and to make informed decisions as they grow. It often takes many years from illnesses associated with toxins to become apparent, so your food choices as a parent have a huge impact on your child’s future health.

#6. Conserve Air and Water Quality
Organic food doesn’t pollute the environment by releasing toxins like regular farming does. They are also prohibited from being point sources of nitrate. The problem with non-organic farming using pesticides, herbicides, fertilizer and soluble solutions is it infiltrates our surface and groundwater. Dangerous concentrations are consumed in water supplies by millions of people. Testing of municipal water systems revealed that the principal sources of drinking water for around 50% of the population has been infected. The herbicides and pesticides also get into the air and can drift for miles, many of which bind to dust particles which we inhale. 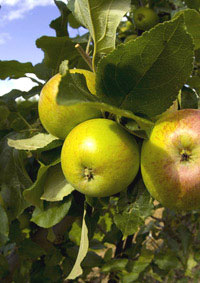 Organic farmers are legally bound to have a soil building program in place that prevents soil erosion and/or improves soil quality. They practice crop rotation; cover cropping and composting which protects the land. Buying organic supports this movement; as well as biodiversity. Another cost to us of buying conventional, non-organic products is that soil erosion costs us around $44 billion a year as they are prone to use mono-cropping which depletes the soil of its nutrients. Organic farming also uses less energy as there is less processing and transportation than in non-organic farming. Many organic farmers also use alternative and renewable energy sources in their farming.

#8. Decrease Cancer Risks
By eating Organic foods you are avoiding:

#9. Increase Your Energy
Eating organic foods will help prevent your body becoming overwhelmed with toxins which are stored in the adipose tissue (body fat). Those of you who have done a detox or elimination diet, will have recognized the benefits of eating organic and by continuing to do so, the results of your hard work can be maintained for longer. You also always know what you are eating when you buy “organic chicken breast” for example. It’s 100% chicken which is free of antibiotics, hormones and additives. Compare that to Taco Bell’s “Beef”. They currently have a lawsuit against them as their beef only contains 35% beef. So what’s the other 65%? Define ‘filler’? Is it fat, cartilage, scraps, cardboard, bone?

#10. Support Smaller Farming Communities and Fair Wages
Buying organic foods supports smaller farming communities, the environment, public health and animals. For example, many of the chicken farmers that work for the 4 main suppliers of non-organic chicken are in huge amounts of debt. They are constantly asked to make expensive upgrades to their chicken sheds that their income doesn’t meet (Food, Inc). These so-called “upgrades” are usually “downgrades” that deteriorate the life quality of the birds (e.g. taking out all sources of light).

So the excuse that organic produce is “too expensive” seems to carry little weight. What’s the price of saving on medical bills and maybe adding years to your health? Compare it to the expense of non-organic produce to your health and conscience. By eating organic, we are also supporting the environment by encouraging farming methods that produce less toxic byproducts, supporting small farming communities, looking after animal welfare and probably most importantly, being responsible for our own health by making the right choices that affect our health from a cellular level not just a superficial one.

I'm a qualified Certified Personal Trainer and Sports Massage Therapy. After graduating from Premier International I went on to work for Fitness First and Dax Moy, London and am on the Register of Exercise Professional (REPS). See my profile page for more information!