You are at:Home»Diet and Nutrition»Alkaline Ash Diet – How To Balance pH Levels with Healthy Food

After years of societal changes and technological advances, we as a race are now facing more dietary based health challenges than ever before. It is no coincidence that the rapidly growing numbers of cancer, cardiovascular disease and diabetes correlate almost exactly with the rise in consumption of acid forming foods such as sugars, saturated fats, and white breads.

At the same time our consumption of fresh vegetables and essential fatty acids has decreased dramatically, making way for convenience and a generation hooked on sugary treats.

Through what has become the typical Western diet largely based around meat, dairy, sugars, alcohol, saturated fats and caffeine, millions of us have created a hostile, acidic environment within our bodies.

The Issue of pH
Obviously, the pH level of our internal fluids affects every living cell in our bodies. The effect that over-acidification can have upon overall health is immense. A chronically over acidic pH creates an extremely negative environment that then affects all cellular functions from the beatings of the heart to the neural workings of the brain.

When our pH level is unbalanced, almost any area of our bodies can be negatively affected creating results such as cancer, heart disease, obesity, weight problems, allergies, fatigue and premature aging as well as problems with our nervous system, cardiovascular system and muscles.

The one hundred trillion cells in the human body are bathed in a nutrient filled fluid matrix called the Biological Matrix. This environment, like the soil, feeds and nourishes all of the cells in the body. The outermost wall of every cell is called the cell membrane. This membrane is permeable, which means that certain elements can flow in and out of this membrane. The cells absorb electrolytes, vitamins, minerals, enzymes and fluid in very specific amounts. The cell utilizes these nutrients to maintain cellular health and create substances called energy-rich intermediates. 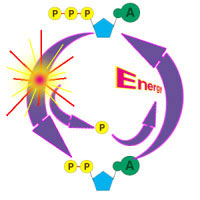 The body then uses these substances to produce energy in the form of ATP. ATP is the energy that fuels the various interactions in the human body. The waste products from these cellular interactions are then released back into the Biological Matrix for proper filtering and disposal by the body.

The Biological Matrix of the human body, just like the soil or Matrix that supports plant growth, requires very specific and balanced chemistries. Maintaining a balanced chemical environment includes the monitoring of the pH or acid-alkaline levels of the Matrix as well as assessment of the specific mineral, vitamin, electrolyte, enzyme and hormone levels. In addition, both the body and plants require plenty of biologically pure water, love and sunshine.

When a cell lives in an unhealthy Biological Matrix environment that lacks the proper pH it can become unhealthy and fail to thrive. Too few as well as too many nutrients and substances in the Matrix can interfere with the cell’s abilities to maintain the critical balance of elements that it needs to survive.

With prolonged exposure to these stressful conditions, the probability that the cell will lose its vitality and develop illness or disease increases significantly. With a lowered vitality and resistance, the cell also becomes more susceptible to the effects of microbes and organisms such as bacteria, viruses, parasites, yeast and fungus.

Balancing pH with Food
Your overall health depends on an alkaline environment, created by eating foods such as tomatoes, avocados and green vegetables, etc. Regulating your body’s acid/alkaline chemistry through simple changes in diet can result in weight loss, increased stamina and strength, a stronger immune system and a greater sense of well-being.

This is not as difficult or as technical as it sounds. When we talk about eating alkaline foods or starting an alkaline diet we are referring to consuming those foods and drink which have an alkaline effect on the body. This effect is based upon the mineral content of the food and therefore the ash residue that remains after our foods are consumed.

Of course, everybody is different – but most of us should aim to eat 70-80% alkaline foods and a maximum of 20-30% acid forming foods.

This does not have to be measured or counted. All you really have to do is take a look at your plate! Is 70% of the food on it alkalizing? As for the other 30%, you can do what you like. However, how far acid you want to go is up to you depending upon the results you want to achieve.

So, feel free to go for some oily fish, whole meal pasta or wild rice for example. But keep in mind that your health depends primarily on the pH balance of your blood. This balance, in large part, comes from the food you eat. 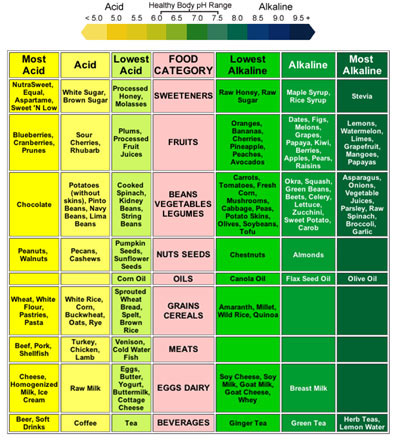 The first criterion of a balanced approach toward nurturing your Biological Matrix is to regularly consume water and natural juices to hydrate properly. Since all our cellular and bodily functions such as perspiration, respiration, digestion and elimination would collapse without water; a reduced water intake affects our cellular ability to function effectively. In addition, water is the most important instrument in losing weight.

The second criteria of the alkaline ash diet are the foods you consume. Observe which foods ignite your energy and which foods sap your strength or deliver a not quite fulfilling feeling? Do you feel a drop in energy 20 minutes after you eat a Big Mac or some deep fried chicken? This is where an alkaline ash diet will help turn things around.

Eating alkaline foods or starting an alkaline diet refer to consuming those foods and drink which have an alkaline effect on the body. This effect is based upon the ash residue that remains after our foods are consumed. Some foods leave an acid ash, whereas others leave an alkaline ash. Our bodies have been designed to categorize which foods deposit which kind of ash into the body.

The Alkaline diet (also known as the alkaline acid diet and the acid alkaline diet) is a controversial dietary protocol based on the consumption of mainly fresh fruit, vegetables, roots and tubers, nuts, and legumes while minimizing grains, dairy, meat and excess salt.

The Goal
The nature of body varies but most of us should aim to eat 75-80% alkaline foods and a maximum of 20-25% acid forming foods. The concept is to balance the acidity and alkalinity (the “pH balance”) of the Biological Matrix.

What Food is Allowed 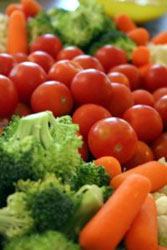 In order to alkalinize the diet it is important to start consuming alkaline foods and drinks while eliminating acidifying foods and drinks from your diet. As a rough guide you can simply remember that most fruits and vegetables have an alkaline ash.

There are a few exceptions to this generalization. Acid fruits include pomegranates, strawberries, cranberries, plums and prunes. Acidic vegetables include corn, asparagus and Brussels sprouts.

Other Alkaline Foods
Besides most fruits and vegetables, there are other foods that are widely accepted as being alkaline. These would include millet, buckwheat, sprouted beans, sprouted seeds, olive oil, soaked almonds, jam, chestnuts, fresh coconut, molasses, maple syrup, honey and millet.

What Food is Not Allowed
Foods to be avoided while attempting to alkalinize the body include sugar, dairy, meat (apart from fish occasionally), caffeine, alcohol, tobacco, wheat, yeast, fruit (apart from those mentioned above), bad fats (saturated, trans-fatty acids, hydrogenated) and salt.

The most effective way to reverse the trend of over-acidification is to ‘cleanse’ the body of toxins and rapidly create an alkaline environment in which the body can heal itself. Cleansing is a natural, holistic method of healing in which the body detoxifies itself and regenerates healthy vibrant cells, effectively becoming more alkalized.

Some practitioners recommend the alkaline diet if a person has the following symptoms and other illnesses have been ruled out.

Potential Risks of the Alkaline Diet
The alkaline diet should not be used by people with acute or chronic kidney failure unless under a doctor’s supervision. People with pre-existing heart disease and those on medications that affect potassium levels in the body should check with their doctor first.

The common belief among most medical practitioners, however, is that the blood alkalinity (pH) is not significantly affected by diet. However, there is evidence in conventional medicine that alkaline diets may help prevent the formation of calcium kidney stones, osteoporosis, and age-related muscle wasting.

Bottom Line
While there is no universal agreement concerning an alkaline/ash diet, the consensus seems to suggest that an 80/20 alkaline ash diet provides the most benefit for most people, most of the time.