You are at:Home»Diet and Nutrition»Amino Acids Explained – The Building Blocks of Protein and Life

There is so much to learn and understand about amino acids that it may lead you to some confusion. This confusion might leave you feeling overwhelmed to the whole idea of amino acids but that would not be the best idea since they are so important to maintaining health. So for the sake of your health, muscle development, repairing of muscle fibers and added fitness, I will do my best to lay down the information in a way that will end the confusion and help you make better choices when it comes to amino acid supplementation.

What Exactly Are Amino Acids?
Amino acids are the body’s building blocks and they are the driving force that produces the exact protein your body needs. Amino acids play a role in energy, weight loss, building muscle tissue, mood and overall brain function. There are essential and non-essential amino acids along with one that isn’t really spoken of often, which is conditional amino acids.

Essential amino acids cannot be made by the body. The only way to get these amino acids is either supplementation or through dietary means (eating different foods). Essential amino acids help repair organs, muscles, glands, ligaments, tendons, nails, skin, and hair. They also aid in the formation of antibodies which combat bacteria and viruses, carry oxygen through the body, and play a role in muscle activity. The nine essential amino acids are:

Three of these amino acids (valine, leucine, and isoleucine) are grouped together and make up BCAAs, or branch chain amino acids. Branched chain amino acids are given this name because their chemical structure is unique in comparison to the other amino acids. Through more recent studies, BCAAs have been shown to have anti-catabolic (the prevention of muscle breakdown) and muscle building properties. BCAAs also improve both protein synthesis, nitrogen retention, aid in rapid muscle recovery, reduces muscle fatigue, boosts muscle growth and helps in the preservation of lean muscle tissue. 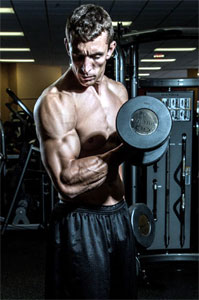 Conditional amino acids are usually not essential. However, during times of stress or illness, the need for them becomes dire. These include arginine, cysteine, glutamine, tyrosine, glycine, ornithine, proline, and serine. Trouble digesting food may be a sign of an amino acid deficiency. This inability to absorb nutrients can lead to poor health. If your diet is low in protein this can be the reason for this deficiency. For this reason, a diet high in good quality protein and sufficient amino acids, especially during times of trauma, stress, or illness is imperative.

What’s The “L” For?
You should always supplement with amino acids that have the letter “L” before its name, for instance, L-glutamine, L-arginine and so on. The “L” stands for Laevorotatory. But to simplify, amino acids that have the letter “L” in front of its name are more similar to the aminos that are in our bodies. The opposing “D” is not as similar. The only exception is D-phenylalanine, which treats chronic pain.

There are over 300 known amino acids. Of these 300, there is a short list of amino acids useful to the human body. The majority of the 300 amino acids are rare, not found on earth, or created in labs. It is not necessary to research all of the aminos in existence. Stick to the essential, nonessential, and conditional.

As a final note, I have listed a list of precautions that should be considered when supplementing with amino acids. Do not take arginine if you have genital herpes, or if you are prone to cold sores. Arginine has been known to trigger outbreaks. Do not take more than the recommended dose. Certain amino acids can be toxic when taken in excess. Some symptoms of overdose include nausea, diarrhea, and vomiting. Do not take lysine and milk at the same time. If you take an individual amino acid for longer than a month, you should change from the individual amino to a complex of various aminos. This ensures that you get a well-balanced amount of the various amino acids versus an overabundance of a particular one.

Due to the competing nature between protein and amino acids, it is best if you take them at least 30 minutes apart. Taking them at the same time will render one less effective. For better health and fitness, allow enough time in between your protein and amino acid intake. Remember, before you start any supplementation program you should discuss your intended plan with your doctor, especially if you suffer from any chronic conditions.