You are at:Home»Diet and Nutrition»Cayenne Pepper and Weight Loss – Spice It Up To Lose Weight

Keeping in mind the nature of the lifestyles that many of us lead, it comes as no surprise that ailments related to the digestive and respiratory system are a common occurrence. It may not always be advisable to pop pills often to cure oneself of these problems. People often invest more faith in using herbs and spices as home remedies to cure ailments on a regular basis. A reason for doing so could be primarily because spices and herbs are easily available and are much less expensive as compared to other drugs purchased over the counter. Also, many times people are more comfortable using natural remedies, opposed to medicated pills.

One spice, which is popularly used to treat a number of ailments, is cayenne pepper. The powdered form of which is derived from hot red chilies, very often used to flavor delicacies. Capsicum annuum, its botanical name, is a plant native to Central America and is popularly used in Southwestern and Latin American cuisines. This plant is cultivated in all temperate zones and widely used in the making of a range of traditional herbal medicines.

Cayenne Pepper and Its Many Uses
Cayenne pepper is the prime ingredient in particularly spicy delicacies. Consuming cayenne pepper in this manner not only helps increase the flow of blood throughout the body, but it also helps provide relief to sore muscles. This is the reason why it is advised that people who suffer from arthritis and pain in joints and muscles should increase their intake of cayenne pepper. A study conducted by the University of North Carolina established the positive impact of cayenne pepper on maintaining steady blood pressure levels too.

Cayenne pepper can be easily consumed, mainly because it can be effortlessly included in a diet plan. Seasoning of food with this pepper not only helps strengthen the digestive system, but it also helps resolve the problem of bloating and other gastric issues. By controlling both internal and external bleeding, it helps treat stomach ulcers to a great extent.

The spicy flavor that it imparts to the food ensures that one eats relatively less, which also make losing weight much easier. Not just this, but it also improves the rate of metabolism of the body and helps burn more calories, therefore being of much help to people who want to shed extra fat and yet enjoy a tasty meal. Adding cayenne pepper to a meat dish is a way of ensuring that one is able to digest meat easily and effectively. It helps produce mucous in the body which forms a lining in the stomach and also increases the production of saliva and other digestive juices in the body. This can be substantiated by the study conducted by the NYU Langone Medical Center which points out that cayenne pepper can be used to treat dyspepsia too. 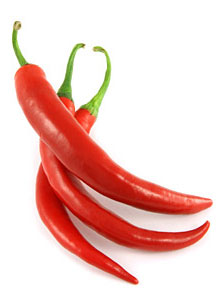 This plant has a high salicylate content, which gives it properties similar to that of aspirin. It is also known to help reduce the levels of triglyceride and cholesterol in the body, making it extremely beneficial for the heart. Since it helps keep the thickness of blood under control, it helps prevent clotting of blood. Also, cayenne pepper is filled with antioxidants and this explains why it possesses cardiovascular benefits. It is believed to help relieve pain of strains and sprains when applied externally, though it also is likely to numb the area for a while by deadening the endings of nerves temporarily. When applied to the skin externally, it lowers the amount of substance P in the body, which is primarily responsible for carrying pain messages to the brain and in the absence of which, the messages are not transported and one experiences relief from pain. With proper care, it can also be sniffed to relieve oneself of sinus congestion. It has been prescribed as a treatment for skin diseases such as Psoriasis. It is also an anti-fungal agent and is often used to help control allergies.

Many people sip on cayenne tea made using honey and lemon juice in the morning in order to detox their body. It has also been used in the manufacture of several oils and balms which when rubbed onto the skin help dilate the capillaries and increase circulation without actually burning the skin. Research done at the University of Pittsburgh Medical School pointed out that cayenne pepper may actually possess anti-cancer properties owing to its capability of checking the growth of tumors induced by tobacco consumption and liver tumors.

Effects of Using Cayenne Pepper in Excess
Though creams that contain cayenne pepper have been approved by the FDA, in certain cases, applying these creams around sensitive areas such as eyes or throat, or on open wounds could cause burning, itching and skin irritation. These creams should therefore be used carefully and are meant only for adults.

Consuming cayenne pepper in large amounts may cause irritation in the stomach and result in excessive sweating, flushing and a runny nose. In certain cases it may also worsen the problem of ulcers, heartburn and gastritis, as pointed out by studies conducted by the University of Maryland Medical Center. Other known side effects that arise due to the unmonitored consumption of cayenne pepper may include uncontrolled eruptions in normal body temperature, inability to concentrate, changes in the production of hormones, weakening of the immune system, nausea, vomiting, diarrhea, change in the color of urine and yellowing of eyes.

If a person overdoses on pills which have cayenne pepper as an ingredient, it could result in congestion of the chest, convulsions, with the blood pressure increasing temporarily and the mouth and lips swelling. Besides, a study published in the Cancer Research journal in 2010 points out to the possibility of topical application of creams containing cayenne in stimulating the growth of skin cancer.

Keeping these side effects in mind and it becomes extremely important to carefully monitor the consumption or intake of cayenne pepper. For instance, it is advised that pregnant women, women who are breastfeeding their newborn and children should be kept away from cayenne pepper or the intake should be prescribed by a health care provider. Thus, when precautions are taken and the use of cayenne pepper is fully understood, it can work wonders as a home remedy developed from a spice.