You are at:Home»Diet and Nutrition»Confessions of a Fat Girl – Helping Others Lose Weight

They say that when God closes a door, he opens a window. Well, in my case he opened up EVERY window in a skyscraper! As of February 2011, I was down about 60 pounds. I had made a decision to walk away from the life I was leading and the final stage of that meant that I had to walk away from ALL of it and understanding that this also meant purging all elements that were not supportive of my change. I had to create a harmonious balance to foster the positive energy around me. Resetting my brain to think about my future happiness began a process of elimination and inclusion. Radical changes were implemented upon anything that was not conducive to enhancing the new me.

As my personal life was emerging and having a dramatic positive impact on my whole catharsis, I also made relevant alterations to my professional career. My name is always going to synonymous with music and I will always be a singer and an entertainer. Yet, with my transformation came the epiphany that I needed to break free from the chains that were binding me down. Over the last several years, I had resigned myself to doing the same things over and over again. My events and my career had become redundant and boring. With so many changes occurring, it was a natural progression that my professional life was going to take an alternative route as well.

I was craving something totally radical, new and exciting. As frightening as it may have been at first, I also knew that being scared of the future was sure as hell 100% better than looking back. I didn’t know where I was headed, but I knew firmly what I did NOT want to do.

Being in front of thousands of people is HOME to me. It’s where I feel the greatest amount of joy and soul enhancement. I am no stranger to the spotlight. I love the stage and I thrive on making people laugh. On the advice of a long-time Elvis Tribute Artist and his wife, I began looking into the field of Motivational Speaking. They had given me the idea and had outlined the fact that I did this very type of presentation already and had been doing it for years as an emcee and the lead singer in my musical groups. It was suggested that I combine my weight loss story with my music. I could sing and talk about myself, two things that I love to do!

The research started. I went to Facebook to put the feelers out to see if anyone thought that it would be a cool idea to follow this path. The responses to that initial post were astronomical. As we knew that my weight loss journey on Facebook already had a huge following, I was directed by another writer to start a more mainstream public blog on weight loss. Again, going to FB for inspiration, I asked for a name for my Motivational Speaking Company and my Blog. Some of them were priceless, a few good hearted yet ridiculous but when a gal pal put forth the suggestion of “thinspiration”, it was like a gift of manna falling from heaven. As I turned 45 in February, I gave birth to my new career. THINspiration was born. 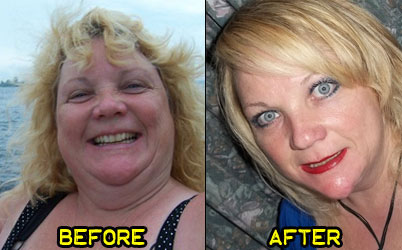 So, I set up a FB page called THINspiration which in turn prompted a friend of mine to help me design my own website. The next step was to set up accounts on various social networks and begin advertising. Word was spreading quickly about my dramatic transformation. My weight loss and walking epidemic was garnering quite a bit of attention around town. I’ve led quite the life in the public eye here in Brantford for the better part of 15 years, and everyone has known me as a large sized person who morphed into a 300 pound ticking time bomb. As I purposely set out to be very public about my overhaul, many started hitching on to my positive energy wagon.

Suddenly, without warning, requests started coming in for me to come and talk. “Whoa, hold on, I’m not even ready yet”. Although I wasn’t truly prepared and had sea-legs about the whole concept, the calls started beckoning from various weight loss organizations and health and wellness expos. Groups were talking about my presentations and I got swept up with one appearance after another.

I quickly had to come up with a THINspiration logo, a catch phrase, a business mantra and advertisements in the forms of table top displays, wristbands, t-shirts and business cards. To think of where I was a year before and to see me NOW talking about my weight loss journey and doing trade shows; it was all very surreal. From my initial get your feet wet presentation for 11 people in March; I’ve now travelled all over Ontario, spreading my message of “Put Down The Fork & Get Moving” to more than 1,000 people.

And then, God opened up another window, when out of the blue, another unexpected gift of enhancement was dropped on me. Enter AIM, the Art In Motion Dance Studio, owned by my high school buddy, Brian Sloat and his wife Kelly. Kelly called me in April to congratulate me on my success, as she and Brian had been reading about me on Facebook. Kelly said that they had been so inspired by my story that they would like to be a part of my journey and invited me to come and try out a Zumba class at their studio. Walking into AIM Studios on April 25th, 2011 is parallel to the moment that Dorothy goes from the Black & White in Kansas into the Color in the Land of Oz. All sorts of fabulous characters combined together in joy and merriment and all there for one purpose; To Get Fit Through Dance.

Through the doors of AIM there was something unique, magical and vastly different from my norm. There was a friendly welcoming atmosphere that breathed a total encouraging family of support. AIM was like finding Nirvana. There were no pre-conceived notions of who I was or who I am, they didn’t know me prior to my arrival and only knew THIS Joan; they didn’t know the fat depressed lost victim I used to be. All they knew was this Phoenix that had risen. I was among my peers with like-minded individuals who wanted to dance and shake away the cobwebs of their day for an hour or so. I made friends very quickly and with that, my social life improved expeditiously. I had finally found somewhere where I fit in. 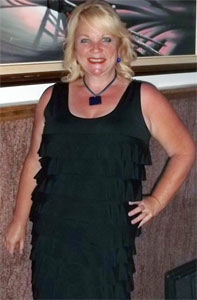 Up until I started at AIM, my fitness life had only been walking. I knew that I had to start kicking it up a notch, as I had hit a plateau somewhat. Once I added in the intensity of Zumba and DanceFit, my weight again started to fall off and my body began to firm and tone up. I finally had a figure to show off, not just a skinnier face.

Zumba is contagious and it gets under your skin like a lustful feeling of I want MORE. Having spent two years living in the Dominican Republic, I had forgotten the intoxication of Latin Music. It came back at me with a vengeance. Old familiar beats were back in my hips, my thighs, my legs and my happy twinkle toes were matched by the humongous smile on my face. The girl who got lost somewhere absolutely rekindled and got her groove back at AIM.

I have become a permanent fixture in the fitness classes, being haled affectionately as the WOO HOO girl. This past summer I joined AIM’s Latin performance dance team and we have performed at several events around town. I also braved their grueling 3 hour Zumba boot camp which lasted for 8 weeks, enabling me take my body to a 90 pound loss.

Due to the success of the Boot Camp and my THINspiration business taking off, Kelly and Brian approached me about implementing a 90 Day Weight Loss and Fitness Challenge. AIM THIN was an inevitable match. We opened up the participation to studio members and then to the public. Through the help of the Boot Camp and my notoriety, we sold out the Challenge on the FIRST day.

Every Wednesday night, I now run the AIM THIN Weight Loss group. Our AIM THIN peeps unite together to weigh-in, meet, and workout and strive towards healthier excellence. We will move into Phase II in the New Year. Through the success of AIM THIN, I’ve also been invited to start another weight loss group here in Brantford, at another location, which is also being supported by my Art In Motion team, whom have united with me in my THINspiration movement.

It’s been an incredible super duper year. Perhaps the best EVER! As of the end of October 2011, I’ve lost 105 pounds. My body has transformed and dropped 10 dress sizes. There is no denying that I look incredibly younger. I have an insatiable abundance of energy and happiness exuding from my shrinking body. I want to shout HALLELUJAH at every moment of the day. Something that is invigorating me to even greater heights is that I’m going back to teaching fitness classes as I get my Zumba license in December. There is no stopping me.

I started my weight loss journey in August, 2010. I dreamed of what life would be like a year from that moment. Full throttle to a year later and HERE I AM running my own weight loss support groups, hosting health and wellness workshops, speaking in various cities about the power of changing fat into FIT, and encouraging the world to Put Down the Fork and Get Moving while choosing life on the magical train of THINspiration.

14 months ago, a very unhappy at the end of her rope woman stood in front of her mirror, with tears streaming down her face. She was feeling totally beaten. Life had passed her by. She vowed to change her life. She has!