You are at:Home»Diet and Nutrition»Confessions of a Fat Girl – How I Turned My Life Around

Forty four years of being overweight makes you an expert on being FAT. I know how to be fat, how to stay fat, how to avoid fat, how to not be fat, and how to coexist with the security blanket around me, which IS fat. I know everything about being a fat person. I have lived that life for 99% of my time here on the planet earth. I’ve tried every diet out there and while I’ve had success, it was only fleeting. Every Monday was a new promise of “Today is the day I lose weight”. It wasn’t until I changed that mantra into “Today is the day I choose to live, that the answers became clearer.

“I have a choice? I choose? Me? I’m in control? But that’s not possible, it’s the fault of the food, the blame is on that person that hurt me, THEY are in control, not me! No, this can’t be true.” But it WAS all about me and ONLY me. No gimmicks, no fancy pills, no expensive shakes, no bank account breaking yearly memberships to weigh-in and buy their pre-packaged foods, just ME. I had the power. After all, it was ME that was responsible for the years of neglect and abuse on my body. I got myself that way.

Being a fat expert also gave me a card carrying lifelong membership in the Carbohydrate Addict’s Hall of Shame. I ate non-stop on junk food, deep fried foods, and weekly dates with famous fast food chains and late night binges at the drive-thru. Make no bones about it, there was only one reason I was fat, I ate. I am a food addict, I love eating, I love food and I lived on the fat side of the cupboard where all the treats and chips called my name in unison.

The moment I woke up, the light went on in my soul. All of me was finally listening. The voice I had been blocking out for decades, which never gave up, finally emerged victorious, “Over HERE Joan”. And over here was my bedroom mirror with me staring right back at me. “You will never look and feel like this EVER again. We’ve seen you at your worse; let us see you at your best”.

I had gone through the most embarrassing moment of my entire existence. I had come face to face with my own mortality and the fork in the road had been jabbed right between my eyes. When my journey began on August 27th, 2010, I KNEW what choices I had to make. Remember, I AM THE FAT EXPERT. After a lifelong in the trenches of the fat battle, I was well versed in what changes needed to be made. I always knew that the changes were simple…. 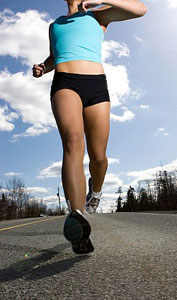 It is my stringent steadfast belief that MY success has been mainly due to the fact that I got up and started moving and my mode of exercise is walking. I walk every day unless its thunder and lightning. Living in Canada it also means that there are four really bad months of snow and ice. But I got out there from the onset and walked every day, rain or shine, snow or sleet, hail or storm; at least 45 minutes every day. And I did the bulk of my walking in the evening, after supper, which helped curtail my lifelong habit of eating at night. As the summer switched into Fall and then into Winter, I became addicted to the moonlight air which acted as a tonic as I was breathing in the healthy crisp beautiful Canadian air into my lungs, while my body was being exercised on a regular basis for the first time in 15 years. I eventually added more fitness to my routine, but that came LATER and will be detailed in Part 3 of this series.

Once I began controlling my eating habits and started walking, I have to say the results were almost immediate. First noticeable side effect of dieting was that suddenly the heart-burn and late night acid reflux had disappeared. I used to inhale antacid pills. After only a few short days, I noticed that the bottle hadn’t been touched. There was only one answer to the WHY it hadn’t been touched; I had changed what was curdling my stomach. The days turned into weeks and the weeks into months. I was doing it. I was succeeding. I was in control and it was working. Fresh air, healthy eating, walking every night after supper, the weight began to fall off. It was as if the fat was jumping off of me leaving greasy splashes on the pavement behind me as I walking. “Ker plunk and Bubye”.

The pancreas attacks that were happening at least once per week suddenly were gone. I’ve only had two attacks in the last year, and only lasting for brief amounts of time. The acute vertigo that sent me to the medial clinic in Hamilton seemed to be a thing of the past. To be honest, as of October 2011, I’ve only 3 bouts of vertigo in 14 months. Migraines stopped, my skin cleared up, endurance increased and my overall health was on a rapid incline of success. I was feeling fabulous.

At almost 300 pounds when I started, it wasn’t long before people began noticing that “some” thing about me was different. My face was the obvious first part of me that showed the impact of the weight loss. As the fat cheeks lessened and the triple chin became a double; several friends were making positive comments. My clothes had begun to sag and were being made to fit me with safety pins and belts. Old clothes were now fitting me again and were turned into NEW clothes.

I had my first public appearance in an entertainment setting, in November 2010; three months after my journey began. By this time, I was down 30+ pounds and people began coming up to me fast and furious and making favorable comments and asking questions. As my health was improving, I had also undergone a complete aesthetic overhaul. I wanted a change and it came via my hair, makeup and wardrobe. I started liking being PRETTY and dressing like a girl. For the first time, I suddenly really liked myself.

Apart from the healthy choices and walking, another component of my success has been in the commitment to going VERY public with my weight loss plight. I needed a forum. I’m a Facebook fanatic, so the support group I needed was available right in front of me on my monitor screen and my keyboard. I began blogging on Facebook with monthly updates on my progress and once my first IN PROGRESS photos were posted, after the performance in November, friends and colleagues starting hitching onto my healthy journey train.

Facebook meant that I had 2,000 people to answer to and while I relied on them for support and to be my sounding board, they were putting their faith in me and relying on me to finish what I had started. My quest turned into a mutual admiration society and a deep-rooted desire to prove my supporters RIGHT.

It’s amazing how just a simple change in your appearance can have a resounding effect on most other aspects of your life. Self-confidence builds, you start to carry yourself in a different manner and you even start to talk differently, which may be in part, due to the other changes working together. Your body changes along with the belief in yourself. And let’s be totally blunt and brutal here, .a healthy body DOES work differently. A healthy body is full of vim and vigor and exuding positive energy and releasing that into the system. Keeping that in mind, a healthy body with a healthier state of mind gives you the power over yourself. Suddenly, you are in control and that control takes over every part of your being. And what used to buckle your knees in despair now brings you to your knees in prayer. 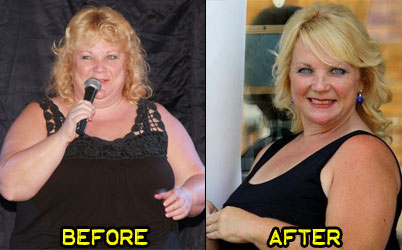 However, it hasn’t all been sunshine, lollipops and rainbows. I suffered an emotional set-back near the end of 2010, when a parallel upheaval in my personal life presented itself, yet again, almost verbatim as it did in 2009. This SHOULD have derailed me. Had it have been the previous year, I would have failed. Yet, I kept on track, mostly due to a few friends who saw me drifting and caught me. I hadn’t turned to food but I was getting anxious and afraid that it would become a challenge to stick to the plan, as the outside demons were pulling on my heartstrings. However, a stronger inner resolve coupled with an unshakable commitment to a healthier life, led me to find the strength to forge ahead. And I walked away from the source of the pain. That decision, all but crushed me. Yet, I did not go off of my plan. I survived and soldiered on. As my friends saw that I was able to get through that crisis, it proved to all of us that I had crossed the bridge to recovery. I had slaughtered the dragon and while wounded, I was healing.

It also paved the foundation for my resolve in later having to deal with some unexpected negativity that came at me like an out of control wild fire sparked by a vicious tornado of jealousy and sheer bitter evil. Sad to say this, but I was faced with the universal phenomenon of thousands of weight loss success stories; If you want to know who your friends are NOT….lose weight. (I will be detailing this in a future article).

Yet, despite any degree of skepticism and a few people’s pathetic attempts to rain on my parade, I can happily shout that 2011 has been one the greatest and most fulfilling years of my adult life. The best part of this entire journey was in my deep-rooted necessity to not only better my health, but to completely overhaul my entire landscape.

Taking in account all of the changes surrounding me and the onset of the hatred lurking in the shadows; I knew I was at a crossroads. My health and appearance had improved, but there was still something missing. I had a new belief in myself to do the impossible. Yet, I still didn’t feel complete. I had spent the last several years not being happy. My weight was coming off, but I still felt somewhat lost inside. I was going through my daily routine without a purpose. I guess it would be easiest to say, that my music had died.

In February of this year, after much soul searching, I found myself making the final yet most necessary evolution to my metamorphosis. I knew what I had to do. It meant making a life altering decision to walk away and leave the entertainment business I was presently within and take a new direction.

My heart was heavy and I was apprehensive and suffered a great deal of stress over the decision. However, I knew how strong I had grown. I had come through a 3 year ordeal of declining health along with a personal hell and survived. I could get through anything.

And that’s where my journey began to take on a life of its own. I’ve said it from the onset, there is a greater force driving my boat. And it must be mentioned that this began happening at warp speed once I found my way back to Church and rekindled a relationship with God. Not preaching, just teaching. It’s a true testament of my life in 2011. They say that when God closes a door, he opens a window. Well, in my case he opened up EVERY window in a skyscraper!