You are at:Home»Diet and Nutrition»Is Drinking Coffee a Healthy or Unhealthy Addiction?

Two Considerations
The debate over whether drinking coffee is a health-enhancing ritual or a detrimental addiction continues to brew. Given that we Americans consume 400 million cups of coffee daily, it only makes sense to examine closely the effects of drinking those unassuming cups of Joe.

The second consideration is the recognition that consuming coffee may be beneficial with regards to some health goals and detrimental with regards to others. For instance, consuming coffee may enhance a fitness program while it may interfere with fat loss efforts. It is only within the parameters of these two considerations that an accurate assessment of one of America’s most beloved habits and decidedly maligned addictions can be made.

The Benefits of Coffee’s Non-Caffeine Components
Much attention by medical professionals has been given to the health-promoting benefits of drinking coffee over the last two decades, and the majority of coffee’s proven benefits and therapeutic uses has been linked to the high level of antioxidants found in its beans, which are actually the seeds of the deeply red-hued coffee cherry fruit. The significant presence of these antioxidants, which mop up the damaging free radicals implicated in the development of cancer, heart disease, degenerative brain disorders such as Alzheimer’s, and plain old aging, is found in the coffee bean’s chlorogenic acid.

The most recent studies reveal that the American staple’s caffeine component may enhance the benefits of its non-caffeine components, which explains coffee’s role in providing significant protection against gallstones, liver disease, Parkinson’s disease, and Type 2 Diabetes in addition to cancers of the bowel, pancreas, and bladder. Again and again an inverse relationship between coffee consumption and the incident of these diseases have been proven. Participants in most of these studies who drank more than four cups of coffee had a significantly lower risk for these diseases than nondrinkers.

Ironically, the results of such studies conducted prior to the early 90s actually hinted at a correlation between coffee consumption and the above mentioned cancers. One reason behind this miscalculation was that certain denominators, which are more prevalent in coffee drinkers than nondrinkers such as smoking and decreased inclination to exercise or take a multivitamin, were not factored into many earlier studies. Once these health-defeating behaviors were targeted as the cause for increased cancer incidence in coffee drinkers rather than the habit of drinking coffee itself, then the accurate relationship between coffee consumption and the incident of these cancers became clearer.

Perhaps the most exciting news regarding the protective powers of coffee is the recent discovery that increased consumption in combination with exercise and weight control decreases the chance or at least delays the onset of Type 2 Diabetes in adults. In a recent U.S. study conducted over a period of 18 years, men who drank six or more cups of coffee per day decreased their risk of Type 2 Diabetes by 50 percent. Women in the same study showed a 30 percent decrease in developing the disease. Not insignificantly the onset of Type 2 Diabetes decreased in participants who drank decaffeinated coffee as well, but much more moderately at 30 percent and 15 percent for men and women, respectively. Such numbers speak to the health enhancing power of the non-caffeine components of coffee while suggesting that the addition of caffeine creates a synergetic effect leading to a greater benefit. With a projected 300 million cases of Type 2 Diabetes by 2025 (twice that of the latest figure in 2000), some doctors have begun to prescribe an increase in coffee consumption in addition to weight control and exercise as an effective strategy in slowing down this growing epidemic.

While the virtues of the coffee bean’s chlorogenic acids cannot be denied, two other components-oils, known as cafestrol and kahweol, have tentatively been associated with the rise of LDL cholesterol levels and consequently an increased incidence in heart disease among imbibers, perhaps by as much as 20 percent. Such a statistic is a buzz-kill until we learn that neither cafestol nor kahweol can pass through the filtering process normally used in the preparation of coffee. 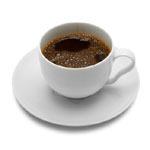 Raw coffee beans pack-perhaps surprisingly twice the oxidative punch than that of the much revered green tea leaf. But since very few of us chew on raw coffee beans, it is essential to understand that certain methods of brewing maintain the integrity of coffee’s overall antioxidant power while protecting us from any of the bean’s potentially negative components.

In general roasting raw coffee beans reduces some of their original green antioxidant power; however, roasting also increases the production of certain other brown antioxidants. Medium roasted coffee appears to maintain its antioxidant power slightly more than either light or dark roasted coffee beans. The beneficial chlorogenic acids easily pass through either metal or paper filters, and as far as the unfavorable oils are concerned, it is only when coffee is consumed without first undergoing the filtering process (as is the case for espresso, boiled, or French-press coffee and even then only when consumed in large quantities) that the beverage poses a risk. Instant coffee has been shown to contain only traces of these oils.

Another legitimate concern regarding coffee is the pesticide residuals found in many commercial beans. Interestingly such carcinogenic residuals are higher in decaffeinated coffee which has been necessarily subject to a highly chemical process in order to extract the bean’s caffeine component. Using only certified organic or shade-grown beans (neither of which are sprayed with pesticides) ensures less exposure to potential toxicants.

The Benefits of Coffee’s Caffeine Component
As far as the benefits associated with disease prevention goes, the caffeine in coffee plays the role of sidekick, but when it comes to mental and physical performance, caffeine is the star. The well-known benefits of taking in as little as 80-90 mg of caffeine (one cup of coffee contains approx. 200 mg) include an increase in mental alertness, focus and concentration, and of course caffeine’s wake-up factor is legendary. Caffeine also proves useful in remedying both jet lag and the afternoon slump that most workers experience at least occasionally making them more productive on the job. Some new studies suggest that caffeine may have a mood-enhancing effect on those suffering from depression, and as an effective pain reducer, caffeine is a common ingredient in many over the counter pain medications.

As mentioned earlier, drinking coffee must be judged in terms of our particular health goals. If increased endurance and intensity levels while working out are goals, then the caffeine in coffee is a powerful weapon in the fitness enthusiast’s arsenal. It is not an accident that caffeine often headlines the roster of ingredients in common performance enhancers and supplements as caffeine has been shown to have a slight effect on the metabolizing and utilization of lipids for energy, particularly during exercise. The central nervous stimulant also decreases the perception of fatigue and discomfort during exercise, which is a boon for those who loathe the activity as well as for those who are looking to take their workout to the next level by exercising longer and harder. The alkaloid is a ubiquitous ingredient in fat burners, as well, due to its short-term ability to suppress appetite.

The Risks Associated with Coffee’s Caffeine Component
The majority of grievances against caffeine lies mostly in its immodest use. For instance, the majority of performance-enhancing and fat-burning products on the market direct users to ingest dosages that include upward of 1000 mg of caffeine per day. Such high dosages even in the short-term are connected to anxiety, sleep disturbance, dependence and severe withdrawal symptoms when usage ceases. Overdoing it with caffeine promotes quick rises in blood pressure and heart rate as well.

While caffeine in fact has been shown to have a positive effect on both endurance and intensity levels when it comes to exercise, it ironically may stand in our way if weight loss is the goal. The reason behind this is that caffeine increases the body’s production of myriad stress hormones, including cortisol, which causes the body to store fat particularly around the midsection. Cortisol also incites a wave of undesirable aging effects. Because of this diet gurus almost always suggest replacing coffee with green tea, which has less caffeine per serving, in order to avoid the production of cortisol as well as the ensuing insulin rise and crash after caffeine’s buzz has run its course. This crash notoriously induces feelings of hunger and might possibly further promote fat storage.

There is some concern, too, about the leaching of calcium from bones or caffeine’s interference with the absorption of other important minerals, though coffee itself contains traces of magnesium as well as potassium in a larger amount. Some medical professionals counter that this concern is overemphasized if one takes in adequate amounts of these minerals through diet. The diuretic effect of coffee also comes under fire as it may lead to dehydration. According to experts coffee enthusiasts can sidestep this risk by drinking extra water throughout the day, and some experts claim that the diuretic effect is balanced by the water content of the coffee itself.

worked with Equinox gyms in New York after completing graduate school. She is also a freelance writer. I'm a certified Pilates instructor and a certified personal trainer. See my profile page for more information!