You are at:Home»Diet and Nutrition»Giving Up Dieting – Avoid Restriction and Follow a Healthy Diet

They say you are what you eat. Maybe this is the case in the literal sense, but is it in the metaphorical? I have a personal deep down disdain for diets that is akin to people who drive on the interstate for 10 miles with their left turn signal flashing away.

Please understand that I have nothing against making changes and eating healthier. I just don’t think we have to use an eating philosophy that makes a scoop of ice cream out to be the root of all things wrong in the world. I believe there is room for nearly any sort of food in a healthy eating plan, but some folks really don’t like me to say that.

Often, I would get some sort of backlash that would be peppered with the type of words that would suggest I just punched someone’s sainted mother. The dieters were not happy with me saying things like you can have some cake, just not too much of it.

I can’t say I blame them though. Back when I was following one diet or another and someone suggested it wasn’t correct, I felt offended. Sometimes deeply offended. I simply felt offended because for someone to attack my diet was the same as attacking me.

Adopting a diet meant adopting an identity. If I ate certain foods and not others, it meant I was part of a club of folks who could pat themselves on their back for sticking to a diet. It gave me the sense that I was doing something important. It made me feel special, unique, smart (because I was smart enough to not eat anything on the black list) righteous and strong. It also gave me a sense of superiority over others. I’d always had low self-esteem and if I couldn’t run faster, lift heavier or look better than my peers, well then by golly I was going to eat better than they did.

I knew it was not okay to feel superior to someone because of their gender, religious preference or skin tone. Yet somehow I felt okay to say I was better than someone because I didn’t have a slice of pie. Man! How truly messed up is that? 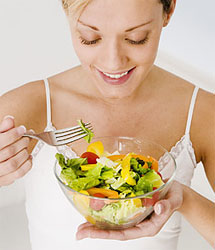 But this was the lure of the diet for me, and the more restrictive or strict the diet was, the greater the lure. Sure, there is science and research backing up the beliefs of the diet, but lets keep it all in perspective. Eating candy may give a sugar rush, but that’s it. It doesn’t make anyone a certain type of person nor influence their moral fiber. It is after all a piece of chocolate, not an underground arms deal.

When I gave up dieting, I didn’t change. My self-discipline didn’t change, my character didn’t change and my worth as a human being certainly didn’t change. I wasn’t any more or less spiritual or concerned about the environment either. I was still just plain old me, only this time I didn’t have an anxiety attack over a couple of cookies.

The best part of giving up dieting was that it gave me so much more energy to devote to the things that really did improve who I was as a human being. I put more time into learning, growing and maturing my skills and talents. I could focus more on how I relate to people and their deeds, rather than just what foods they ate.

The false promise of many diets is they offer more than just a way to nourish the body. They allow us to see ourselves and others in a different light. I believe it’s a light that is constructed out of fear, anger, oppression and doubt. Just like racism and other forms of prejudice. Food simply does not deserve this power over our minds. Eating healthy is important, but it’s not the foundation of who we are. You can follow a great diet and be a world-class jackass. You can also eat lots of junk food and still be a saint for millions of people.

Food is just food.  It provides nourishment and satisfaction. We can’t ask it to do more than that and yet, I always felt like the classic good-food-bad-food diet was trying to be so much more. It was supposed to make me super strong in both body and mind. It was supposed to make me loved by all and accepted by my peers. Most of all, the diet was supposed to give me a sense of control over food and therefore my body, mind and life as a whole. Instead it made me grumpy, stressed and my friends grew sick of my whining about how I felt guilty over eating a hot dog at a hockey game. Most of all, I never felt in control because ultimately I wasn’t the one in control. The diet was the one in control.  It was in control of my moods, my emotions and my identity. If I ate a salad for lunch, I was super cool, fit and strong. If I cheated and had pizza, then I was weak, fat and lazy.

Once I gave up following a strict diet, I realized that the food on my plate did not make up the pieces of my worth or identity. It simply composed my lunch.

In my upcoming article, I’ll cover some of the basic food rules I follow to eat healthy without ever needing to stick to a diet.