You are at:Home»Diet and Nutrition»Green Tea for Fat Loss – Boost Thermogenesis To Lose Weight

The medicinal properties of green tea have been studied and described for thousands of years, but it seems that in the recent years it has been discovered and shown to aid and support weight loss by increasing the metabolism and promoting fat burning.

It seems in the last decade or so, green tea has been receiving increased popularity due to its role in promoting healthy weight management. Green tea has been found to increase the oxidation (break down) in fat.

Research has suggested that perhaps green tea polyphenols know as catechins, and green teas principal catechin, EGCG, may work together to promote weight loss, fat loss and weight management by: 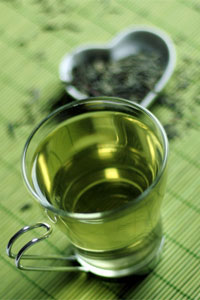 A study reported in the American Journal of Clinical Nutrition discovered that green tea extract resulted in a significant increase in metabolism boost. It also has been found that green tea helps fat absorption and glucose regulation. Another finding showed that green tea may reduce appetite.

So How Much Is Enough?
Depending on the brand, 2-3 cups of green tea per day (for a total of 240-320 mg of polyphenols) or 100-750 mg per day of standardized green tea extract is recommended.

Another source claimed that green tea demonstrated health promoting benefits in dosages ranging from 2-10 cups. They continue to state that optimal doses are approximately 1,400-2,800 mg a day of green tea extract with a minimum 95% polyphenol content, which should be taken with meals.

As you can see there are two sources and two dosages. I would think it would be wise to start small and find the dosage that works for you. We are all individuals with different metabolisms, medical issues, and tolerance levels. We all need to find our Individual dosage that is effective, that works and is preferably under a doctor’s care and advice.

Precautions
The use of herbs has been around for thousands of years. The use of herbs has been shown to strengthen the body, and also treat various diseases. However, these herbs can contain active substances that may trigger adverse side effects or cause interaction with other herbs, medications, or supplements. Know what you are taking and know what you are mixing your medication, herbs, and supplements with. Always consult with your physician. More than likely, green tea will be fine to supplement with, but it’s better to ask then to assume.

One warning stated that people with heart problems, kidney disorders, stomach ulcers, and psychological disorders (particularly anxiety) should not consume green tea. This could be due to the tannins, caffeine, and other elements that may cause an adverse side effect. It has been warned that people who drink high amounts of caffeine (including caffeine from green tea) for a prolonged period of time may experience insomnia, irritability, and heart palpitations.

So there you have it. Research, studies, warnings, precautions and variables in dosages. I say continue with your own research and come to your own conclusion and then go discuss it with your doctor.