You are at:Home»Diet and Nutrition»Ground Beef Recalls – Learn The Health Risk Factors for E. Coli

With over 260,000 pounds of ground beef recalled already in 2011 due to E.Coli contamination, it seems there is an ever-increasing risk to our health. So how does E.Coli get into our food chain? What risk does it pose to our health? What preventative measures can you take against this killer bacteria?

Some of the beef recalls in 2011 due to possible E.Coli 0157:H7 contamination so far include:

Although meat contaminated with the E.Coli 0157:H7 doesn’t smell, you will quickly know if you have been affected by the bacteria. Symptoms include: diarrhea, fever lasting 5-10 days, kidney failure, severe dehydration and even death. 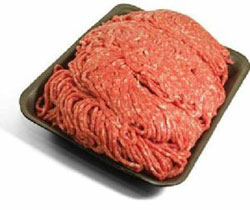 How does E.Coli get in our food chain? Traditionally, all cattle were grass-fed beef. Cattle are ruminants, this means they have a rumen which allows them to process grasses, which humans can’t, into foods that we can digest. It wasn’t until after World War 2 that the majority became corn-fed which is what you’ll find commercially, whether in the supermarket or a restaurant, unless you are actively seeking an alternative. Corn fattens the cattle quickly. 75 years ago, cattle were slaughtered at 4-5 years of age but today they are slaughtered at 14-16 months due to the introduction of corn along with protein supplements, antibiotics, growth hormones and other drugs in their raising. They can be produced year round and cheaply. All of this makes it more profitable as costs are low and turnaround is quick.

The change from farming to factory processing began in the 1940’s with the introduction of fast food drive thru’s. The problems started when they wanted all of their hamburgers to taste the same, which has changed the way our foods are produced. The popularity of these companies led McDonald’s to become the largest purchaser of ground beef in the US (Food.Inc 2005). Now the pictures in our supermarkets of idyllic farms on products are spinning an image that no longer exists with non-organic, grain-fed meat production. The truth of it is factory assembly lines with big multi-national corporations controlling the entire food system from seed to the supermarket. As mentioned in the movie ‘Food.Inc’, in the 1970’s the top 5 US food manufacturer’s controlled a mere 20% of the market. However, today the top 4 control more than 80%! Increase in productivity, scientific and technological developments may have increased food production but it’s also increased the hidden dangers and risk of contamination. According to the Centers for Disease Control and prevention in 2010, they estimated food borne diseases cause approximately:

So why is corn the main component in cattle feed? If you trace most foods back, you’ll keep coming back to corn. The government subsidizes the production of this commodity that can be easily stored which allows them to produce corn below the cost of production! The feed operator can then buy corn at a fraction of what it costs to grow and feed the nations huge appetite for meat while keeping the consumer price of meat down. 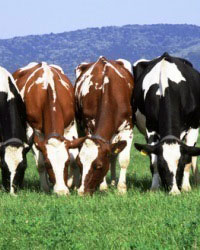 Cattle (that aren’t grass-fed) are raised in CAFO’s; Concentrated Animal Farming Operations. These cramped living conditions free up land for corn production. A steer or heifer’s rumen is or should be PH neutral, but the high corn diet they are fed in CAFO’s makes it unnaturally acidic. This results in a new acid resistant, more harmful E.Coli: 0157:H7 that was never in existence before. This new strain of E.Coli is one that the human stomach can’t kill! We can fight off a certain amount of E.Coli without even noticing, but if there are multiple in the meat you consume you won’t be as fortunate. E.Coli 0157:H7 has rapidly increased since it was first seen in the 1980’s, to today when it’s “in the intestines of nearly every US feedlot cattle” (qtd. Craig W Walsh). By acidifying a cow’s gut with corn, we have broken down one of our food chain’s barriers to infections and something that wasn’t in existence before is now in our food system.

Besides the corn diet, feed lot life also contributes to the increase in E.Coli. Those cows not infected by the corn diet can easily become infected by the others that are as they stand ankle-deep in their own manure all day. The slaughter houses are another contributing factor. The number of slaughter houses has decreased dramatically. The actual number is unclear as different sources slate different statistics but the point is with fewer houses operating, speed has to increase and quality decrease. ‘Food.Inc’ says there are only 13 houses, with a slaughter rate of 400 manure caked cattle per hour they can’t prevent the manure getting on the meat (qtd. sustainabletable.org). With such a high, fast slaughter rate, one burger can contain 1000’s of different carcasses making your chance of getting E.Coli much higher than if it was just from one source.

It’s not only beef that’s being recalled due to E.Coli outbreaks but spinach, apples and other produce too as the run-off from the CAFO’s enters our water systems.

These large food manufacturers don’t look back to see what’s wrong but instead come up with high-tech solutions to fix the problem. If the cattle were grass-fed, even just 5 days before slaughter, it would allow the cattle to shed a majority of the E.Coli. Instead they continue to feed it corn and treat the meat with ammonia and ammonia hydroxide to kill the bacteria. The finished result is now hamburger meat filler that’s been cleaned with ammonia to kill the E.Coli. This meat is what makes up a large percentage of hamburgers in the US.

The expense of buying grass-fed organic produce or supermarket food means many low-income families or people with very little time, resort to fast food. You can find cheap chips, sodas and candy but not fresh produce. A cheeseburger can cost $99 cents which is less than a head of broccoli because the food system is skewed heavily by subsidies towards bad calories (Food Inc). 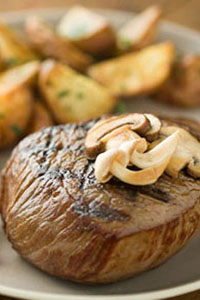 Grass-fed beef has many benefits over corn fed. This benefits your health, the environment and the animals since they aren’t forced to live in confinement, standing deep in their own manure. Grass-fed is up to 4 times higher in Vitamin E, higher in Omega 3 fatty acids and rich in linoleic acid. On the downside, the omega 3 and lineolic acid can give the meat a distinctive flavor which some people find undesirable as they are more accustomed to the saturated fat of well marbled corn-fed beef. The land on which they graze also pollutes water, erodes topsoil and releases methane into the atmosphere. Although still healthier, more humane and more environmentally sustainable than corn-fed (remember grass-fed cattle does not mean organic) it may still have grazed on land that has been treated with fertilizers and pesticides and still uses a high amount of fossil fuel in production. While grass-fed organic meat doesn’t guarantee untainted meat, there are no antibiotics or hormones used. The safest option is organic grass-fed meat.

Here are a few preventative measures you can take to lower your risk of being infected by dangerous levels of the E. Coli 0157:H7 bacteria:

You can stay up to date with all current meat, poultry and processed egg product recalls and health concerns at the USDA website.

I'm a qualified Certified Personal Trainer and Sports Massage Therapy. After graduating from Premier International I went on to work for Fitness First and Dax Moy, London and am on the Register of Exercise Professional (REPS). See my profile page for more information!