You are at:Home»Diet and Nutrition»Sports Nutrition – Eating Carbs and Protein During Exercise

“Hitting the wall” is the unwelcome sensation that you feel when your body has depleted its energy stores, and this unpleasant feeling usually marks the end of an exercise session. To avoid this mental and physical drain and the subsequent forced down time, it is critical to refuel your body during endurance exercise. Consuming enough calories during high-intensity or long-lasting lower-intensity exercise is vital because it provides your body with a constant supply of energy. In the case that you don’t consume enough calories, you risk burning muscle mass as energy, experiencing less than optimal performance and premature fatigue, and developing illness.

Carbohydrate Consumption During Exercise
In order for moderate exercise to continue for more than 90-120 minutes, you must take in carbohydrate during exercise to delay the onset of fatigue. The time it takes before the body’s fuel stores become exhausted, known as the time to exhaustion (TTE), may be extended by as much as 60 minutes when adequate carbohydrate is consumed during exercise. Furthermore, at exercise intensities between 65% and 85% VO2max (aerobic capacity) fatigue appears to be related to a low muscle glycogen (stored fuel) concentration. 2 VO2max can be defined as the maximum amount of oxygen that a person can extract from the environment and then transport and use it in the tissues to produce energy.

The consumption of carbohydrate during exercise causes the body to step up insulin production which, in turn, reduces the amount of cortisol that is produced and lessens protein breakdown. In other words, when carbohydrate is consumed during exercise, the body releases more insulin into the blood stream. (Insulin is needed to properly utilize the energy stored in carbohydrate.) The insulin lowers the amount of cortisol that is produced, which limits the breakdown of protein. Cortisol is a hormone produced by the body’s adrenal gland when blood sugar is low and during very intense exercise, such as heavy weightlifting. The major function of cortisol is to generate fuel for working muscles by breaking down muscle. The more difficult the training session is, the greater the amount of cortisol is released, and the more protein is broken down. Ivy and Portman state that the anabolic (muscle building) benefits of exercise can actually be erased by the catabolic (muscle destruction) effect of cortisol. (See Diagram 1 for more information about cortisol’s effect on muscle.)

The catabolic effects of cortisol can be reduced when you consume high-glycemic carbohydrates during exercise. A food’s glycemic index refers to the rate at which the carbohydrate is converted to sugar and enters the bloodstream. Consuming foods that have a high glycemic index suppresses cortisol production because the food is quickly metabolized into sugar, which sharply raises blood glucose (sugar) and increases insulin levels. Elevated levels of blood sugar and insulin limit the amount of muscle that is broken down. (See table 1 for popular high-glycemic index carbohydrate.)

Carbohydrates that have a low-glycemic index (whole grains, nuts) require longer to be metabolized, thus cause a gradual sustained rise in blood sugar, a benefit for diabetics. 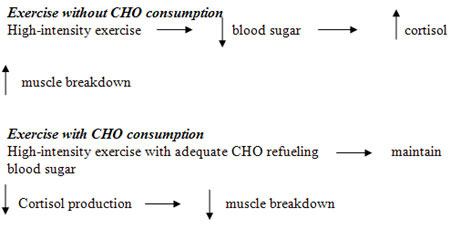 While unbleached, untreated, and unprocessed whole foods should be at the basis of any balanced nutrition plan, carbohydrate drinks may be superior to whole foods during and immediately after exercise. Liquid meals are absorbed faster than whole foods and are, therefore, delivered to the muscles more quickly. Liquid meals have been shown to be fully absorbed within 30-60 minutes after ingestion. Whole foods can take hours to be digested, meanwhile required nutrients are held from tissues in need. (See Fat intake during exercise below.) 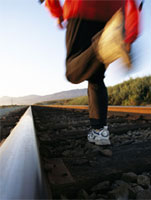 Muscle is broken down during exercise as a result of several mechanisms: physical forces and stress on the muscle fibers, such as the high-impact nature of running; the degrading effects of the hormone, cortisol; and as a result of free radicals produced during exercise. Research supports that by consuming a carbohydrate plus protein food or drink during exercise, the breakdown of muscle tissue is less than when ingesting carbohydrate alone. Because the body prefers to utilize dietary protein, the existing muscle is spared.

It is a popular notion that proteins that are rich in branched chain amino acids (BCAA), i.e. leucine, isoleucine, and valine, when consumed during exercise can provide energy and prevent muscle breakdown. At this time, studies have been inconclusive to support this theory.

Suggestions for snacking during exercise:

Fat Intake During Exercise
The consumption of fat-rich foods during exercise is discouraged for several reasons. Because fat requires a longer time for digestion, it can remain in the stomach for up to 4 hours before it makes its way into the small intestine. This extended digestion can create feelings of fullness and stomach discomfort among exercisers. Longer digestion time also means that the energy derived from these foods is not available as quickly.

It is important to eat small amounts of nutrient-dense, fat-rich foods, i.e. raw nuts and seeds, avocados, as part of your daily training diet. These foods provide the body with necessary fatty acids, fibers, and micronutrients not available in carbohydrate or protein, as well as calories needed for training.

Conclusion
You can see that eating during exercise is crucial to refueling your body on the go. Replenishing your energy stores can be as simple or as involved as you want it to be. This information provides you with a basic understanding of the types of foods that are required during exercise. You can mix and match them to suit your specific needs. Be sure to test-drive the foods you eat during exercise before the event day, just in case.

And, remember that what you eat at non-event times is as important as what you eat during your exercise. Your daily training diet needs to be plentiful in nutrient dense, whole, unprocessed foods for you to put your best foot forward.

Peggy Kraus, RCEP, MA has a Masters degree in Professional Physical Education from New York University and is an American College of Sports Medicine Certified Registered Clinical Exercise Physiologist. She has worked in both cardiopulmonary rehab and in commercial fitness, and she has more than 15 years of experience in guiding people to better health through positive lifestyle changes. See my profile page for more information!