You are at:Home»Diet and Nutrition»Sugar Alcohols – Facts About Reduced Calorie Sweeteners

Nutrition labels are getting harder and harder to decipher. First we were told to count calories, then to monitor fiber, to track “net carbs”, and more recently to look at “sugar alcohols”. Their name is appealing. One could suppose that sugar + alcohol = a daiquiri. However, sugar alcohols don’t contain any alcohol. They are naturally occurring in fruits and vegetables, but can also be commercially produced from sucrose, glucose, and other similar carbohydrates.

Sugar alcohols contain fewer calories (1.5 – 3 calories per gram) than sugar (4 calories per gram). They also add texture to foods, retain moisture, prevent foods from browning when they are heated, add a cooling effect to the taste of food, and do not cause tooth decay because they aren’t acted upon by bacteria in our mouths.

One of the main reasons that sugar alcohols have become so prevalent is that they don’t affect blood glucose levels in the same way that sugar does. They don’t cause a spike in blood sugar because once they are absorbed, they are converted to energy by processes that require little or no insulin.

For those who are concerned with their caloric intake, the American Diabetes Association has published a guideline to estimate how much carbohydrate each serving provides. For food that has more than 5 grams of sugar alcohols, subtract half of the grams of the sugar alcohol from the total carbohydrate count. The remaining grams of carbohydrates are the amount you should count in your meal plan.

For example, the nutritional facts for the protein supplement bar listed below show 12 grams of sugar alcohols and 20 total grams of carbohydrates. 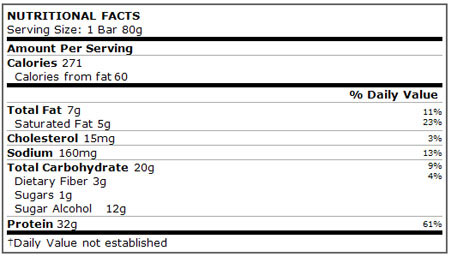 You can see that the sugar alcohol content (12 grams) is listed under “Total Carbohydrate”, and also that the individual sugar alcohols such as maltitol and maltitol syrup are reported in the ingredients. The manufacturer of this protein bar, as many do, chose to do so voluntarily. However if a product is labeled “sugar free” or “no added sugar”, the sugar alcohol count must be listed separately, and is most often under carbohydrates. Each sugar alcohol used will also be included in the product’s ingredient list.

Some of the more commonly used sugar alcohols are:

It is important to note that sugar alcohols are not new to manufacturers. They have been used since the 1960s in chewing gum and hard candy, cough syrups, toothpastes, and mouthwashes, just to name a few products. Sugar alcohols are regulated by the Food and Drug Administration, and are considered food additives.

However, sugar alcohols are not the perfect food. The most common side effect is the possibility of bloating, diarrhea, and flatulence when more than 20 – 50 grams a day are eaten. This varies with each person and their individual diets.

The American Diabetes Association reports that some people with diabetes, especially Type I diabetics, have found that their blood sugar rises if sugar alcohols are eaten in uncontrolled amounts.

And for all dog owners, it is important to note that xylitol is extremely dangerous to dogs. Even a very small amount can quickly cause severe liver damage and/or death.

Choosing to eat food or use products that are made with sugar or with sugar alcohol is your decision. Some people prefer the taste of sugar and the crispness and brownness of it when used in baking. Others, either because they are diabetic or just want to reduce the amount of sugar they eat or drink, will choose sugar alcohols. There isn’t one answer for everyone. But with this information, you can make an informed decision.

From an early age, Sharon was encouraged to participate in competitive sports including soccer, basketball, track, softball, and volleyball. She has been an athlete and fitness enthusiast ever since. She explains that her parents instilled in her a level of self-confidence that has touched everything she does. See my profile page for more information!