It seems there has been a sort of watershed in the past few years with respect to pulling back the curtain on our modern food supply. There has been a barrage of documentaries all looking to put a spotlight on various aspects of our food industry. Have you ever thought about where the meat in your cheeseburger comes from? How about the tomato in your salad? Your granola bar? Your water? If asked these questions a few years ago, I would only be able to tell you the restaurant or grocery store where it was purchased. Any further than that, I had no clue and to be honest, never really thought about it. I assumed, like most, that if it was in the restaurant or grocery store, that was certified enough for me. After all, weren’t there people who watched food safety guidelines? Some type of governing body that made sure that all the food and water coming into our various food establishments was the most nutritious “Grade-A” food available, right?

Well, the answer is not a simple one and I am certainly not qualified to answer it. But what I can say is that the rabbit hole is much deeper than I could have imagined. And to those men and women who put in countless hours of work to bring us this information, I want to say that I am humbled by your persistence and I thank you dearly. Below are the top 10 must see documentaries on food and nutrition that I highly recommend watching.

SUPERSIZE ME (2003)
I mention this documentary first because it was one of the first critically acclaimed documentaries to shed light on the fast food industry. Director Morgan Spurlock investigates not only what a diet based on fast food does to the human body but how the multi-billion dollar fast food industry markets its products to the public. And this marketing is often specifically designed to target our children.

BIGGER, FASTER, STRONGER (2008)
This documentary goes in-depth to explore the lengths to which modern-day athletes will go in an effort to win. Particularly, the use and abuse of performance enhancing drugs. The director does a fantastic job of showing how our obsession with getting bigger, faster and stronger is really a by-product of our culture’s obsession with winning, by any means necessary. 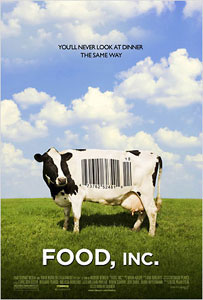 This is perhaps the mother of all documentaries covering the modern-day food industry. Filmmaker Robert Kenner exposes the dark underbelly of the food industry by uncovering the “cozy” relationship between big business and the food industry’s governing bodies. Its premise is based on a simple question: where does the food we purchase in the grocery store actually come from? As I stated in my opening, before seeing this documentary, I had never really given that question much thought. Suffice it to say that “where I was blind, now I see”.

FAT, SICK AND NEARLY DEAD (2010)
If I had to pick a favorite on this list, this is it. Not necessarily for the information it conveys but for the incredibly touching and inspiring story it tells. There are plenty of films, articles and investigative reports on obesity, showing every somber statistic of this epidemic. But what of the “human” part of the story? This film tells 2 of those stories.

INGREDIENTS (2009)
What can we learn by comparing the current industrialized food system with the grass-roots local growth movement? This film aims to answer much of that question and it begins at the source. Local farmers. It’s a fascinating look at the life of the local farmer set against the backdrop of this established industrialized food network. Set in Oregon, the film also shows how local restaurants and grocery stores are supporting this local growth movement with surprising results.

TAPPED (2009)
Before you twist off another cap of bottled water, you owe it to yourself to watch this expose on the business of bottling H2O. Following suit with the recent food documentaries, this film follows the trail of the bottled water supply, both before it gets to you and after you dispose of the bottle. An absolute must see.

THE FUTURE OF FOOD (2004)
This film investigates a very controversial topic: the increasingly common use of biotechnology in the production of agriculture. Biotechnology and genetically modified food (GMO’s) are not the stuff of science fiction. They are not only a reality but chances are you may have some in your refrigerator right now.

FOOD MATTERS (2008)
“Good health makes a lot of sense but it doesn’t make a lot of dollars”. This is the opening line of Food Matters. Obesity it seems is only one of endless ramifications of our industrialized food system. Doctors, scientists, naturopaths and nutritionists all weigh in to show the devastating effects of what we consume not only as “food” but as “medicine”. And of more importance, the types of changes we can make to improve not only our personal health but also to effect change on a systemic level.

WHAT’S ON YOUR PLATE (2009)
This is an especially good one to watch with your children as it follows two 11-year-old kids as they investigate and interview those involved in our modern food supply. From farmers to politics to school officials, these kids ask questions and inspire me as a parent to GET OUR CHILDREN INVOLVED!

KING CORN (2007)
This documentary is as entertaining as it is sobering. Two friends move to the Midwest to plant an acre of corn and then follow their crop through the farming process and its journey into the American food supply. Along the way they uncover powerful lessons on modern farming, the use of genetically modified seeds, pesticides and the role our government plays in the production and distribution of America’s most grown and subsidized grain. You will be astonished to see the staggering amount of products that are made from this one ingredient.

This surely isn’t meant to be a complete list all the great food documentaries out there. There are definitely a few honorable mentions that were hard to leave out and there are also many I have not yet seen. The important thing, in my mind, is that we take a little time to educate ourselves on how and why certain foods make it onto our plate. And most importantly, to educate our children on exactly what it is they are putting into their bodies every day. We owe it to them.