You are at:Home»Diet and Nutrition»Vitamin D Facts – Sunshine Vitamin Helps with Many Ailments

Vitamin D, the “sunshine vitamin,” has recently become a hot topic. It was once thought to be a fairly well understood vitamin without too many surprises. Most experts felt that it was important for bones and growth and not much else. Recent research, however, suggests that it might play a role in preventing or treating a long list of ailments. Diabetes, heart disease, high blood pressure, multiple sclerosis, cancer and chronic muscular and skeletal pain are just some of the conditions that are being studied to find out if they can be cured or improved by vitamin D. But even more surprising than this long list of diseases which may be helped by vitamin D, is the fact that many of us seem to be deficient in this vitamin.

This deficiency is puzzling, as it was assumed until recently, that most people in developed countries were getting adequate amounts of Vitamin D. After all, our main source of vitamin D is sunlight, and most of us have easy access to the sun. And, in addition to sunlight, we have vitamin D fortified foods such as milk, some cereals, soy drinks and breakfast bars. So, why are so many of us deficient in vitamin D? And, furthermore, what can we do about it?

To answer these questions, let’s first review how our bodies process and use vitamin D. Vitamin D can either be eaten, or made from a “pre-vitamin D” when the sun’s ultraviolet rays hit our skin. It then goes through a multi-step process, in which it is converted from a less active form to a more active form. Once it is in the most active form, it acts like a hormone and helps the bones to take in more calcium and become stronger, and, also acts on the intestines and causes them to absorb more calcium into the bloodstream. 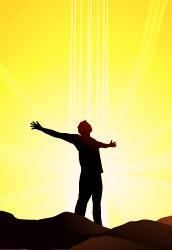 The process of converting “pre-vitamin D” to the more active form can break down at any of its several stages, but, for many of us, there appears to be a problem during the sunlight phase. The time of exposure to sun, the angle of the sun, a person’s age, percent body fat and skin pigment all affect this stage of vitamin D production. Ten to fifteen minutes of direct sunlight exposure, twice weekly, is needed to produce an adequate amount of vitamin D, and, although this seems easy to achieve, it is easier said than done. To get the best exposure to sunlight, it is necessary to be in the sun during the summer season at midday when it is high in the sky. It is also advantageous to live within 25 degrees north or south of the Equator where the sun’s rays are more direct. The less direct the sun’s rays, the less vitamin D we make. A study of vitamin D blood levels of people living in Boston (42.2 degrees north of the equator,) showed that during the winter months when the sun is at a more slanted angle, no vitamin D was made. Other studies of other areas more than 25 degrees above or below the equator showed the synthesis of vitamin D to be less during the winter months, and the farther away from the equator, the smaller the amount of vitamin D that was made.

Sunscreen and clothing can also block UV light and decrease vitamin D production. Most people living in a temperate climate, such as in the United States, keep their skin well-covered with clothing, especially during cold weather, and they use sunscreen liberally when they actually do venture into the sun. Darker skin color, higher body fat and age also slow down or block UV light’s effect on vitamin D synthesis. All of these factors can lead to low blood levels of vitamin D and increase our need to get more vitamin D from our diet.

This is a problem, since vitamin D is almost absent from our food supply. About the only foods which naturally contain vitamin D are some fatty fish and a few varieties of mushrooms. Furthermore, there are restrictions on the amount of vitamin D which can be used to fortify foods, making it difficult to get what we need through fortification. So if we cannot get enough vitamin D from foods or from sunlight, then that leaves only one other solution to getting enough of this vitamin-supplementation.

Many nutritionists and doctors have been slow to push supplementation since there is some confusion about how much and what form of vitamin D should be recommended. The current recommendations based on the adequate intake (AI) amounts are: 200 IU per day from infancy to 50 years of age, 400 IU per day from age 50 to 70, and 600 IU per day for people over 70 years old. These amounts do not appear to be enough, however. A person is considered to be getting enough vitamin D when the amount of active vitamin D in the bloodstream equals 75 nmol/L, and this does not always happen when these amounts of vitamin D are consumed. Many nutrition experts feel that our current guidelines are not high enough. Some have suggested that even the very young should be getting 500 IU per day, and that the elderly should be taking 1000 IU per day. Some researchers feel people with darker skin pigmentation should get 2000 IU per day. Others have suggested that everyone, regardless of age, needs at least 1000 IU per day. 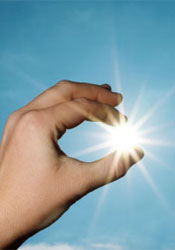 To further confuse the issue, there are 2 forms of vitamin D that are supplemented: cholecalciferol (vitamin D 3) and ergocalciferol (vitamin D 2). Vitamin D 3 is the natural form, the same type that is made in your skin. Vitamin D 2 is made in plankton under natural conditions. It has about half the strength of vitamin D 3, and interestingly enough, has been shown to be more toxic when it is overdosed. Both vitamin D 3 and vitamin D 2 overdoses, however, are rare. At one time, there was some concern that too much vitamin D could be toxic, but recent research has shown that 10,000 IU per day can be taken without any toxic effects.

So we are left with some unanswered questions about this vitamin. We are not sure of how much or what form should be supplemented. Furthermore, we are not completely sure what benefits we would receive if we did take in more vitamin D. The best advice that can be offered at this time is that if you suspect that you are not getting enough vitamin D; get your blood level tested. If the test shows you are deficient, then take whatever amount of vitamin you need to get it to an adequate level. Although testing blood levels and taking a prescribed amount of vitamin D, would involve some expense and the cooperation of your doctor, this would be the best way of making sure you are getting enough of this vitamin. It is possible to dose yourself with over-the-counter vitamin D supplements without testing your blood levels, and it would most likely not be harmful to do this, as long as you did not take more than 10,000 IU per day. Testing and then dosing, however, is a more accurate way.

There is an urgent need to find some answers to our questions about vitamin D since supplementation is, for many people, the only way they can reap the benefits of this vitamin. Hopefully we will get more information as more research is done, and we will be able to start preventing and treating some of the diseases mentioned earlier in this article. After all, vitamin D supplementation would surely be a simple way to treat a lot of chronic diseases that have stumped us for many years.

Lillie Larsen is a clinical dietitian and has worked in a variety of situations and capacities including: renal, diabetes, stroke team, long-term care and general nutrition. She is currently specializing in Diabetes Education and related health conditions. See my profile page for more information!