You are at:Home»Diet and Nutrition»Weight Loss Perspectives – Balancing Calories for Weight Loss

I’ve run the gamut when it comes to weight loss theories. I’ve believed, researched and practiced almost every diet imaginable and even made up a few of my own. Have you ever tried eating Oat Bran for breakfast and lunch and then having a sensible dinner?

After playing the run around for 15 years, I came back full circle and realized that my old nutrition professor had it right all along. It really does all boil down to calories in versus calories out. That being said, I’ve learned a few new angles on the practice of calorie balance that I really wish I knew years ago. So without further ado, here they are:

#1: Food Isn’t Calories
I used to think that we humans run off of fat, protein and carbohydrates (alcohol too, but some people classify that as a sugar and thus a carbohydrate). I also used to believe that there was a difference between fat calories and protein calories.

Now I think differently. Not that all foods are the same, they aren’t, but that all calories are the same because the food itself isn’t the calories. The energy we humans use to live off doesn’t actually come from food. It comes from the sun. Plants take the energy from the sun and use it to create a bond between a hydrogen and carbon atom. We then consume the plant. Or, animals can consume the plant and then we consume the animal. Whether we eat fat, protein or carbohydrate, it’s the bond between the carbon and hydrogen atom that has the energy we use. That bond is where our calories come from. We use the energy by breaking that bond and then combining the hydrogen and carbon with oxygen to be expelled as carbon dioxide and water.

So in other words, food contains the energy between those two atoms, but the energy is in the bond, not in the food itself. In this way, food isn’t the actual energy or calories, but rather more like the battery that holds the energy.

#2: There’s No Such Thing as a Negative Calorie Balance
The body can’t use energy it doesn’t have access to. You can’t burn more than you consume, it’s physically impossible. The only difference is where it can get those calories from. If your calories aren’t coming from food, they must come from your body in some way, shape or form. So, calories burned always is the same as calories eaten plus or minus calories from the body. 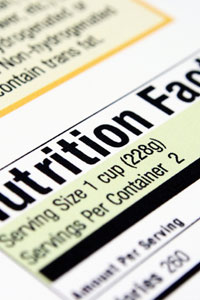 If the energy you need isn’t coming from your diet, your own body is the only source of fuel you can use. If you’re using fuel from your body,you simply must lose weight. Our body is just like any other food source. It contains fat, protein and carbohydrates. The interesting thing is that if you’re using your body for fuel you have to become lighter.

Ideally, you want to use fat for the fuel but we are also going to use protein and carbohydrate to at least some degree depending on diet, and activity factors. In either case, using protein or carbohydrate for fuel also results in a drop in weight. In fact, it can result in a faster drop in weight.

#4: Don’t Worry Too Much About Slowing Down Your Metabolism
It’s true that muscle influences your metabolic rate, but the lions share of factors controlling your metabolism are things you can’t really control. These include your age, somatotype, genetics, height, and gender. It’s also true that fat-free mass is a major factor in your metabolism, but keep in mind that the muscle on your body is only a part of your total fat-free mass.

So muscle is only a piece, of a piece, of a piece of the metabolic puzzle. That doesn’t mean it’s not important, but it does mean that your metabolism isn’t going to change much if you shed a few pounds of muscle here and there. It would take massive gains or losses in muscle mass to make much of a difference.

#5: Your Energy Level is Far More Important Than Your Metabolism
I honestly couldn’t care less about my metabolism. Unless I have a glandular issue, I’m not going to worry about it. That being said, your energy level is a massive influence to your calorie balance. When your energy level is high, your appetite is low and you’re naturally more active. When it’s low you just want to sit around and order take out. This is why it’s so important to pay attention to influences on your energy levels. This can include diet (what and how much you eat), sleep patterns, attitude and positive influences like things that make you happy.

Calorie counting is crazy hard to do accurately. It requires carefully weighing and measuring everything you eat. It also requires taking every single motion you put your body through into account. Trying to count calories through reading a few food labels and going off of the calorie readout on a treadmill is akin to trying to read a book from across the room. Of course, you can make your numbers more accurate but it takes much more work and discipline.

The good news is that you don’t have to count calories in the long-term for success. Remember, your body will lose weight if you’re burning more calories than you’re eating. Your body weight and size is a much more accurate measure of calorie balance than any device or log.

#7: We Survived By Burning Fat and Building Muscle, Not The Other Way Around
Lastly, I question this idea that we humans have evolved to hold onto fat and shed muscle like it’s worthless caloric baggage. I contend that muscle is more important than fat for human survival. We needed muscle to move, travel, hunt, fight, flee, build shelter, and navigate the world safely. According to evolutionary theory, only the strong survive.

Besides, what good is having fat if we can’t burn it for fuel? Having trouble burning fat, but ditching muscle during tough times would be like losing your income and selling the house to live on the streets in order to preserve the boatload of money you have in your savings account.

I contend that our struggle to build and hold onto muscle, but our ease of building fat, is a product of our modern society and built up habits rather than evolution. We don’t need much strength and muscle in the modern world and our 1-2 workouts a week are a smidgen of the muscle building activity our ancestors experienced. In addition we are surrounded by convenience and opportunity to eat a lot, move very little and keep our energy levels in the dumps. Holding onto fat and keeping muscle off of our frame is both only possible and survivable (to some degree) due to our modern society. Our ancestors wouldn’t have stood a chance if they had the genetics to be fat and weak.

In conclusion, the age-old idea that it all boils down to calorie balance may seem outdated and too simple. However, I believe that calorie balance is one of the least understood aspects of our fitness culture.