The back is a complex structure with multiple muscle groups broken down in multiple ways in order to execute the varying jobs of those particular muscles. In order to best explain this muscle group, we will first look at the big picture and then work our way in.

The back muscles are broken down into three separate groups; the deep, intermediate, and superficial groups. Deep muscles are muscles that are developed in the back and usually deal with the vertebrae, extending from the sacrum all the way up to the skull vertically.

Exercise Guides For Your Back!

There are a few common words used in the anatomy of the back muscles. The first group of words deals with the location of the muscles of the back and what they are used for. Superficial, or extrinsic muscles, refer to those that are located near the surface, so these are the muscles that get bigger as you lift weights. Opposed to the deep, or intrinsic, muscles of the body, which tend to develop under many layers of fascia and are embryonically related. The intermediate muscles are, as you can imagine, are located in between the superficial and deep muscles.

Now that we understand the basic anatomic definitions, we can zone in on the back and separate the muscles using the terms above. The extrinsic (superficial) muscles of the back deal with movements of the shoulders and upper limbs. 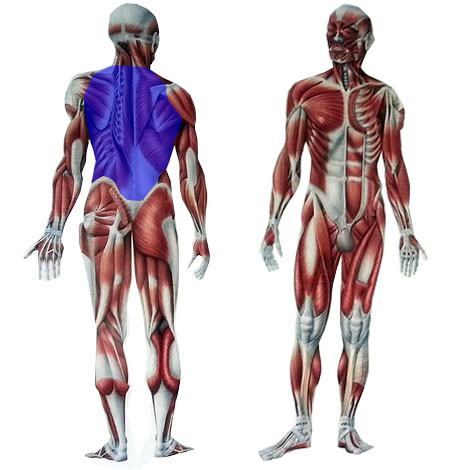 Trapezius
These are large triangular muscles on either side of the vertebrae with a point of attachment near the skull, elongating down towards the middle of the spine and reaching a third point near the shoulder. The two muscles on either side of the vertebrae form a trapezoid, hence the muscle’s name. This muscle also covers a large portion of the back’s surface area and is the most superficial of all back muscles. The trapezius muscle’s main function is the elevate and retract the scapula (shoulder blade) and give support to the arm.

Latissimus Dorsi
Located in the middle of the back and partially covered by the trapezius, is the latissimus dorsi, which is most notably referred to as the “lats”. This is the largest muscle of the back, lying flat and wrapping around the sides of the body from the armpit (attaching at the humerus) down to the bottom of the rib cage. Its main functions deal with the adduction or extension of the arm including swinging, rowing, and pulling.

Rhomboids
Also covered by the trapezius, are the rhomboids. These are two muscles (major and minor) that attach to the scapula, keeping it in place and rotating or retracting when necessary. The rhomboid minor is thinner and lies above the rhomboid major.

Levator Scapulae
Located above the rhomboids is the levator scapulae. This muscle is a small strap that attaches at the neck and the top of the scapula, with its main function centered around lifting the scapula. 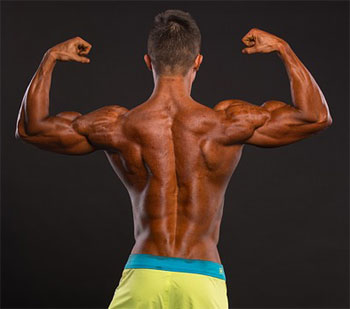 Below the intermediate muscles lie the deep, intrinsic muscles. These muscles are all covered by the other layers of muscle and fascia.

Erector Spinae
These are three long, vertically situated muscles that together form the erector spinae. This is the largest group of muscles in the back and are located on either side of the vertebrae from medial to lateral. Located closest to the vertebrae (medial) is the spinalis, followed by the longissimus (the longest of the three muscles) and finally the iliocostalis as the most lateral. The function of the erector spinae is to straighten and rotate the back.

Transversospinalis
Lying underneath the erector spinae are the transversospinalis, which connect the traverse process to the spinous process of the vertebrae. Basically, this traverse process of the vertebrae is where muscles and ligaments connect to the vertebrae and the spinous process is a connection point dealing with the well protected spinal cord. There are three groups, listed in order from superficial to deep as semispinalis, multifidus and rotares.

Spinotransversales
This is a group of two muscles, the splenius capitis (larger muscle) and the splenius cervicis (smaller muscle). This muscle group is responsible for movements of the head and neck. They can act together to contract or extend the head back and forward, or while working individually, they rotate the head left or right.