The biceps brachii, or biceps for short, is a superficial skeletal muscle located on the front of the upper arm. It’s composed of a thick mass that includes two “heads”, the long head and the short head. Each head is connected to the shoulder joint with an individual tendon for each one called the proximal tendons. Both heads are attached to the radius bone located in the forearm via a single thick tendon called the distal tendon. Each head originates from a different portion of the shoulder joint. The short head is attached specifically to the coracoid process in the superior anterior area of the scapula. In the case of the long head, it originates from the supraglenoid tubercle just bellow the coracoid process.

Exercise Guides For Your Biceps!

When it comes down to the actions or “functions” of this muscle group, the biceps brachii has two main roles, elbow flexion and forearm supination. Contrary to popular belief, the primary function of this muscle is to supinate the forearm. In other words, to move the arm from a pronated (palms facing down) or semi-pronated “neutral” position to a supinated position (palms facing up). This action can be seen frequently and some examples are when you try to open a door with your key or when turning on your car. The other action the biceps perform is elbow flexion, which is basically moving the arm from a extended position to a bent position. In both cases, the biceps contract (shortens) but, depending of the movement, one head of the bicep can contribute more than the other. In the case of elbow flexion, when the arm is pronated (palms facing down) the long head does more of the work. The same case applies when movement is being performed with a neutral or semi-pronated hand position. In the case of elbow flexion when the arm in fully supinated, the short head is able to contribute more to the movement. When referring to forearm supination, the long head is at a stronger position at the beginning of the movement, then when the palm reaches a neutral position and continues to rotate to full supination, the short head helps to finish the movement. Finally, it’s important to make clear the fact that both heads of the biceps brachii contribute to all of the movements this muscle is able to perform, but as explained prior, one of the heads can take more of the work at some point of the movement than the other. 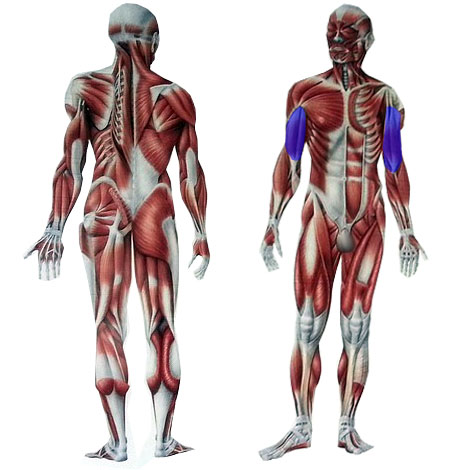 Another important aspect when referring to the biceps is how to train them when you’re in the gym. There are a variety of exercises that can contribute to the development of this muscle. One thing to keep in mind when training biceps is the fact that some exercises target one head better than the other.

In this sense, most compound exercises that involve pulling (back exercises) will target the biceps to some extent. In this case, we will be referring to isolation exercises which primarily focus on the biceps alone. The first exercise that comes to mind when talking about bicep training is the bicep curl (dumbbell or barbell). It’s important to mention the fact that depending on how this exercise is performed it’s possible to target more than one head of the biceps. This can be executed in several different ways with the most important being your hand position. Curling with a pronated grip (palms facing down), like in a reverse curl, will target more of the long head. When talking about long head development, even though the reverse curl is good for that, the best option is the hammer curl, which is performed with a neutral or semi-pronated grip. Finally, if you want to focus more on the short head, curling with a completely supinated grip (palms facing up) it’s the best way to target this area.

Lastly, when doing bicep curls, a variety of options are available including dumbbells, barbells and cable machines. To achieve the best overload on the biceps, curling with a barbell is the best option because you are able to use the largest amount of weight. Cable machines give you constant tension throughout the entire range of motion and dumbbells help you train each arm independently which helps you avoid or fix muscle imbalances (one side being bigger or stronger that the other). It’s always best to mix in a variety of different training styles that incorporate different types of equipment (dumbbells, barbells, cables) along with bodyweight movements like chin ups which are excellent for building your biceps!