The chest, or thoracic region of the body, serves multiple functions. It contains many of our internal organs that rely on involuntary movement connected to our nervous systems, such as the heart, lungs and thymus gland. The chest also contains muscles that connect to our neck and arms in order to perform pushing and pulling movements. We will mainly focus on the muscular structure of the chest from front to the back, as well as its function and relationship to each connection.

Exercise Guides For Your Chest!

The Pectoral Muscle Group
Let’s start with the most well-known muscle among the rest of the muscle groups in the chest region, the pectoralis major muscle, also known as the “pecs”. The pectoralis major covers the front upper chest and contains cartilage that connects to the collarbone. Its other main connection is the upper arm, right under the deltoid muscle of the shoulder. Its purpose is to move the arm across the body.

The pectoralis major is composed of three main parts, first of which is smaller compared to the other two heads, but is considered just as important when it comes to muscle function. The clavicular head rises from the clavicle and attaches below the shoulder. Its main role is to assist in the flexion and rotation of the humerus (the upper arm bone). The second of the three main parts is the largest of the three muscle groups, and also serves to assist in the movement of the humerus. The sternocostal head has a starting point from the sternum and connects to the humerus in order to create the possibility of the movement of the arm toward the middle of the body. The last of the pectoral heads is the abdominal head of the pectoralis major. It serves as a connective tissue that surrounds the abdominal muscles and attaches to the humerus. 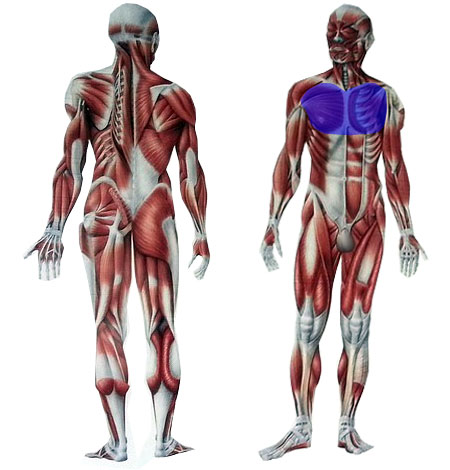 The pectoralis minor muscles are a thin muscle group that is situated below the pectoralis major and above the rib cage. They are connected to both the shoulder blades and serves as a counterbalance for the trapezius muscles by serving to move the shoulder both down and forward.

Muscles Around The Rib Cage
Underneath the rib cage lies 22 pairs of intercostal muscles. These muscles are separated into two sections of 11 muscles and connect to each rib bone above and below. These important muscles play a role in the movement of the chest when breathing and serve to protect the lungs.

Outside of the rib cage, closer to the back and on the sides of the chest is the serratus anterior muscle. It is connected to the shoulder blade and is used to pull the shoulder blade down and to the front for pushing motions. It should be noted that although the serratus anterior muscle is not technically located in the chest, it is considered to be part of the overall chest muscle group because it attaches near the pectorals on the ribs.