You are at:Home»Exercise Guides»Trapezius Exercises | Photos and Instructional Guides for Traps

Exercise Guides For Your Trapezius!

The trapezius muscles consist of three areas and these include the upper zone, middle zone and the lower zone.The upper zone is also known as the superior fibers and it extends from the base of the skull and down to the lower thoracic spine. It covers the posterior and the lateral sides of the neck to the shoulder. It inserts into the clavicle and acromion of the scapula elevating the scapula. The middle zone can be divided into two sections which include the upper middle and the lower middle. They both originate from the thoracic vertebrae joining into the acromion and scapula. The lower zone is also known as the inferior fiber and it originates from the thoracic vertebrae and connects to the spine and the shoulder blade. The two trapezius form a diamond-shaped trapezoid, hence the name of the muscle group being called the “trapezius”. 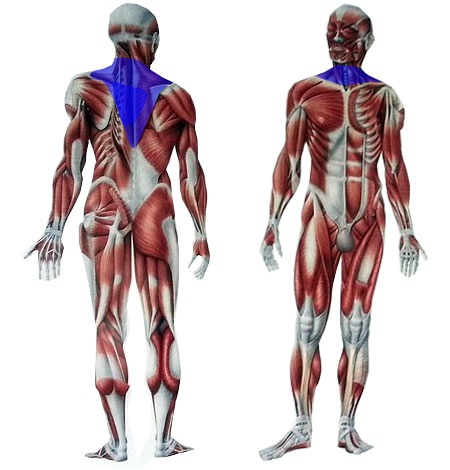 It is possible to feel the trapezius muscles contract when lifting weights and this should be the goal when performing exercises like barbell and dumbbell shrugs. You can try to stretch the arm in front of your body and use your other hand feel the area between the neck and shoulder to really get a good sense of which muscles are being engaged. The upper region of the trapezius muscle is developed with exercises like the hang clean. The middle region can be developed by pulling the scapula together and the lower region can be developed by drawing the shoulder blades downward ensuring that you keep the arms straight.