You are at:Home»Exercise»3 Ways To Burn More Calories – Tips To Help You Lose Weight

The first thing we have to do is take out the trash. The fitness world is filled with lots of different exercise methods, each one touting that its method is the single best way to shed fat. Each method has lots of testimonials and science to back up their claims. Unfortunately, each method also has lots of people who have used that method without any success whatsoever and there is also a lot of science to argue that the method doesn’t stand a snowball’s chance in hell at helping anyone shed fat.

Some people might say that different programs work for different people but I’ve never really bought into that whole idea. On the whole, we all have the same basic human physiology which functions about the same. We all put on our pants one leg at a time and we all lose fat for the same reason.

My argument is that the exercise method you select has just as much of chance at helping you lose weight as any other. It’s not that one method is better than another; it’s that they all roughly do the same thing, which is make the body utilize more energy.

At the heart of all weight loss, we have the issue of storing too much energy in the form of fat within out adipose tissue. To get rid of it, we must make use of that energy in some shape or form. The good news is that you can use that stored energy for anything from playing with the kids to Jell-O wrestling. The body uses fat, to at least some degree, for darn near anything you do.

With this is mind, we can throw away all of the hype and hoopla about what exercises are best, and simply concentrate on how we can use up the most energy possible. The more energy you use, the more you stand to burn. All forms of exercise can help you dump loads of energy-laden fat. At the same time, they can also all hardly make a dent. It all boils down to 3 variables. 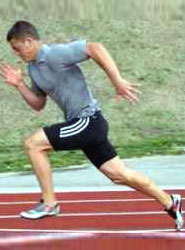 It’s pretty simple math. You burn more energy walking for 20 minutes than you do for 10. You’ll also burn more walking for 30 minutes instead of 20. The more time you spend doing a given activity, the more you burn.

Fat Blasting Variable #2 – Intensity of Exercise
If you’re walking along and suddenly the hill becomes steeper, you will burn more energy with each step simply because you have to work harder. Adding a few more pounds to the bar, increasing the pace or turning up the resistance will do the same.

Fat Blasting Variable #3 – Muscle Mass Involvement
Simply put, the more muscle you involve in a given activity, the more energy you require. Sitting still and flexing your hand uses small muscles that don’t require a whole lot of energy. However a few burpees that involve almost every muscle in your whole body will use substantially more.

Those are the only 3 things I’ve discovered that you can change to affect how much fat you are actively burning off with exercise. These variables can be applied to any form of exercise you wish. This means that any exercise can be fantastically effective, or almost completely useless.

Of course it goes without saying that some forms of exercise would probably hedge your bets better than others. If you just want to dump as much energy possible, I would recommend a very long and very intense form of activity that uses as much muscle as possible.  A 7-hour cross-country ski race comes to mind. At the opposite spectrum would be something like twirling a pencil through our fingers for 30 seconds.

With these three variables in mind, we can see how some exercises have their pros and cons. Running is good because it can be done for a while and can be pretty intense. Walking can be done for even longer, but the intensity is not quite as high. Strength training can be super intense but it doesn’t typically happen for more than 20-30 seconds at a time.

It is also worth noting that the time and intensity variables run in opposition to each other. The more intense an exercise is, the less time you can do it before fatigue forces you to slow down. This is partially why it’s so difficult to burn a lot of energy very quickly. Both of these variables keep the other in check forcing the time variable to always be what I call the master variable. No matter what you do, it’s going to take a considerable amount of time to use up a considerable amount of energy.

The point is that energy burned is energy burned, and that there is no such thing as exercise that “makes you thin”. If it burns energy, it will help you lose weight and the more energy you burn off the more it will help contribute.

Don’t get sucked into the trap of thinking about fat burning zones, carbohydrate metabolism versus fat metabolism, or energy burned through the “after burn” after an exercise. These sorts of things do little to nothing to make any real difference when it comes to weight loss. They are not worth the effort to consider. By focusing on time, intensity and muscle involvement, you will have everything you need to maximize your fat loss efforts through exercise.