You are at:Home»Exercise»6 Great Ab Exercises – Get Ripped Abs with Your Body Weight

Some people get hot under the collar listening to political debate. For others, its religious or philosophical commentary. My personal hot button is the TV infomercials that are selling some sort of six pack abs device. After watching an abdominal machine infomercial for just a few minutes, I feel like I need to go out and blow off some serious steam.

It’s not that the claims are over hyped (which they are) or that the sales pitches are so sleazy. No, what really burns my bacon is the fact that their “Abs Wizard 3000” is completely unnecessary and is often less effective than conventional bodyweight core training. While one option has you shelling out hard-earned cash for a sub-par machine, the other is top shelf and costs you almost nothing. Plus you don’t have to wait for shipping. You can get started right after you read this! I firmly believe that no device or machine will offer the same quality workout as the following exercises.

The reasons for this are:

So while the infomercial host with the Colgate smile tries to convince me I can’t be lean and trim without their device, I just head out and do the following exercises instead.

Bodyweight Abs Exercise #1 – Rebel Planks
Conventional planks are done with the spine in a straight line in either a push up position or with the elbows on the ground. That move alone is far superior to anything you can buy for 3 easy payments of $19.95 but I use a slight tilt in my hips to take the exercise to another level. 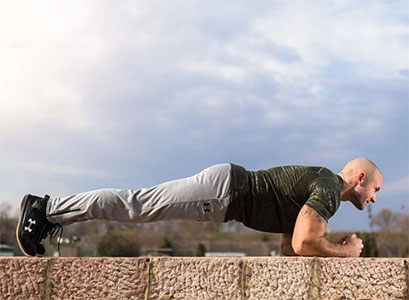 While in the plank position, simply tilt your pelvis slightly so you are crunching your abs. It should look like you’re rounding your lower back while tucking your hips upwards and in towards your belly button.

It’s a lot easier to get the motion down while standing. Simply stand upright and tuck your hips up and slightly forward. It might look a little like you’re practicing for a role on Dirty Dancing, but that slight tilt will ignite your abdominals on fire and release some pressure off your lower back at the same time.

Bodyweight Abs Exercise #2 – Spider Planks
Spider planks are a fun variation where you spread your hands and feet apart so you kind of look like a spider all spread out.

From that position, you lift up one limb at a time while keeping your shoulders and hips perfectly still. You’ll notice that as soon as you lift up a hand or foot, your entire core needs to quickly and very powerfully contract to keep your torso still. Simply lift one limb at a time for a few seconds and then put it down before going to the next one.

The difficulty of this move is really easy to adjust. The more spread out your limbs are, the more your core will have to work. So bring everything in closer or further apart to adjust the intensity.

Bodyweight Abs Exercise #3 – Side Planks
Side planks are always harder than they look. Just like regular planks, you are holding your hips up off the ground. Only this time you are on your side and only one arm and one leg are in contact with the mat. Be sure to keep your whole body strait and don’t let your hips stick out behind causing your body to form a sideways V.

You can really take this move to the next level by lifting your other leg above the one on the ground kind of like you’re doing a jumping jack on the side. 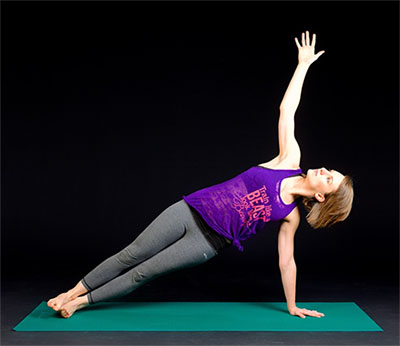 Bodyweight Abs Exercise #4 – Leg Raises from Dip Bar
A lot of folks talk about the core muscles, but sometimes we just want to focus on the abs. If that’s the case, there are few exercises as effective and simple as leg raises. You simply let your legs hang down below and lift them up.

While you can do this move in a variety of ways, I highly recommend doing them on a dip stand or gymnastics rings. By holding yourself up by pressing down into the handles, you will greatly improve the quality of the technique and the exercise as a whole. Plus, you can get in some extra isometric work for your entire upper body as a bonus.

Adjusting the intensity of this move is really simple. You just straighten or bend your knees to make your lever (legs) longer or shorter. Doing this move with locked out straight legs is far more challenging than any abdominal machine.

Bodyweight Abs Exercise #5 – Bridges
When talking about the core we can’t forget about the backside of the body. You could have abs of steel but they won’t do you much good if your back side isn’t strong and flexible.

You could do loads of different exercises to strengthen the back and many more to keep it subtle, but you don’t need to. The simple bridge will both strengthen and stretch all of the important muscle groups along your spine.

The best bridge to start off with is to lie on your back with your feet flat on the floor about shoulder width apart. From there, you press your hips up towards the sky as far as you can go. You’re goal is not to bring your body strait but to actually slightly arch your whole body. It’s a simple move, but it can help keep the chiropractor away for years to come. 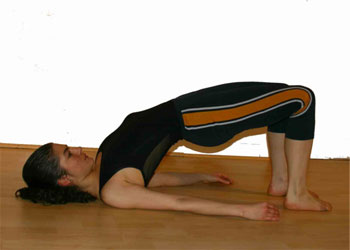 Bodyweight Abs Exercise #6 – Kicking and Punching
You don’t have to be a black belt to reap the massive core benefits of kicking and punching. All of the twisting, bending and stopping used with kickboxing uses the entire core in a very organic and functional way. Plus it’s fun to let out the kickboxer within once in a while. So take up a kickboxing class or rent a few DVDs. Before you know it, you’ll be having the time of your life fighting off imaginary bad guys rather than counting endless reps on a cheap plastic device.