You are at:Home»Exercise»A Higher Power – How Your Strength Can Impact People’s Lives

I have a personal story to share with everyone about an experience I had around 2 years ago. One day my girlfriend and I thought we would go to a local park about 20 minutes away, which we had been to only one other time, to have a picnic. It was a nice warm day with clear skies. On our way there, we thought it would be fun to go to the same place in the park as we did before. The park is very large with many areas to picnic which are all surrounded by a big lake.

We pulled into the park and noticed that there was hardly anyone there that day. We drove around the lake to the north end where we had went before and there was nobody at the picnic area. Just as we started to get out of our vehicle, someone pulled up behind us. I was disappointed because we looked forward to going back to the same area we had been to before. We then decided to drive and look for a different spot to picnic so that we would have some privacy. We drove about 1/2 mile down the west side of the lake and noticed a spot. I almost kept driving but then turned and pulled in.

We got out and sat down at a picnic bench and started enjoying the beautiful day. I noticed two boats out on the lake. Other than that, there was very little traffic. It felt like we were the only people there that day.

We could not have been there more than 2 or 3 minutes when I heard a noise. I could not make it out until we stopped talking. Then I was able to realize it was someone crying. I looked and saw a young girl about 20 yards directly across from where we were sitting standing facing away from the lake in a wooded area sobbing. She was in my direct path of vision. Many things ran through my mind. Was she lost, had she been abducted and let go, was someone playing a prank on her or maybe she had fallen down. I stood up and saw nobody else around. As I approached her, I saw that she had a life jacket on. It was then that everything clicked. I looked down the bank to the lake which was about 25 yards away and saw a boat floating upside down on the water along with 2 life jackets past the dock about 10 or 15 yards away. I ran down the bank reaching for my cell phone only to realize I had left it in my vehicle. As I approached the dock I could not see anyone or hear anything and my mind was racing as I don’t know how to swim but I was going to try to help. 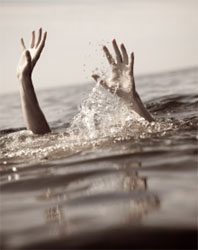 As I got to the edge of the dock which went out about 20 yards or so on the lake, I stood there looking for some kind of movement or noise but there was nothing. It was a very ominous feeling. Then I saw a hand just inches above the water moving, so I dropped to my knees on the very edge of the dock and was able to grab the wrist and pull the person’s head above water to avoid them from drowning. It was a man who was gasping and choking. The water level was about 2 feet below the dock. I told the man as he looked up at me with fear in his eyes that I would not let him go. Then another arm came above the surface and I grabbed that one with my other hand. I was almost pulled in by the weight of holding on to both of them and my knees were hurting. In my mind, I thought I would drown also if they pulled me in. Just then, my girlfriend was next to me on the dock. She helped me lift the woman out of the water while I held onto the man’s wrist. I then lifted the man up on to the dock. They both laid there gasping on the dock. Once they were able to speak, the man said, “Thank you! Thank you for saving our lives”. As soon as he said that, I knew what I needed to say. I told him he should thank God because we were not going to be at that part of the lake that day. We had planned on being at the north end which was a 1/2 mile away. I also told him we just sat down a few minutes before I noticed the little girl. This could not be a coincidence.

After the incident, we spoke and helped calm the little girl down. He told me what had happened. Their grandparents had taken their granddaughter for the day. They were going to all get out of the boat at the dock. After the girl got out, the grandparents went to get out of the boat and lost their balance, tipped the boat trying to get out and it flipped over. Neither of them had life jackets on.

If we had not been there at that time there would have been a tragedy and a little girl scarred for the rest of her life, much more than she was by seeing the accident. With all the trees, nobody driving by could have seen what happened as the road was about 35 yards from the incident and on that day there was hardly anyone at the park. We went for a walk after the incident thinking about what would have happened if we had not been there and both believed we were put there at that time by God to save those people. My girlfriend looked and said, “Your knees are bleeding”. I never looked but I did feel the pain in my knee area while I was holding onto them. I had shorts on and the dock was made of wood which was weathered.

What I find amazing, were several things. We were not going to be at that part of the lake, we arrived at the exact time needed to help and that they were close enough to the dock that I could see them and reach them. All these years of lifting really paid off big that day because I had the strength to grab them, not be pulled in and hold on to them long enough before pulling them out. The depth of the lake where this happened was anywhere between 20 and 30 feet deep, I was told later.