You are at:Home»Exercise»The Art of Hustling – Hustler Tips To Help Achieve Fitness Goals

What’s up everyone? I realize that if you are on this site going through the articles that you probably want success.  That may be success in life, in the weight room or anywhere for that matter.  It has been my experience that muscle heads that train hard and actually are willing to read about it and study it are usually very success-oriented people.  With that in mind, enjoy!

Most people think of hustling as running some kind of scam or being a criminal.  While that can be true, more often than not, some of the most legit hustlers are some of the most successful businessmen of all-time.  Hustlers are men and women that have a plan and they execute it daily.  No moment is wasted because hustlers can’t afford to waste time and spend time on non-essential issues.  A non-essential issue is anything that doesn’t in some way help you get to where you are going.  That means most television watching is out, just existing is out, and meaningless conversations are out!

I learned from Paul Reddick (big time hustler from Jersey who may not be world-famous but he runs with the best of them) that you must incorporate down time into the schedule and it is during that time that you can chill and kick back.  Hustlers are world-changers because they realize it is all a game and they are going to win that game.  By now, you will know if this hits a button deep within you that you are hustler, if not, that’s okay, since 99% of the people out there just exist and are happy being average.

“One of the worst thing to be in the world is average,” –Arnold Schwarzenegger.

Check out some of these hustlers:

50 Cent – His book was great (The 50th Law) and 50 always had a plan.  He knew when he was on the streets in NY what he was going to become.  He knew he didn’t want to live a life of crime and he would become legit.  Everything was thought out and he acted immediately.  He knew if he waited, the moment would be lost forever.

GENE SIMMONS – I am listening to his book for the second time and the dude knows what he is talking about when it comes to success.  He goes as far as saying that if someone is holding you and your talents back, then get rid of them.  He took EVERYTHING and figured out how to leverage it to becoming more successful.  He was always one step ahead.  Simmons says that anything that robs you of your senses is foolish (drugs and alcohol), those things will only slow you down.

FELIX DENNIS –  I just finished his book too.  For those of you that don’t know who Dennis is, he is the guy that founded and created Maxim magazine.  He was a college dropout.  He has gone on to own and operate one of the most successful magazine companies in the world.  He figured it out on the fly.  Before Bruce Lee died, Dennis and a buddy went to Hong-Kong to start writing and autobiography about Lee.  They realized he was a worldwide phenomenon.  Just so happens that Lee died when they were about finished with the book.  Good timing?  Coincidence?  Neither, since hustlers know deep down that Luck is when opportunity meets preparation. 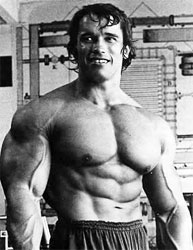 ARNOLD SCHWARZENEGGER – Arnold has been a hero of mine and I am sure many of yours too.   I have read all of Arnold’s books.  Arnold said at a very young age that he was going to be the best bodybuilder of all-time, he was going to go into the movies in America and then he would go into politics in America.  He couldn’t even speak English when he made these claims!  His friends told him he was crazy, we all know how it turned out.  He had a mind of steel, adapting on the fly to any situation.  There is a great story about Arnold when he was featured in Weider’s magazines and Weider told him he wanted a cut of the action that Arnold was getting from a program Arnold was selling in the magazines.  Arnold turned around and billed Weider for the appearances and photos of himself in the magazines.  Weider realized his prized pupil was a hustler and backed off.

AL CAPONE – This guy was a notorious gangster, but he got stuff done!  Felix Dennis said in his book that Capone could have been one of the best businessmen of all time if he chose to focus his efforts on legal business.

So, what can you take from these examples? Make stuff happen! NOW!

I also wanted to include some of my own findings from my research on my body (what better place to experiment and research, right?).  About two months ago, I dropped ten pounds of body fat without changing anything in my diet or training.  You want to know the things I did change?  I started taking in about 15 grams of fish oil per day and the big thing was I made sure I was getting 8 hours of sleep per night.  That’s it!  The energy in my day and workouts was amazing when I went from 6 to 8 hours per night and I got just as much hustling done each day.  A lack of sleep is a stress signal in the body, leading to a burnt out sympathetic nervous system and a rise in cortisol, which is directly related to that spare tire hanging around your waist.  I think back to when I competed in bodybuilding and the main goal of the sport, which was to retain muscle and lose fat come competition time and I was only sleeping 4 ½ to 6 hours per night!  When one of my clients is having trouble losing body fat now, I put sleep right up there at number one after I have checked their nutrition log.  A good, quality 8 or so hours of sleep equals less body fat!