You are at:Home»Exercise»Athletes in Training – Functional vs. Non-Functional Hypertrophy

As a Strength Coach that has competed in bodybuilding, I have a unique perspective on muscular hypertrophy. I have read of so-called “experts” that have recommended bodybuilding style training for athletes that need to gain weight. Let me make this clear, bodybuilding is a sport and the only people who should train in a predominantly bodybuilding oriented style are bodybuilders. In this article, I hope to explain the difference between functional vs. non-functional hypertrophy and shed some light on how we can help our athletes gain useful muscle.

I have been reading up on some of the leading experts in the industry and one common thread has appeared amongst all of them. Strength-speed exercises should make up the bulk of an athlete’s strength program once they have moved past their general physical preparation phase (GPP). You should always have a GPP period when strength training resumes full swing after a season even if the athlete is extremely strong or has a lot of experience in the weight room. The body will be in a somewhat de-conditioned state after the long season. The argument could even be made that this is more important for veteran athletes compared to younger athletes. (Keep in mind that we are not talking about novices here. Novices would first need to work on general strength and repeated effort methods along with mastering their own body weight in exercises such as the pushup and squat.)

Speed strength training involves exercises in which a high acceleration and moderate to heavy weights are used (Verkhoshansky, 2009, Thibaudeau, 2006). Compare this with the typical bodybuilding style training that is so popular: moderate weights, high volume and slow repetitions. Most sports are played in a ballistic and dynamic manner. Training should be designed to reflect this. Many athletes have phenomenal physiques (i.e., jacked with a lot of muscle) as a side effect of their strength training. Most do not set out to gain a ton of muscle; rather they are looking for ways to improve their performance. This tells us that muscle can be gained through other forms of training and these forms of training can greatly enhance performance, something that bodybuilding training will not do. 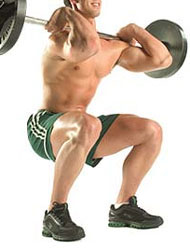 Sarcoplasmic hypertrophy: The volume of the non-contractile protein and semifluid plasma between the muscle fibers increases. Although the cross-sectional area of the muscle increases, the density of muscle fibers per unit area decreases and there is no corresponding increase in muscle strength.

Sarcomere hypertrophy: An increase in the size and number of sarcomeres which comprise the myofibrils. These may be added in series or parallel with the existing myofibrils, although only the parallel growth with contribute to an increased ability to produce muscle tension. The area density of myofibrils increases and there is a significantly greater ability to exert muscular strength.

Obviously, we want sarcomere hypertrophy for our athletes. Sarcoplasmic hypertrophy leads to added body weight without an increase in strength, essentially a less powerful athlete, the exact opposite of what we are trying to create. Excessive muscular hypertrophy also constricts the vascular system, making nutrient transport more difficult and therefore recovery will be more difficult. With the development of nonfunctional hypertrophy, the increase in muscle mass outstrips the development of the vascular system. This results in diminished nutrition and oxygenation of the muscle, slowing down of metabolic processes in the muscle and less efficient disposal of metabolic waste products from the musculoskeletal system (Zalessky & Burkhanov, 1981). Thibaudeau makes a great analogy by saying sarcoplasmic hypertrophy is like increasing the weight of a car but not the strength of its engine.

It is also important to remember that under conditions of rest and recovery, most of the energy is directed towards protein synthesis, whereas most of it is directed to muscle contraction during intense exercise (Verkhoshansky, 2009). This is a key point to remember when designing your strength and conditioning program, YOUR ATHLETES GROW AND GET BIGGER AND STRONGER WHEN THEY ARE RECOVERING! More doesn’t mean better in this case.

Data shows that the longer and more strenuous the submaximal loading (not explosive, rapid movement as seen in Olympic lifting), the less there is sarcomere hypertrophy and the more there is sarcoplasmic hypertrophy. Legendary strength coach, Charles Poliquin popularized the time under tension (TUT) method for gaining muscle mass in the mid 90’s. Indeed this is great for gaining overall mass, but it is probably better suited for those looking for aesthetic results, novice trainees or athletes that need to improve strength-endurance more so than explosive athletic performance.

The bottom line is that there are two different types of muscle growth. We should never have our athletes gain weight just for the sake of gaining weight (unless they are a bodybuilder or sumo-wrestler). In order to gain functional hypertrophy we should emphasize explosive movements, compound movements and keep the reps under eight. All bodybuilding style training is not bad and it can in fact lead to some functional hypertrophy, but it should not make up the majority of the program. There are always exceptions to the rule, but this is a great place to start.