You are at:Home»Exercise»Banking Strength – Save Energy on Workouts To Avoid Plateaus

When I was younger I believed in the notion that the human body resisted getting in better shape. I believed that every cell in my body was geared towards staying smaller, weaker and efficient as possible. This belief led me to view exercise as a method to punish and train the body through pushing it against its utmost limits of potential. Unfortunately, this led to a lot of burnout, frustration, injury and lack of motivation. Pushing to one’s limits is occasionally necessary to maximize one’s potential, but doing it all of the time is very taxing on the mind, the body and even the spirit.

Thankfully, I discovered the method of multidimensional progression and I understood that you don’t have to push yourself to your absolute limit to tell your body to change and improve. It was a great relief to know that I could improve within the aspects of intensity frequency or technique to find progression rather than just simply taxing myself as hard as I could. This led me to the realization that the body changes because we progress our exercise rather than just simply tax the body through maximum levels of pain or suffering. Not only does this save loads of stress and frustration but it also helps protect ourselves from burnout, injury, overtraining and boredom.

In today’s article I want to talk about another concept that this opens us up for. It’s a concept that many people often discredit but it’s a very valuable lesson to those who want to maximize their potential and maintain the results for years to come. Today I’m talking about the concept of banking strength. Banking, or milking, strength is just like banking money. It’s like putting a little bit away with every workout, rather than spending it, so that you can save it up and use it for a future event.

So instead of constantly spending everything we have, we save a little in the tank. It might seem like slightly holding back in overall effort may hold back the potential to advance, but in fact the opposite is true. Constantly pushing yourself to the absolute limit of what you’re capable of with a workout is not unlike always trying to spend every penny you make with each paycheck and never saving anything up. It’s fine as long as your expenditures or your demands remain the same but once life demands a little bit more of your resources, you can quickly find yourself over extended and in an energy debt. 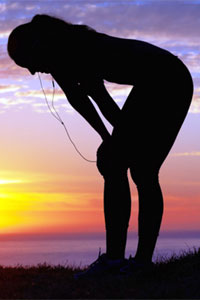 This is why banking strength is so very important. It gives you a buffer to handle the ebbs and flows of excessive stress that happens in your life. Not just the stress and strain from exercise but the stress and strain from everything that causes you to spend your precious energy. The first thing to understand about banking strength is to know that no one ever got in better shape by putting themselves through exhaustive workouts. Putting every drop of effort you have into an exercise is never a guarantee that you will become in better shape. If hard work and effort was enough, we would have a lot more fitness success in this country.

Imagine if you will, coming in to workout and you haven’t slept for three days and you’re hung over from partying the night before. On top of everything else, you are stressed out about your job and you can’t seem to get your mind focused on the exercise at hand. As a result, the workout is very difficult to do. It’s so difficult in fact that you can only work at a fraction of the intensity and the volume that you normally workout at. On top of everything else your technique is shaky and you have difficulty maintaining your balance and control in some of your exercises.

Maybe you built up some mental toughness or a little extra discipline from putting yourself through such a workout but at the end of the day you didn’t actually train your body or mind to be able to do anything above and beyond what it’s done before. In other words there was very little, if any, progression to train your body to do anything better.

Hard work alone doesn’t tell your body to be in better shape. Training your body and your mind to step up and perform at a higher level is the root cause that makes all changes and fitness happen through exercise. This is very important to understand because you can train your body or give it new information, like downloading new programs into a computer, without taxing yourself to your absolute limit. Sure, training your body with new information can be very hard work. There are times where it will require you to dig deep down to a new level you didn’t know existed before. But that’s not always the case. Sometimes you’ll find yourself able to train at a higher level of performance relatively easily. As long as the new and advanced information is coming into your body, you will get in better shape regardless of whether or not you feel yourself pushing to your absolute limit.

For example, let’s say you have two individuals, Sam and Bob, who are both looking to improve upon how many push-ups they can do within a minute. Sam’s strategy is to see how many push-ups he can do with each workout. At first, he can only do 10 push-ups but within a short period of time he’s up to 23 push-ups in that minute. Each attempt he does is an all out effort where he puts everything he can into the exercise. 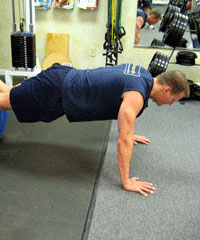 Bob, on the other hand, is not quite as aggressive. With his first attempt at the minute record he puts in about 60% of the effort. Even though he only does eight push-ups on his first attempt he walks away knowing that he can easily break that record on his next workout. During the next attempt he gets nine push-ups during the minute but still holds himself back a little bit. He knows he is capable of doing more but he also knows that he just performed to a higher level than he did previously. Once again, he is fully confident he can break his personal best within his next one or two workouts.

After a month of doing this, both Sam and Bob are working very hard at achieving their goal of 30 push-ups during a minute. The only problem is that Sam is starting to feel frustrated and burned out about the exercise. He was making spectacular progress at first, but now feels like he is stuck at 26 push-ups. Every time he does the test he feels the same stress and pressure in his muscles leaving him fatigued and unable to continue at 25 or 26 reps.

Bob on the other hand is still charging forward. Not once has he pushed himself to his absolute limit. He ended every single workout knowing that he could push himself to at least one more rep upon the next attempt. Even though he wasn’t pushing himself to his limit, he still continued to become stronger as his body still was receiving the information to be able to do more push-ups within a certain amount of time. As a result, Bob surpasses Sam and keeps advancing to the point where he’s nearly up to 50 push-ups within a minute while Sam is still struggling to meet the original goal of 30.

When we push ourselves consistently to what we believe is the limit of our physical potential we start to create the habit of that limitation. If we constantly only hit 25 push-ups at a time, we effectively train our body and our mind to always end at that level of performance. It’s the proverbial glass ceiling if there ever was one. However, when we effectively train within our means we are also continuously telling ourselves that we can still do more and that we can explore those limitless reaches of performance at any time.

In essence, we are not training ourselves to recognize limits. If we don’t constantly train ourselves that we have a limitation then we don’t know where our limits are and we forever feel capable of doing more. This is one of the biggest reasons why I have not hit a plateau in over three years. Every single time I workout I fully expect to advance my capabilities in some way, shape or form. I’m always improving my technique or adding some volume or adding some intensity. Sometimes I’ll even add all three at once. I see absolutely no reason why I cannot keep advancing my fitness for years to come. At the same time, I’m not burning myself out. I have no injuries, I have no frustrations and I feel plenty of excitement and motivation to train.

Banking strength takes a lot of discipline and focus. It’s not easy to hold yourself back sometimes especially when you feel like you’re charging forwards like a rhinoceros on speed. Sometimes you may feel like you can turn in a performance that is far and above the level of what you’re usually doing. When this happens, I encourage you to slightly hold yourself back and bank some of that strength in the workout that you’re doing. I know it can be tempting to blast your personal bests out of the water but such a thing can sometimes set up a trap that results in long-term frustration and burn out.

We’ve all had workouts where everything seems to come together where we have almost limitless energy and we can just keep pushing ourselves to ever higher levels of performance. While these workouts are certainly a lot of fun, they do have the potential to set records that we may not be able to break for quite a while. If you should set a performance personal best that is so high that you may not be able to even match it for some weeks on end, you effectively tell yourself that there’s a limit you are not capable of achieving. Each attempt that falls short reinforces the idea that the next personal best is beyond your normal reach. It’s for this reason, that I encourage you to still break your personal best record but do so with prudence and modesty. That way you keep your PR within striking distance even when you’re not optimal during a workout.

Of course this sort of thing pertains to working out and training. Competition is a whole different subject. If you have the potential to blow your competition out of the water and win big, by all means go for it. Just keep perspective on the fact that the high level of performance was in a competition setting and not the mundane day-to-day settings of training and working out.

So don’t be afraid to hold yourself back just a little bit. Relax! The heavy weight and the extra miles are not going anywhere. Give yourself permission to hold back just a little bit while at the same time using the model of multidimensional progression to always be moving forward. Together, multidimensional progression and banking strength should enable you to be plateau free for years to come.