The Internet is ablaze with fitness buffs debating The Biggest Loser television show and its spawn of local biggest loser contests. Some give it props while others decry it as evil and misleading.

I decided to do some research and volunteered to be a biggest loser trainer for a group of six people here in Vermont’s Champlain Valley. Here’s what I discovered:

#1 – We can put ourselves through a lot more than we think.
This contest had previously sedentary folks doing longer workouts and cutting more calories than our fitness culture usually deems prudent. I told my group to aim for three hours of activity a day and most of them consumed between 1200 to 1500 calories a day. It was a wake up call to those who were worried about overtraining and entering into the now hotly debated “starvation mode”.

#2 – Be prepared to change.
It was striking to see how many people literally turned tail and ran from the changes they saw taking place. After a few weeks, some folks actually voiced their resolve to throw their weigh-in and not show up for workouts. 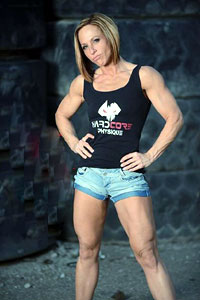 Making changes happen that you have been struggling after for years can be scary and a little bit humbling. To a degree it means that you have to recognize that you have always had the power and ability to change. These drastic changes were forcing the contestants to admit that all that stuff about slow metabolism and genetics was just a bunch of excuses. If you want to make big changes in your body, be prepared to face yourself in the mirror and accept the fact that you are powerful. It can be one of the most frightening things you ever do.

#3 – Be ready for some social backlash.
We all see the ending scenes on the show where the contestant goes home to adoring fans and tears of joy from their relatives, but there can often be a darker vibe on the home front.

Not that your friends and family wish ill upon you, but bringing about a big positive change in your life can cause those closest to you to see themselves in a different light as well.

Some of the contestants discovered that their friends and family would actually try to sabotage some of their efforts out of subconscious insecurity about their own potential change. They came to me with stories about how their friends would pressure them to slack off and made light of their goals by saying it was shallow, vain or even unhealthy. Be very careful about who you include into your new or improve fitness habits.

#4 – Learn to depend on yourself and nothing else for your results.
The Biggest Loser contest I volunteered for was a huge success. My team had both the individual who lost the most weight during the contest and the one who lost the most after they went home. Friendships were forged and lessons were learned, yet within a month after it was over, it was as if it never happened.

I offered steep discounts to the gym where I worked for my team and free personal training for the rest of the summer. At the very least, I tried to keep e-mail contact and put together a few outdoor activities. We all vowed to keep the momentum going, however once the contest that glued us all together was finished, everything reset to where it was before.

It’s very important to put sustainable actions into place that you feel comfortable with keeping for the next decade or so if you want to keep your results. I can only hope that my team learned their lessons well and no one relapsed once the resources we used were no longer available. Even the most effective weight loss and workout programs can only offer sustainable results if the methods themselves are sustainable month after month and year after year.