You are at:Home»Exercise»Will Muscle Turn into Fat if I Stop Working Out?

If a person stops working out with weights, will they go back to being fat and flabby? Will all the muscle I gained while weight training be turned into fat if I stop exercising?

I’m glad you asked this question as it is one of the biggest myths when it comes to weight training. Like you, when I was young and just beginning a weight training program, I used to hear this statement constantly. Everyone from my friends to my own mother would tell me, “Well you better stick with it because if you stop all that muscle is just going to turn into fat!” At that time I never gave that statement much thought because I was gung-ho about lifting weights and I loved doing it. Since I never envisioned myself quitting, the validity of the statement never crossed my mind because as far as I was concerned the statement didn’t apply to me. From my freshman year in high school to my sophomore year in college I must have heard this statement a hundred times or more from various people. And each time I heard it my internal response was the same, “Well I’ve been doing this for years now and I have no plans to ever stop so who cares?” But it wasn’t until my sophomore year in college that the validity of this claim was quickly put to rest.

During my sophomore year I chose to take an anatomy class to fulfill one section of my course requirements. This class consisted of both a lecture and a lab class. If you are unfamiliar, a “lab” is simply short for laboratory, meaning it is laboratory work where you get to do hands on assignments to facilitate the class lectures. Being that this was an anatomy class, our lab work consisted of working on cadavers. Yes, that means dead people. This undergraduate lab class consisted primarily of looking at the muscular and skeletal systems of the body so the cadavers we worked with were already prepared for us to study by the graduate students. Forgive me if this seems graphic but this preparation consisted of removing all of the outer tissues of the body to expose the musculature and skeletal systems. Though this may sound “gross” from an everyday point of view, it is actually a wondrous and humbling experience to see what we are all actually made of. To witness this incredibly complex assemblage of biology completely overshadows any thoughts of being “grossed out” because once you get past this silly notion you can truly see the beauty and complexity of the human body. 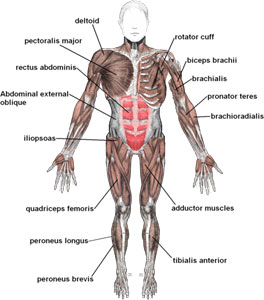 One of the suggestions our instructor had as an extra credit assignment was to go watch the graduate students prepare these bodies for us. This really served two purposes. The first is that you would need to see what it looks like to see a fresh cadaver (or to put it bluntly, a real dead body) as most people at the college age have not. This may sound like a morbid suggestion but keep in mind that most of the students in this class were pre-med students many of which wanted to be surgeons so the initiation into seeing what they will invariably see in the future is an invaluable process. It forces one to really ask themselves the question, “Is this for me?” The other more specific value it had was that you get a sort of head start on future lab work by seeing what you will be studying in the advanced levels of course work.

It was during one of these graduate level labs that the truth was literally set before my eyes. The instructors and grad students were extremely helpful in explaining every detail in what they were doing. Now, so as not to expose you to any more graphics than necessary to illustrate my point I will keep this concise. As you enter under the outer surface of the body, you soon come to what is commonly called fat. But the word fat, in regards to the human body, is called adipose tissue. And this tissue is found throughout the body. For example, it can be found within the abdominal wall (called visceral fat) or it can be found just beneath the surface of the skin (called subcutaneous fat). As we venture further inside the body we soon come to what is called muscle tissue. Muscle tissue, which is also found throughout the body, comes in the form of cardiac muscle (the heart), smooth muscle (in the walls of the organs) and skeletal muscle (anchored to the bones by tendons and ligaments). All of this muscle is composed of very different elements than adipose tissue. Muscle is primarily made of fibrous tissue composed of proteins. Whereas adipose tissue is primarily made up of energy storage units called lipids. In other words they are completely different tissues. Actually seeing this before my eyes, I pointed to one of the muscles lying inside of a layer of fat and blurted out, “So if I quit working out my muscle won’t it turn into fat?” After all of the laughter, one of the graduate students remarked, “That’s funny but biologically speaking, being that they are both primarily composed of proteins, if anything, your muscle would be more likely to turn into hair!” The bottom line is that muscle is muscle and fat is fat. They are two completely different things and one can’t turn into the other. It’s a little like asking, “Will gold turn into silver?” and the obvious answer is no, it’s simply impossible.

To this day I still laugh when I think about his response but the humor in it resides in how silly the notion was in the first place. In reality what happens is that someone who is very active, regardless of whether it is running, biking, hiking or lifting weights, they will naturally have an increase in their daily calories to accommodate this extra demand. When you stop exercising but continue to eat the same amount, slowly but surely the body will store these excess calories as body fat. As the person continues to remain inactive, the muscles will also atrophy (become smaller). These two processes combined create an outward illusion because your muscle mass has decreased while your fat mass has increased leading to the faulty assumption that somehow your muscle has turned into fat. Also, many times what happens is when a person stops exercising, they start slacking on their diet and they go back to eating the high calorie foods they were used to eating before they started their exercise plan, so end up consuming many more calories on a daily basis which leads to fat gain. So the next time you hear someone say that your muscle will turn into fat when you stop working out, just tell them you heard that it can also turn into hair. You’ll get a good laugh!