You are at:Home»Exercise»Box Squats for Bodybuilding – Tips To Build Big Powerful Legs

When I was competing in natural bodybuilding shows and even now, one of the biggest weaknesses for competitors was a lack of glute and ham development. I remember we used to try to carve them out with leg curls and glute kick back machines. The only problem with many of the machines is that they only work one portion of the muscle at a time, usually the insertion. I was always saying back then to my training partners that we needed to invest in a sled. The point being that I knew the whole range of the muscle had to be worked for complete development. While I am currently on hiatus from competing, I still have a few clients that compete. Their training is far from the norm for traditional bodybuilding. They get a blend of athletic development and some traditional bodybuilding movements along with the proper diet. However, the purpose of this piece is to show you the importance of box squatting for bodybuilding (keep in mind, that even if you don’t compete, you can use these techniques to help you get jacked).

I know firsthand from training for shows and having many training partners over the years that bodybuilders often think they know how to squat, when in fact they let their egos get in the way and perform more of what looks like a quarter squat, often with 315 pounds on the bar. If you have ever attended a local bodybuilding show, you will notice that if there is any leg development at all, it is often on the front side with some lines throughout the quads, but when they turn around, the hams and glutes are nonexistent. This happens so often that if a competitor does have some definition back there, they are normally put into the winners circle. Without going off on too much of a tangent, there are many problems with the way that most bodybuilders train their legs. 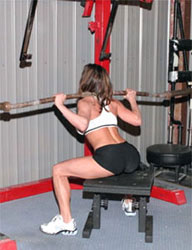 Box squatting the correct way, as described in Dave Tate, Jim Wendler’s and Louie Simmons book, can be used for superior posterior chain development for bodybuilders. Instead of doing only max effort and dynamic effort days, bodybuilders can use box squatting and other substitute movements (i.e.- good mornings, RDL’s, deadlifts, glute ham machines, sleds, etc.) with moderate weight and higher volume. When examining how these moves incorporate the hamstrings, glutes, lumbar and spinal erectors, they are far superior than trying to isolate these muscles on machines.

Box squatting emphasizes driving the butt back or squatting back instead of down. This helps to put the glutes and hamstrings into a stretched position. When the box level is reached, this breaks the eccentric-concentric chain and although the glutes and hams want to relax, they can’t since they need to be activated to complete the box squat. Kinetic energy is stored in these muscles during the brief pause on the box, much like what happens in plyometrics. Another great benefit for bodybuilders is that the box regulates our squatting depth, no more doing quarter squats or thinking you went deep enough because you got a little out of your comfort zone. Box squatting and any of the above mentioned substitute exercises emphasize both the origin and insertion of the muscles. The more muscle worked, the more development you will have.

Bodybuilders can even use cycles of max effort and dynamic periods in addition to their higher volume days in order to recruit different motor units and train more of the fast twitch fibers, giving their muscles a denser, harder look on stage. My bodybuilders have had great success using many of the principles I use with my athletes (with a bodybuilding tweak of course). The idea is to think outside of the box and stop doing only what is traditional when it comes to getting bigger and competing if you choose to do so. Another example is doing hours of cardio to get ripped, which is a bunch of BS, but that is another story for another day. Read my follow up article Box Squats For Bodybuilding – Part 2 to learn specific sets, reps and exercises to use!