It’s one of the most common things that men want – bigger, more muscular arms. I mean, who wouldn’t want them? Even through the confines of dress shirts and business attire, muscular arms demand attention. As men, we are predisposed to having proud, muscular arms by our hormonal starting points. While genetic differences may show a difference in size and shape of the arms from person to person, men can get their arms built much more than a woman.

It is important for men to briefly understand how the upper arm muscles work to get the best benefit from exercising them. Let’s take a quick look at the anatomy of the biceps and triceps to best understand how to attack them in the weight room.

Behind the Scenes with the Biceps and Triceps
The biceps are actually two-head muscles (‘bi’ meaning two, like in bicycle) and the triceps, in turn, have three parts to them. The biceps muscle connects to your upper arm bone (the humerus) and the front side of your shoulder blade (also called the scapula, this is the bone that connects your arm bone with your collarbone). Further down your arm, both heads of the biceps muscle join together into one tendon that connects to your radius bone, one of the bones of the forearm. Because of way the biceps connects to the different bones, it allows it not only to control the flexion of the elbow joint but can also contribute to the rotation of your wrist as well. Your triceps muscle also attaches to the scapula and humerus, although all three heads combine together into a single tendon mass that connects to the other forearm bone (the ulna) and give your body the ability to extend your elbow joint. 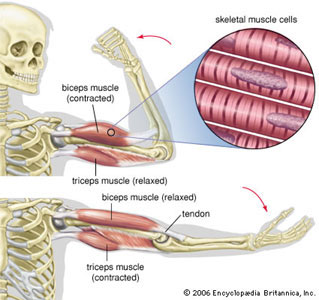 Your biceps and triceps muscles move the same joint in opposite motions, extension and flexion. Scientifically, they are called antagonistic pairs for this very reason. The important thing to remember is this: your biceps and triceps work against one another at the same moment in time to provide stability to your elbow joint. That means that these two sets of muscles will help hold your elbow joint steady if it’s under pressure. It also means that if there is an imbalance between your triceps and biceps muscles, you can be setting yourself up for injury.

The Common Sense of Arm Size
When most people are asked to make a muscle, do you know the number one muscle that is flexed? You probably guessed it – the biceps. Did you also know that this muscle actually comprises less than half of the muscle mass of the upper arm? It’s true – the triceps muscle actually makes up more than half of the upper arms muscle mass and yet is often neglected by the very same people seeking to get ‘bigger guns.’ Since the muscle heads of the biceps and triceps are roughly the same size if you could take all of them apart and lay them next to one another, it does make sense that a muscle with three heads would be bigger than a muscle with two heads. At the same time, the most important thing to understand here is that by correctly working your biceps and your triceps along with a couple of supporting upper arm muscles, you will be maximizing your muscle growth potential. A swooping triceps muscle can help accentuate a bulging biceps muscle even more. With that said, let’s take a look at some key exercises that can take your arm size to the next level.

Key Exercises
For all of these exercises, please pay close attention to the following items: 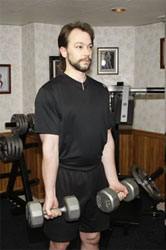 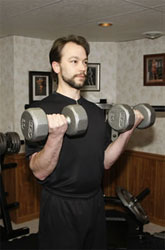 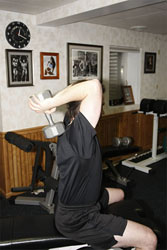 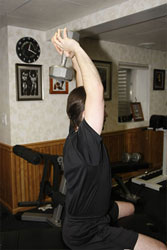 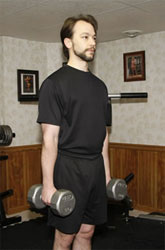 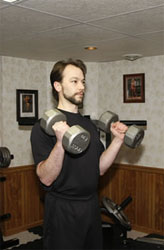 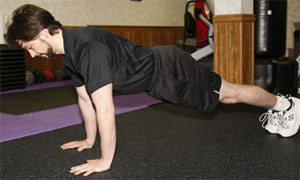 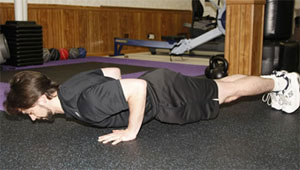 Some Additional Movements
While all of the fundamental mass-building arm motions hinge off of the above exercises, there are a couple of variations that are good to know about. Generally, these involve slight variations of wrist position or the angle at which the arm muscles are attacked. For non-cable upper arm curling or extension exercises, the most challenging point of an exercise is generally when your forearm is parallel with the ground. This will happen roughly around an elbow bend of 90º with a standard curl. But if you change the position of your upper arm, it’s possible to alter the angle of the elbow when the forearm is parallel to the ground. For instance, preacher curls hit this point when the elbow is quite extended, while concentration curls hit this point when the elbow is mostly flexed. Here is a non-exhaustive list of some other exercises that can be utilized for building bigger guns. 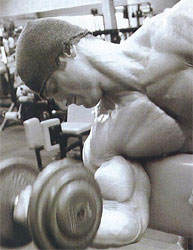 The following techniques will detail out particular phases to cycle your arm training. This will keep the stimulation coming from all angles and is a global perspective compared to actual exercises. Too many times people focus on specific exercises for results instead of how these exercises are utilized. The exercises are the tools, but the application technique is the method to use the tools for their best use.

The term ‘phase’ is used below to describe a period of time. In general, this should encompass a biceps workout and triceps workout during the same week for simplicity’s sake. Consider a single productive workout for a muscle group as the passage of one phase. While your own body will have different recovery periods when compared to the person next to you, it’s important to note that every person will need some recovery time after hitting a specific muscle group to avoid overtraining, a dangerous state leading to inevitable injury and stagnated results.

The Strength Phase
During the strength phase, it’s important to push the limit strength of your muscle for better power development. The goal here is to hit heavier weights, thereby forcing a lower rep range. Strength training like this may not leave you with a great pump, but it will certainly build the base power of your muscle and force it to respond like no amount of higher rep sets can provide. You will probably need longer rest times between sets here and the total number of sets performed can be lower as your body can only produce near-maximal output a couple of times before it cries ‘Uncle.’ Always be sure to use proper warm-up techniques before lifting in this range. The goal here is to squeeze out your reps with maximum intensity while using weights that restrict your reps down to the one to six range.

The Circuit Phase
During the circuit phase, the goal is to get a massive pump by hitting your muscles from multiple angles one after another. This isn’t a whole-body circuit, but instead stringing three to six different exercises together like a giant set and then repeating this set multiple times with rest between each circuit. Alternate triceps and biceps exercises so there is a slight bit of rest for each muscle group while you keep on moving. Here’s a sample circuit:

Mass Building Secrets
Now that you have some solid arm exercises along with specific techniques how to utilize these movements, it’s important to understand some critical pieces of information – secrets to building arm mass.

Wrapping It Up
We’ve covered a lot of ground here and by now, you’ve learned not only what your biceps and triceps muscles do, but how to work them best to blast your arms with awesome size and strength. Strong arms are a great compliment to balanced, powerful shoulder and torso joints. (And they look pretty darn impressive as well.) Have fun with it and go bring out the big guns!

Published, certified personal trainer Jim Cook has been helping people positively transform their lives through fitness for over eighteen years. He has used his varied background and vocational experiences to plug fitness understanding into clients' lives right where they need and want it. See my profile page for more information!