You are at:Home»Exercise»Calves Training – Exercises To Add Size To Your Calf Muscles

Many people are often at a loss as to how to get their calve muscles to grow. This article will examine different methods of calve training and what seems to work best. After reading this article, you will never again say, “My calves won’t grow.”

It is visibly apparent that fitness enthusiasts of different ethnicities have varying levels of calve muscle development. Usually it will look something like this: people of Asian descent have very large calve muscles, African American people calve muscles on the small side, while Latino and Caucasian people can range from small to large (please realize that this is a generalization and is by no means written in stone). Is this because Asian bodybuilders have some secret calve training program? Simply put, no. The calves are made up of two main muscles and they are: the gastrocnemius and soleous. The primary functions of these muscles are to plantar flex or push the foot down (think of pushing down on the gas pedal of your car). The origin or where the muscles start is at a very similar spot in most people. The calve muscles run down and eventually end with the Achilles tendon.

The difference in calve size seen in different races is most notably due to the insertion, or where the muscle ends. Please note that the insertion is technically where the tendon attaches to the bone, but for our purposes we are examining where the calve muscles ends. Asian people have a much lower insertion, followed by Caucasians and Latinos and finally African American people have the highest insertion. This means that for people of Asian descent, there is a larger muscle belly the further down the muscle inserts. There is a large area to develop through training and this is why we see a difference in calve size among the different races. 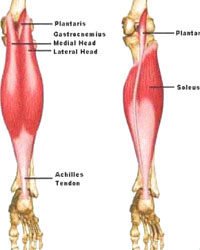 The calves are a thick, dense muscle made up of both fast and slow twitch fibers. They are constantly in use with everyday walking around. They can handle a fairly high training volume for being a small muscle group. That being said, they should be given ample rest between training sessions. As a generalization, the soleus is composed of a higher percentage of slow twitch muscle fibers compared to the gastrocnemius, which has a higher percentage of fast twitch fibers. It would be wise to train to these characteristics and perform in the 8-12 rep range for the gastrocnemius and anywhere from 20-50 for the soleus, with little rest between sets. These ranges and training methods are not the golden rule, just a guide as to where to start. Learn to read what your calve muscles respond to and ride it out until the response is minimized, at which time, switch it up and provide the muscle with a new stress.