You are at:Home»Exercise»Flex Bands – Exercise Band Training for Strength and Fat Loss

One of Columbus, Ohio’s worst kept secrets is an inconspicuous little gym in an industrial part of town. This westside neighborhood is home to small and medium-sized businesses that manufacture everything from industrial fasteners to…well, you name it and it’s probably here. You have to make a couple of zig-zags in the parking lot to find this place, and it won’t stick out because there are no picture windows or neon signs.

But those in-the-know can find it, because when they want to compete in weightlifting’s most prestigious events, they’re drawn here like a moth to a flame. Westside Barbell has earned the reputation of being the “strongest gym in the world.” Owner-trainer Louie Simmons is the go-to guy if you ever have the urge to bench-press a Buick. He has been a strength consultant to NFL and college football teams; and such is his fame among the sport’s elite that he has a stand-alone page on Wikipedia.

Simmons uses a mix of modern and traditional methods to build muscle, in a no-frills environment. You won’t find any juice bars, boutiques that sell leg-warmers, or even wallpaper at Westside, but you will find plenty of iron: plates and bars and racks as far as the eye can see. And rubber bands.

Yes, rubber bands! More properly called a Flexband, these are layered bands 41 inches in length, in different widths and tensions. They can provide as little as five pounds of resistance or as much as 200 pounds. Although used by Simmons’ high-end clients, they do have a place in the training regimen of the average gym-goer. 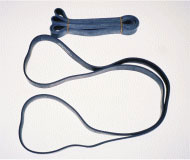 Flexbands can replicate almost any exercise that can be performed using a dumbbell, barbell, or kettlebell. The main difference is that while the resistive force of an iron weight is greatest at the bottom of the movement, a Flexband steadily increases in resistance towards the end of the movement, as the band stretches out.

There are several practical advantages to Flexbands over traditional iron weights. At less than two pounds per, and being as pliable as, well, a rubber band, they can easily be stored and carried-a must for travelers.

The deployment of a Flexband takes many forms. One common scenario is simply wrapping it around fixed objects, like a fencepost, support beam, or chin-up bar. (Caution: They can be used while power-walking or running, jumping, even something as pastoral as walking the dog (although we recognize that taking some dogs for walks can be anything but ‘pastoral’). If you train with a partner, each person can use part of the band at the same time, thus making maximum its efficiency.

A single band can be used to train with either one hand or two. Flexbands can be wrapped around one another. At the risk of sounding like some overused TV infomercial catchphrase, it truly is the ultimate portable gym.

Like any resistance weight, Flexbands can be used in a programmed manner to target a muscle group, then progress to higher degrees of difficulty and repetitions, ultimately increasing the recruitment of the surrounding stabilizing musculature.

Flexbands can be attached to other implements (e.g., dumbbell, barbell, or kettlebell) to make conventional exercises more challenging, and to ‘confuse’ muscles to avoid the dreaded plateau. The ‘pulling’ forces of the band change the dynamic and feel of the exercises dramatically.

One example is a squat. When doing a squat (with a barbell across your shoulders), the weight is hardest to lift while in the bottom position, as you begin to rise. The closer you get to the top of the movement, the easier it gets, as the barbell exerts a lesser degree of force on the contracting muscles. By adding a Flexband to each side of the barbell, on the outside of the plate clamp, and anchoring the other end to the lower regions of the Smith Machine (or standing in the middle of the two Flexbands, attached to each other), the bands stretch as you rise, making it progressively more difficult. This is called an “accommodating resistance.” The higher you go, the more the bands will try to pull you back down, making it an extreme exercise. Exertion on the upward excursion must be increased to avoid being forced to a point of equilibrium towards the lower median within the range of travel. (In other words, if you don’t work harder as you go higher, you’ll get pulled back to an uncomfortable point somewhere in the middle!) 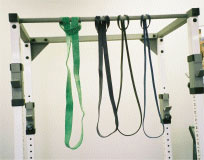 Another example is the beginner having difficulties doing chin-ups on their own. Attaching the band to the bar and putting their knees through the loop can offset a significant amount of body weight; yet the biceps are still worked hard as they get closer to the peak and the band’s tension decreases. Flexbands of lesser tension can be employed over time as strength is developed.

Another use for Flexbands is stretching-they can increase flexibility like no other implement. Most people see a dramatic change after just one session. But that’s an article for another day.

Some Words of Caution:

Give the bands a chance. Through proper selection of a combination of weights and Flexband tensions, exercises can be tailored to suit everybody from the beginner to the seasoned competitor. They’ll build strength and burn fat just like an old school iron weight, but without the hassle. They’re the cheapest and easiest way to start-up your home gym.

Jason Yun is a graduate of Ohio State University, where he earned a Bachelors of Science degree in Sports and Leisure Studies with an emphasis in fitness, coaching, and recreation. He first started in fitness in the bodybuilding arena in the early 1990's trying to follow in the footsteps of Arnold Schwarzenegger. See my profile page for more information!