You are at:Home»Exercise»Explosive Exercise – Increase Metabolism and Athletic Ability

If you have been following my writings or have had the chance to speak with me in the past, then you know my stance on ‘traditional cardio’. If you do not know what I am talking about, basically, unless you are an endurance athlete, why in the world anyone performs traditional cardio for health and enhanced body composition is beyond me. Traditional cardio was marketed brilliantly in the 1970’s and was/is very easy to implement. Because of this, many coaches and personal trainers, advised their athletes and clients to perform cardio and more of it, because more is always better, right?

If you want more science behind this idea, email me and I’ll be glad to send it over and discuss it with you. I have written numerous other articles on that topic, so I’d rather not get into the whole thing here. However, what I will do is give you a viable option to jogging, walking or using the elliptical (probably the least effective form). First, most team sport athletes perform in a combination of energy systems (anaerobic and aerobic). There is absolutely no reason for them to develop a ‘base’ by having them do long distance running that is not sport specific. Anaerobic (without oxygen) has also been shown to increase VO2max more than aerobic training, so you will get more aerobic benefit training anaerobically than you would aerobically.

Here is where the effectiveness of a conditioning program lies. Try running 100 yards. Next, try sprinting 100 yards. Finally, perform a shuttle run of 25 yards and back and then again, so you have to stop and start a total of four times. You will notice that the shuttle run is by far the hardest and gives you the most oxygen debt. This is what you are looking for if you want to A) get into sport specific condition (of course this depends on your sport) and B) get lean. Why could this be? If you are doing traditional cardio (remember, this means straight ahead movement), you accelerate and usually only at the beginning of your session, usually the hardest part, if you think about it. If you do shuttle types of running, which is even a form of interval training, but far more difficult than traditional interval training, you accelerate at the beginning, decelerate as you get to the designated distance, change direction and then accelerate again. 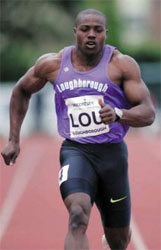 Do I even need to explain why this is much more effective at this point? It is applicable to athletes and trainees adjust rest time as needed. Start with 150 yard shuttles, performing a 1:3 work to rest ration. For athletes, this will train the whole posterior chain which is so prone to strains early in the season and during the season. If you were performing your coaches recommended ‘aerobic base’ runs, you would not have adapted to the demands of acceleration, deceleration and change of direction, which would leave you more likely to injure yourself. For the trainee, give it a shot, you’ll be glad you did.

On an offshoot of this, as far as injury prevention goes, everyday functioning and sport specific conditioning, try to start training on just one leg. That’s right, one leg only! Keep that leg flexed at about 20 degrees to get maximal activation of the glutes. This is called hip-dominant training and is viable for any person training for anything. The glutes are the controllers of most movements in the body. Doing a leg-curl is not functional and no one ever does this movement in the real world. Now, think about one-legged position, it happens all the time. No athlete has ever to my knowledge pulled a hamstring when both legs were planted on the ground at the same time, so why train with both legs on the ground at the same time? The hamstrings primary function along with the glutes is to extend the hip, secondly and only secondly, the hamstrings flex the knee. I’ll talk more about this in another article, just food for thought for now.

Speaking of food for thought, did you ever think of this saying? What exactly does is it mean? The bible says man cannot live on bread alone, but needs words as well. These sayings are all pointing to the importance of reading. Become of student of whatever it is that you want to be good at. How many people actually study wealth, happiness and health? They don’t happen by accident. Almost all the houses in this country that are worth more than $500,000 have a library in them, think that is a coincidence? I think not. Become of student of yourself and others and try to read at least a half hour per day. You can’t just live on mental candy either, you know, trashy magazines and all positive stories. Inspirational stories are good, but you need to read stuff that challenges your mind and forces you to grow.