You are at:Home»Exercise»Fitness vs Fatness – Being Skinny Doesn’t Mean You’re Fit

In the US people tend to put an emphasis on thinness over fitness. Being overweight is socially and medically unacceptable to most Americans. This trend is spilling over into the UK. People who are overweight are considered unattractive and unhealthy. Even in today’s day when the economy is in crisis, there continues to be an increase in spending on cosmetic surgery.

The British Association of Aesthetic Plastic Surgeons recorded 22,041 procedures carried out by its members last year, up 34.6% from 2004. The figures show that the majority of cosmetic surgery continues to be carried out on women with 19,601 procedures in 2005.

However as more research is done, doctors and other experts are learning that fitness is more important to a person’s well-being than losing the weight.

We all know that it’s not good to be overweight or obese; the dangers of both are well-documented: High blood pressure is twice as common in those who are obese as in people who maintain a healthy weight; a weight gain of 11-18 pounds increases one’s chance of developing Type 2 diabetes to twice that of people who maintain their weight; women who gain 20 pounds or more between age 18 and mid-life double their risk of post-menopausal breast cancer; for every 2-pound gain, there’s a 9-13% increased chance of having arthritis and the list goes on and on. But as serious as these risks are, recent research indicates that regular physical activity mitigates some of the harm caused by excess weight.

For starters, most people who exercise take off some weight and that can have a substantial impact on health. “Sedentary people who are overweight and start exercising do lose weight,” notes Kelly Brownell, Ph.D., director of the Yale Center for Eating and Weight Disorders in New Haven, Conn. “But they don’t have to get thin in order to be much healthier.” Indeed, exercise combined with even a small weight loss, such as 7-10% of body weight, dramatically reduces the risk of Type 2 diabetes, hypertension and other chronic diseases. 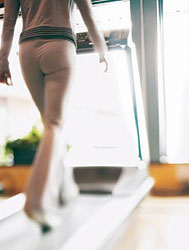 Studies are now beginning to show that people who are thin, but yet physically unfit die three times earlier than those who are a few pounds overweight yet are physically fit. There are still people, who insist that weight is a more important issue than fitness, but body shape is a bigger indicator. People who carry the majority of their weight in their abdomen are at higher risk for cardiovascular trouble than people who carry the weight in their hips and thighs. Either way though, those who are morbidly obese are at a higher risk of many health problems. But when a person combines a healthy diet along with a fitness program, odds are the weight will naturally come down as a result, lowering the health risks.

The growing emphasis on fitness rather than on thinness is a shift from the recent past, when most experts believed that to be healthy, people had to achieve an “ideal” weight or body mass index (BMI), an estimate of body fat. Steven Blair, P.Ed., President and CEO of the Cooper Institute in Dallas, thinks focusing on an ideal weight or BMI is ridiculous. “This is like saying people should be an ideal height or have an ideal eye color, it’s meaningless,” he says. “Even with optimal diet and physical conditioning, there is vast variation in weight.”

The body is designed to move. Inactivity will only result in even more inactivity because when you don’t move, muscles start to weaken and joints stiffen up over time causing movement to become more difficult. Women who are inactive and who have poor dietary habits run a higher risk of Osteoporosis in later life. It’s important to exercise at least an hour per day. It doesn’t have to be all at once, it can be broken down into 10-minute sessions done throughout the day. In the beginning it’s best to start off slow and work your way up.

Make sure before you start anything to check with your Doctor. Make sure the activities you choose are something fun that you will want to stick to. It’s not always wise to go out and spend money on expensive equipment or on a health club when the average person loses interest in it within a week. There are many activities that a person can do that cost little or no money. Walking is one of the best aerobic activities. For those who are able, there’s jogging, swimming, cycling, skating, volleyball, tennis and other activities.

Now according to the BMI measurements I would class as overweight and borderline obese. I run almost every day and am in the gym 5 times a week. I don’t have a slim physique but a muscular one and if I paid attention to the BMI index then there would be cause for concern.

There was a scientist; Blair who posed the question “Can you be fit and fat?” For eight years, Blair studied the health of nearly 22,000 men between the ages of 30 and 83 who had undergone complete physicals, treadmill tests for cardiovascular fitness, and body-composition assessments. His conclusions were startling to many doctors: Fitness turned out to be a far more reliable predictor of health and longevity than either weight or BMI. Unfit men with BMIs of less than 27 (18.5-24.9 is considered “normal weight”) had a death rate that was 2.8 times greater than men with BMIs of 30 or higher (considered obese) who were moderately fit. 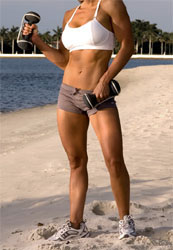 Last year, Blair published a study on the role that fitness vs. fatness, or higher BMI, plays in women’s long-term health. Among 9,925 women who had been patients at the Cooper Clinic at the Cooper Institute, moderately fit women of all weights averaged a 48 percent lower risk of dying prematurely (from all causes) than did unfit women. And highly fit women (those who could walk longest on the treadmill) had the lowest risk of premature death of all, nearly 60 percent lower than thin but unfit women.

“Among the women in our study who were at a weight level considered obese, with a body mass index between 31 and 33, we found 50.5 percent were fit, based on the treadmill test,” Blair reports. Even among the very obese women with BMIs of 37, he says, about 20 percent could walk long enough on the treadmill to be called moderately fit.

Anyone who has a BMI (Body Mass Index) of 35 or more is considered to be morbidly obese. This group of people is at the highest risk of sudden death, heart attack diabetes and numerous other health problems associated with this condition. For most people with this condition, exercise can be very painful due to the physical restrictions, and somewhat near impossible. There are ways to overcome this obstacle. To gain physical fitness the person will need to start off gradually and then increase activity as they get better able to. One of the best ways is with “Chair Aerobics.” There are classes available for this. Here are some tips for doing some starter exercises for those who may be bound to a wheel chair or to bed.

Starting off can seem like it’s an eternity, but after sticking with it, mobility will return and eventually walking a mile will seem like nothing.

A healthy diet is important at any weight. Thin people who eat excessive amounts of saturated fat are going to be putting themselves at risk for cardiovascular disease, just as being overweight and eating saturated fat would be. Also a high fat, low fiber diet has been linked to various forms of cancer. Diet and inactivity result in 250,000 preventable deaths in the U.S. per year. Smoking is the number one cause at 300,000 per year. It’s important to keep your daily fat intake at 30% of your total calories. Going fewer than 30% isn’t a good idea because the body needs a certain amount of fat each day in order to properly metabolize energy. That is way people who go on fat-free diets tend to not lose much weight. When choosing a diet make sure it’s low in fat and high in fiber. It’s also good to take a vitamin supplement when cutting calories to make sure to get the proper nutrition your body needs.