Functional training has long been a buzzword in our fitness culture. It’s a fantastic training modality but like everything else it can be abused, misused and is often misunderstood. It’s kind of funny to label certain exercises as functional because that would imply that there are other exercises that are not functional at all. While some folks might claim that to be the case, one of the most basic principles of exercise science says differently.

So now the question isn’t so much about what is functional, but rather what activities are we trying to be functional for? It’s an important question to ask because some exercises that are supposed to be functional may not be functional for what we need. In fact, some might even train our body to do the opposite of what we want! In the case of running, we can run in a number of ways. We can sprint, do steeple chases or do long slow distances.

I’ve known athletes who need to build explosive power but they go out and run a nice steady pace for 10 miles. Come game time, they wonder why they don’t have any of that explosive power. The answer of course is that they didn’t train for that power while running. If they were a marathon runner and only did sprints, they may find they have trouble holding a long and strong steady pace. Instead, they start off strong and then get progressively slower as the race goes on.

The lesson is that we need to have a clear objective to pursue in our quest to improve our ability to do something. We can’t just do any random training that’s labeled as “functional” and expect it to pay off. Because we only have so much time and energy, we must be picky about what exercises we choose when training for a functional purpose. We can’t train to do it all. No matter what, we are going to have to leave some skills or abilities behind. As always, it pays to know what you specifically want before we belly up to the endless buffet of exercise possibilities.

That being said, there are some basic functional principles we can follow for improving our overall everyday functional capacity. These are good for overall function but are not specific enough to optimize a 5K run time or the ability to bench press 400 pounds.

Principle #1: Use The Legs for Locomotion and Elevation 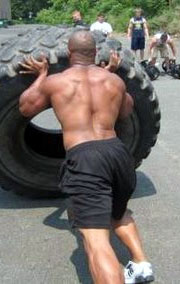 We primarily use our legs to support and move our body around. Therefore it makes sense to train the legs to do just that. Exercises like lunges, squats, sprinting, jumping and balancing on one foot are great examples.

Principle #2: Use as Little Support as Possible
Your skeletal muscle has two jobs. The first is to move your limbs through space and the second is to support and control your limbs so they don’t move through space.

When we use supports like belts, wraps, benches, racks and stools we essentially ask those tools to do some of the supporting which the muscles are supposed to do. While the use of these things is not bad, it’s key to keep in mind that we usually don’t have such supports in most activities and our muscles need to be ready to handle that.

Principle #3: Work In All 3 Planes of Movement
A lot of our exercises use movements that go front to back along the sagital plane. By incorporating lateral frontal plane and twisting movements in the transverse plane, we can better prepare our joints and muscles for optimal performance in our 3-D world.

Principle #4: Look for Exercises That Have a Lot of Functional Carryover
Picture yourself throwing a stone into a pond. As the ripples spread, you’ll notice that the impact of the ripples diminish as they spread away from the center. This is a useful analogy when looking at various exercises for how much functional carryover they might have towards a specific activity.

The direct center of the circle is the exercises that are the closest thing to the activity in question and hence have the best carryover. So if you’re looking to improve your ability to hike up a mountain, the exercise of hiking up a mountain with some extra weight would be very close to the center. A little further out, you might have something like sprinting up a long hill. It’s a very similar activity but slightly different.

While those exercises are not worthless, their similarity to the activity, of hiking up a mountain, is so different that they would have far less functional carryover than much more similar movements.

It’s Important to note that there are no special tools required for functional training. Things like balance boards, elastic bands or kettlebells are all fine and good, but there is no guarantee of any functional carry over just through using them alone. Too many people have spent hours balancing on foam pads while juggling weight plates only to wonder why they are not any faster in a 5K race.

In the end, functional training isn’t so much a special training method or the use of unique tools but rather a return to the most basic elements of performance of a given activity. It’s about stripping away the fancy and the inessential to get to the root movements and physical requirements necessary to excel in whatever you desire.