You are at:Home»Exercise»Functional Vs Traditional Weight Training Workout Programs

Functional training originated as a form of injury rehabilitation with exercises that are relevant to the movements of everyday life. Many traditional workout programs limit performance in specific hobbies, sports or daily movements, but functional fitness develops basic motor patterns to work at a higher capacity. Each functional exercise uses complete muscle activation and a purposeful movement pattern which allows for maximum strength gains.

Traditional weight training often only works one muscle at a time which is contradictory to the normal coordinated effort used to complete most activities. This type of training is more likely to lead to overuse injuries, muscular imbalances, and limit movement and strength gains. 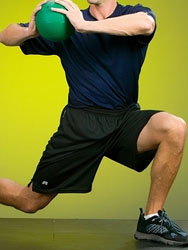 Functional strength training has become a popular buzzword in the fitness industry but is also subject to wide interpretation with very little agreement as to what it encompasses.

One school of thought espouses the mimicking of the explosive, ballistic activities of high-level competitive athletes. However, more times than not, such training programs greatly exceed the physiological capabilities of the average exerciser, which ultimately increases the possibility that an injury might occur. Most would agree that there is nothing functional about sustaining an injury due to improper training.

A middle of the road interpretation would have functional strength training defined as a movement continuum. Human nature and design have us perform a wide range of movement activities, such as walking, jogging, running, sprinting, jumping, lifting, pushing, pulling, bending, twisting, turning, standing, starting, stopping, climbing and lunging. All of these activities involve smooth, rhythmic motions in the three primary planes of movement; Saggital – A vertical plane passing through the standing body from front to back, frontal – directed toward, or situated at the front of the body and transverse – a horizontal plane passing through the standing body.

But, training to improve functional strength involves more than simply increasing the force-producing capability of a muscle or group of muscles. It actually requires training to enhance the coordinated working relationship between the nervous and muscular systems.

Functional strength training involves performing work against resistance in such a manner that the improvements in strength directly enhance the performance of movements so that an activity of daily living is easier to perform. In essence, the primary goal of functional training is to transfer the improvements in strength achieved in one movement to enhancing the performance of another movement by affecting the entire neuromuscular system.

In functional training, it is as critical to train the specific movement as it is to train the muscles involved in the movement. The brain, which controls muscular movement, thinks in terms of whole motions, not individual muscles.

In fact, your brain is a thinking organ that learns and grows by interacting with the world through perception and action. Mental stimulation improves brain function and actually protects against cognitive decline, as does physical exercise. Thus, the functional training actually provides a dual benefit in terms of brain adaptation and anti-aging.

The human brain is able to continually adapt and rewire itself. Even in old age, it can grow new neurons. Severe mental decline is usually caused by disease, whereas most age-related losses in memory or motor skills simply result from inactivity and a lack of mental exercise and stimulation. In other words, use it or lose it is the basic principle underlying functional training.

Exercises that isolate joints and muscles are training muscles, not movements, which results in less functional improvement. For example, squats will have a greater “transfer effect” on improving an individual’s ability to rise from a sofa than knee extensions.

For strength exercises to effectively transfer to other movements, several components of the training movement need to be similar to the actual performance movement.

This includes coordination, types of muscular contractions (concentric, eccentric, and isometric), speed of movement and range of motion. The more integrated the movement, the more effective the results of the training.

Each individual component of the training movement must be viewed as only a single element of the entire movement. The exercises with the highest transfer effect are those that are essentially similar to the actual movement or activity in all four components. It is important to note, however, that individuals cannot become expert at a particular movement or activity by training only with similar movements. For optimal results, repeated practice of the precise movement is required. 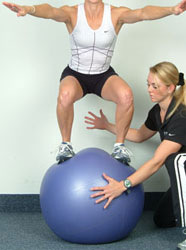 When you create a memory, a pathway is created between your brain cells. It is like clearing a path through a dense forest. The first time that you do it, you have to fight your way through the undergrowth. If you don’t travel that path again, very quickly it will become overgrown and you may not even realize that you have been down that path. If however, you travel along that path before it begins to grow over, you will find it easier than your first journey along that way.

Successive journeys down that path mean that eventually your track will turn into a footpath, which will turn into a lane, which will turn into a road and into a motorway and so on. It is the same with your training efforts: the more times that you repeat patterns of thought, activity and behavior, for example when learning a new movement or routine, the more likely you will be able to recall and repeat that process with greater efficiency. So repetition is a key part of learning and training.

Exercises performed on most traditional machines tend to be on the low-end of the functional-training continuum because they isolate muscles in a stabilized, controlled environment. While it may be true that traditional, machine-based exercises are not the best way to transfer performance from the weight room to the real world, it does not mean that such exercises should not be a part of a training program.

For example, “nonfunctional,” single-joint exercise can play a critical role in helping to strengthen a “weak link” that a person may have to restore proper muscle balance. Furthermore, doing such an exercise can allow an individual to more safely and effectively participate in functional-training activities while also reducing the risk of injury.

Traditional weight training often only works one muscle group at a time which is contradictory to the normal effort used for most activities including swimming, biking and running. This type of training is more likely to lead to overuse injuries, muscular imbalances, and limit movement and strength gains.

Functional training is designed specifically to incorporate all the muscle groups used in a sports activity including the all important core muscles which are activated in just about all the exercises involving normal activities of daily living.

In the final analysis, the key concept is that functional training is not an all-or-nothing concept. A continuum of functionality exists. The only entirely functional exercise is the actual activity one is training for. Accordingly, individuals shouldn’t rely on any single group of exercises. Individuals should use all the weapons in their training arsenal.