You are at:Home»Exercise»Get Fit Over 40 – Benefits of Exercise and Fitness at Any Age

Over 40 is definitely the time to join the “exercise regularly” group. You may have some idea of how “good” it is for you, but you probably could not begin to imagine what an understatement “good for you” really is. I think it is fair to say that regular exercise is the single “best” thing you can do for your heart, respiratory system, bones, joints and muscles. But then, to some extent, you probably knew all that.

What you might not know is that it is also one of the best things you can do for your eyes, ears, teeth, brain and happiness.

Exercise and Your Happiness
There is debate over whether you are more likely to find happiness or despair as you age. And the myriad of factors contributing to your particular outcome is enough to rattle your hard drive, but one thing that shows up on nearly all studies of aging and happiness is that happy people exercise. Of course, this brings us to that unsolvable problem of chickens and eggs. Do they exercise because they are already happy or does the exercise cause the happiness? It may not matter since at least two hormones that are involved in our sense of happiness, cortisol and endorphins, both react favorably to regular exercise.

It doesn’t really matter which is the prime mover, the happiness or the exercise. It is exercise that can keep that ball rolling. Exercise burns cortisol and that’s good. Cortisol is responsible for many stress reactions such as: anger, fear and anxiety. At the same time, exercise releases endorphins, the body’s opiates, and the endorphins then “park” on receptors that send both pain relief and euphoric feelings to the body.

In the case of happiness, even moderate exercise seems to be enough to greatly improve mood. Happy people who responded to studies usually weren’t obsessive about their workouts. But they did exercise regularly enough to keep cortisol down and endorphins up – 20-30 minutes, three times per week at about 80% of capacity.

Exercise and Your Brain
In 2010, the Texas Research Consortium counted 5.1 million people over the age of 65 with Alzheimer’s. They also counted another 200,000 people under 65 with Alzheimer’s. Further, Alzheimer’s is now the 7th leading cause of death (across all ages) in the United States – and growing. 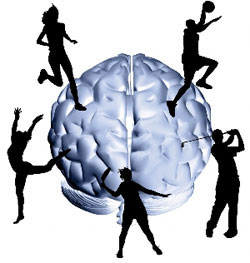 While other diseases are showing some response to improved medical care and medications, Alzheimer’s remains stubbornly impenetrable. Deaths from heart disease, breast cancer, prostate cancer and stroke are all down, but deaths from Alzheimer’s disease rose by 46.1 percent in the period 2000-2006.

Alzheimer’s continues to be without a cure and with only a few options for prevention. However, the good news is that physical exercise, according to the Alzheimer’s Research and Prevention Foundation, is one of those options. It reduces your risk of developing Alzheimer’s by “50 percent.”

So, if you need a new and compelling reason to exercise, cutting your risk of Alzheimer’s disease in half is a pretty good one.

Exercise and Your Eyes
Vision is always the last choice when people contemplate losing some function. And yet, as long as they are working, we tend to take our eyes for granted. We spend shocking amounts of time and money on our skin and hair, but time and money resources are very short when it comes to exercise which affects so many of our most precious bodily functions.

According to the American Society of Retina Specialists, Age-related Macular Degeneration (AMD) is the leading cause of blindness in people over 60. AMD risk factors include high blood pressure, obesity and aging. However, we know that regular exercise mitigates those conditions.

A University of Wisconsin research study also “pointed out that regular exercise is very effective against Age-related Macular Degeneration; although, the exercise needed to be of a higher intensity than just walking. Intense bouts of exercise, 3 times a week made the subjects “70% less likely to develop AMD.” While walking or other lower-intensity exercise made subjects “30% less likely.”

Exercise and Your Ears
Hearing loss used to be a given as a person aged and even now 1 in 3 Americans aged 65 or over have significant hearing loss. But you can reduce your chances of being the 1 in 3 with proper exercise. In particular, aerobic exercise helps to increase blood flow and circulation. Improved circulation floods the inner ear with nutrients.

In addition, aerobic exercise lowers cholesterol which can impede blood flow and starve the muscles of the inner ears. So, barring genetic considerations, you can keep your hearing as strong as that of a much younger person with a healthy lifestyle that includes regular exercise.

Exercise and Your Teeth
How does exercise help your teeth? Much research is being done to understand the role that inflammation plays in heart disease. Again, you ask – how does exercise help your teeth?
Inflammation is also associated with periodontal disease. Physical activity is cited to reduce the C-reactive protein in the blood associated with both inflammation in the heart and periodontal disease.

In a study conducted by the National Health and Nutrition Examination Survey, it was reported that “rigorous exercise three times per week or moderate activity five times per week reduced the likelihood of gum disease by one half.” Again, other healthy lifestyle choices like good diet and getting a little sunshine every day also contributed to improved gum health.

So, for the sake of your eyes, ears, teeth, brain and happiness, not to mention your heart, lungs, bones, muscles, blood pressure, joint mobility and coordination – get out there and join the millions who know that exercise works. Now is a great time to do it. And if you fall into the group who already exercise regularly – keep it up. The rewards are, a thousand times over, worth the effort.