You are at:Home»Exercise»Low Back Pain – Help Stability and Mobility with a Strong Back

Let me start off by saying that many of the exercise and biomechanics issues I present to you are not things I thought up. There are far brighter people than me in this field and it is my goal one day to be “one of them”. With that said, I simply read anything and everything that I can get my hands on by certain experts that I look up to. You and I, we all have 365 days to get smarter until next year, so become a learning machine. I state this simply to be sure that we learn from others and there is nothing wrong with that, all the great minds in history have followed the same path that you and I are on.

The first issue that we are going to deal with is low back pain. I believe this is one of the most common ailments of people who are between the ages of 20-60. I will have more to report on this in the future since I am just starting to read Stuart McGill’s book “Low Back Pain” which is the so-called bible on how to deal with and treat low back pain issues. For the time being though, let’s stick with what I have already learned from famed strength coach, Mike Boyle. If you think about the human body, it is one big stack of joints. And each of those joints alternate in their dominance of stability or mobility and if one is lacking in their main function, the next joint will try to make up for it. This can be a problem if you realize the joint below or above each joint has an opposing action (if we are talking about stability and mobility), so a stable joint essentially becomes more mobile and vice versa. Here is a list of joints and their specific action:

Now, I know that all joints can perform both mobility and stability, but the above is their primary function. This list is an interesting topic and one that I will examine more in a future article, but for now I’ll stick with low back pain. Many people are tight in the hip region due to sitting all day at work or performing limited range of motion (ROM) activities such as jogging. Limited ROM activities will destroy hip mobility! Yes, that is another reason that endurance athletes (joggers) are the most injured athletes in the world. Now, if we have a lack of hip mobility, guess which joint tries to increase its mobility to make up for the lack below? That’s right, the low back, thus leading to lower back pain.

An injured joint is almost always a symptom, meaning it does not originate there! That is the main problem with surgeries designed to correct injured joints, the surgery is just treating a symptom. So a symptom of what? It is a symptom of either the joint above it or below having dysfunction. In the case of the lower back, I would have to theorize that it is usually the hips and not the thoracic spine, but it could be in some cases. Hip mobility can take a while to get back to optimal. 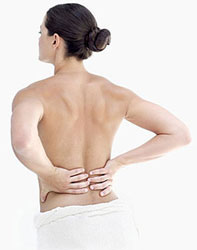 I would recommend some foam-rolling and intense stretching of the region. After that, you need to start addressing your exercise program and getting some more moves in there that will begin to work on regaining hip mobility. Think of lateral reaching lunges and lateral legs swings. Another interesting note, according to Porterfield and DeRosa by way of Boyle, Porterfield did an experiment with pig spines. He simply took them and moved them in and out of a flexed position (think sit-ups) repeatedly. Can you guess what happened? The discs ruptured! Think that over for a minute. There was nothing unusual going on just a piggy performing a basic crunch (don’t worry; it was just the spine, not an actual live pig). Even sports like baseball and golf use hip internal and external rotation, not low back rotation. I could continue to go on about the lumbar spine and the need to train the region with stabilization, but I will move on. I will however, report more on this as I learn more.

YOUR DESIRE TO SUCCEED
I had the great pleasure of hearing Martin Rooney speak about a month and a half ago. I have mentioned Martin before, but for those of you who don’t know, he is one of the most successful trainers in the field. He consistently has players drafted in the first round of the NFL year after year. His speech, interestingly enough had nothing to do with exercise science or nutrition. Martin talked about what you wanted to do in life. His enthusiasm was contagious. Martin talked about his rules, one of them being to read 20 pages per day. If you do this simple little trick, you will be a leading expert in the world in your field within 5 years! Read that again. Since seeing him, I have really been paying attention to some biographies that I have been reading for common trends. Read below as I highlight two of these individuals:

If we look at the above examples, there is something for all of us to take away from them. Whether it is your fitness goals, career goals or anything else, to be the best you can be you must live and breathe for it. Try it and see what happens! LIVE INSPIRED!