You are at:Home»Exercise»Muscle Cramping – How To Prevent and Treat Muscle Cramps

What Are Muscle Cramps?
When we use the muscles that can voluntarily be controlled, such as those of our arms and legs, they alternately contract and relax as we move our limbs. Muscles that support our head, neck, and trunk contract similarly in a synchronized fashion to maintain our posture. A muscle that involuntarily contracts is called a “spasm.” If the spasm is forceful and sustained, it becomes a cramp. A muscle cramp is thus defined as an involuntarily and forcibly contracted muscle that does not relax. This causes an obvious hardening of the involved muscle.

Muscle cramps can last anywhere from a few seconds to several minutes or occasionally longer. It is not uncommon for a cramp to recur multiple times until it finally goes away. The cramp may involve a part of a muscle, the entire muscle, or several muscles that usually act together. Some cramps involve the simultaneous contraction of muscles that ordinarily move body parts in opposite directions.

Cramps are extremely common. Almost everyone experiences a cramp at some time in their life. Cramps are common in adults and become increasingly frequent with aging. However, children can also experience cramps.

Any of the muscles that are under our voluntary control (skeletal muscles) can cramp. Cramps of the extremities, especially the legs and feet, and most particularly the calf (the classic “Charley horse”), are very common.

What Are The Types and Causes of Muscle Cramps? 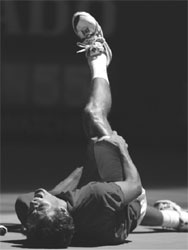 Skeletal muscle cramps can be categorized into four major types. These include “true” cramps, tetany, contractures, and dystonic cramps. Cramps are categorized according to their different causes and the muscle groups they affect.

Injury: Persistent muscle spasm may occur as a protective mechanism following an injury. Injury of the muscle alone may cause the muscle to spasm.

Vigorous activity: “True” cramps are commonly associated with the vigorous use of muscles and muscle fatigue. These cramps may come during the activity or even hours later. Likewise, muscle fatigue from sitting or lying for an extended period in an awkward position, or any repetitive use can cause cramps. Older adults are more at risk for these types of cramps when performing vigorous or strenuous physical activities.

Rest cramps: Cramps at rest are also very common, and can be experienced at any age, including childhood. Rest cramps often occur during the night. While not life-threatening, night cramps can be painful, disruptive of sleep, and they can recur frequently. The actual cause of night cramps is unknown. Sometimes, such cramps are initiated by making a movement that shortens the muscle. A common example is stretching the toe down while lying in bed, which shortens the calf muscle, causing cramps.

Dehydration: Sports and other vigorous activities can cause excessive fluid loss from perspiration. This kind of dehydration increases the likelihood of “true” cramps. These cramps are more likely in warm weather and can be an early sign of heat stroke. Sodium depletion has also been associated with cramps. Loss of sodium, the most abundant chemical constituent of body fluids outside the cell, is usually a function of dehydration.

Low blood calcium, magnesium: Low blood levels of either calcium or magnesium directly increase the excitability of both the nerve endings and the muscles they stimulate. This may be a predisposing factor for the spontaneous “true” cramps experienced by many older adults, as well as for those that are commonly noted during pregnancy.

Low potassium: Low potassium levels occasionally cause muscle cramps, although it is more common for low potassium to be associated with muscle weakness. 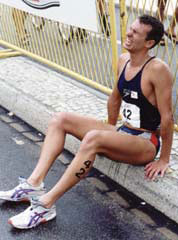 In tetany, all of the nerve cells in the body are activated, which then stimulate the muscles. This reaction causes spasms or cramps throughout the body. The name tetany is derived from the effect of the tetanus toxin on the nerves. However, the name is now commonly applied to muscle cramping from other conditions, such as low blood levels of calcium and magnesium.

Sometimes, tetanic cramps are indistinguishable from “true” cramps. The accompanying changes of sensation or other nerve functions that occurs with tetany may not be apparent because the cramp pain is masking or distracting from it.

Contractures
Contractures result when the muscles are unable to relax. The constant spasms are caused by a depletion of (ATP), an energy chemical within the cell. This prevents muscle fiber relaxation. The nerves are inactive in this form of muscle spasm. Cramps of this category are uncommon.

Some dystonic cramps usually affect small groups of muscles like the eyelids, jaws, neck, etc. The hands and arms may be affected during the performance of repetitive activities such as those associated with handwriting (writer’s cramp), typing, playing certain musical instruments, and many others. Each of these repetitive activities may also produce “true” cramps from muscle fatigue. Dystonic cramps are not as common as “true” cramps.

Other Causes of Cramps
Numerous medicines and certain disease processes can also cause cramps. Potent diuretic medications can induce cramps by depleting body fluid and sodium. Simultaneously, diuretics often cause the loss of potassium, calcium, and magnesium, which can also cause cramps.

Numerous medications have caused cramps as a major side-effect or interaction. Some medicines used to lower cholesterol can also lead to cramps.

Cramps are sometimes noted in addicted individuals during withdrawal from medications and substances that have sedative effects, including alcohol, barbiturates and other sedatives. Anti-anxiety agents such as Valium and Xanax, narcotics, and other drugs can also produce cramping.

Can Vitamin Deficiencies Cause Muscle Cramps?
Several vitamin deficiency states may directly or indirectly lead to muscle cramps. These include deficiencies of thiamine (B1), pantothenic acid (B5), and pyridoxine (B6). The actual mechanism in causing cramps is unknown.

Can Poor Circulation Cause Muscle Cramps?
Poor circulation to the legs, which results in inadequate oxygen to the muscle tissue, can cause severe pain in the muscle. This commonly occurs in the calf muscles. This pain may be due to accumulation of lactic acid and other chemicals in the muscle tissues. It’s important to see your doctor if you have pain like this.

What Are The Symptoms of Common Muscle Cramps? How Are They Diagnosed?
There are no special tests for cramps. Most people know what cramps are and when they have one. If present during a cramp, the doctor, or any other bystander, can feel the tense, firm bulge of the cramped muscle.

Usually a cramp is painful, often severely so. Often, the individual experiencing the cramp must stop whatever activity is under way and seek relief. The person is unable to use the affected muscle while it is cramping. Severe cramps may also be associated with soreness and swelling, which can occasionally persist up to several days after the cramp has subsided.

What Is The Treatment of Skeletal Muscle Cramps? 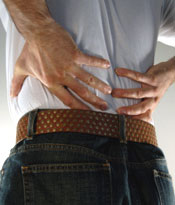 Most cramps can be stopped if the muscle can be gently stretched. For many cramps of the feet and legs, this stretching can often be accomplished by standing up and walking around.

For a calf muscle cramp, the person can stand about two to two and a half feet from a wall and lean into the wall to place the forearms against the wall with the knees and back straight and the heels in contact with the floor. Another technique involves flexing the ankle by pulling the toes up toward the head while still lying in bed with the leg as straight as possible. For writer’s cramp pressing the hand on a wall with the fingers facing down will stretch the cramping finger flexor muscles.

Gently massaging the muscle will often help it to relax, as will applying warmth from a heating pad or hot soak. If the cramp is associated with fluid loss, as is often the case with vigorous physical activity, fluid and electrolyte (especially sodium and potassium) replacement is essential.

Medicines are not generally needed to treat an ordinary cramp that is active since most cramps subside spontaneously before enough medicine would be absorbed to even have an effect.

The treatment of cramps that are associated with specific medical conditions generally focuses on treating the underlying condition. If cramps are severe, frequent, persistent, respond poorly to simple treatments, or are not associated with an obvious cause, then the patient and the doctor need to consider the possibility that more intensive treatment is indicated or that the cramps are a manifestation of another disease. Cramps are inevitable, but if possible, it would be best to prevent them.

Although cramps can be a great nuisance, they are a benign condition. Their importance is limited to the discomfort and inconvenience they cause, or to the diseases associated with them. Careful attention to the preceding recommendations will greatly diminish the problem of cramps for most individuals. Those with persistent or severe muscle cramps should seek medical attention.