You are at:Home»Exercise»Pickleball Workouts – Burn Calories With This Outdoor Exercise

Tennis anyone? How about badminton? Maybe ping pong? Try mixing them up and you have found the game of pickleball. Although the name sounds a bit inane, this ground-breaking sport is fast becoming a new craze.

How the name “Pickleball” originated actually differs. According to Joan Pritchard (wife of the co-inventor), she started calling the game Pickleball because “The combination of different sports reminded me of the pickle boat in crew where oarsmen were chosen from the leftovers of other boats.” However, Barney McCallum said the game was officially named after a Cocker Spaniel named “Pickles” who was the Pritchards’ dog who would chase the ball around and run off with it. According to Barney McCallum, “The Pritchards had a dog named Pickles, and you’re having fun at a party, right? So anyways, what the hell, let’s just call it Pickleball.” Others claim that both of these accounts may actually be true. In the early years, there was no official name that was assigned to the game. However, a few years after the game was invented, Joan and Joel Pritchard purchased a Cocker Spaniel and named it “Pickles”. As the game became more popular, an official name was needed and “Pickleball” was chosen.

It is easy enough for beginners, and yet can escalate into a competitive, sweaty and fast-moving diversion. Pickleball is being played on outdoor courts typically in the warmer, southern region of the United States, but never fear! This past-time is catching on so quickly that many health facilities have striped their basketball courts and are booking court time on a regular basis, claiming the indoor population as well. A match is played on a badminton sized court with a net 34″ in the center. Equipment consists of wooden, composite or even graphite paddles and a ball akin to a whiffle ball. Rules of the game are similar to tennis with some slight variations and matches can be played in doubles or singles. 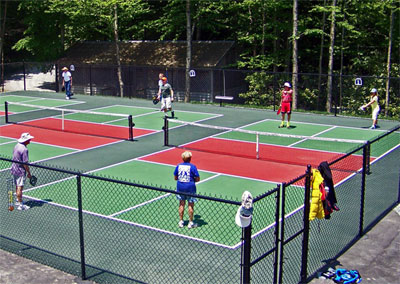 So what kind of action can a serious fitness enthusiast hope to catch on the court? You will definitely get your cardiovascular training and will keep the calories burning with constant movement. Although the court size is smaller than that of a tennis court (each side 22′ long x 20′ wide), the pace is swift utilizing quick sprints. When playing singles be prepared for a serious caloric burn, in the area of 500-600 calories per hour (or more depending on the nature of play and body composition). When moving into the more expert level and adding intensity into the game, plyometrics will come into play as you spike a shot over the net and jump for an overhead slam, adding to an even higher caloric burn and choice cardiovascular training.

The swing and impact of the ball is easier on the shoulders than in tennis, but still gives ample shoulder strengthening and the added wrist flicking motion incorporated in certain shots, will integrate more forearm muscle training. Because the paddles are shorter than a tennis or badminton racquet, you will find that employing low with powerful quick squats will enhance the game as well as your quadriceps and hamstrings strength. A strong core will play a major role, and because of the amount of reaching paired with a strong swing, you will notice your obliques get a run for their money with ample laterally flexed and twisting movements of the spine.

Of course, as in any sport, you may find areas of your body that may take a “hit for the team”. Predominantly, knees and ankles, because of quick lateral movements, would be prone to injury and should be considered if you are post injury in those areas. As well, because of the lateral flexion and twisting of the spine, anyone with prior spinal injuries should heed caution.

All in all, I have found this new sport to be entertaining and exhilarating and would recommend play to all ages. For more information, on rules, places of play as well as instructional videos, visit USAPA.org the home of USA Pickleball Association.

I am a freelance writer and fitness enthusiast. During the past two decades, I lived passionately as a group fitness instructor, having taught just about every class. I have always been an avid nutrition guru and found exercising my creativity with healthy cooking to be quite entertaining. See my profile page for more information!