Recent research may hold hope for those individuals at risk for developing a condition known as metabolic syndrome. This condition occurs when an individual possesses three or more risk factors which combined, increase their risk for coronary heart disease (CHD) and other diseases including diabetes.

Metabolic syndrome is known by several names including insulin resistance syndrome, obesity syndrome and syndrome X just to name a few. Regardless of what you call it, the condition affects some 35 percent of adults living in the United States.

Are you at risk for metabolic syndrome? If you’re unsure, the good news is that its relatively easy to determine your risk for developing the condition, especially if you’ve had recent blood work performed.

The well-documented risk factors associated with metabolic syndrome are:

If you have three or more of the risk factors outlined above or take medication for these conditions then you either have metabolic syndrome or are at risk for developing it. As you reviewed the list above, you might have wondered why smoking or high cholesterol were not mentioned. Certainly these are risk factors for heart disease; however, they are not considered part of metabolic syndrome.

By all accounts, every effort should be made to control the risk factors associated with metabolic syndrome. Number one among them could be reducing your waist line as there is a correlation between obesity, insulin resistance and many of the other risk factors. 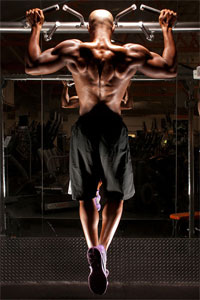 Physical Activity Recommendations from the Department of Health and Human Services (HHS) encourage adults to engage in at least 150 minutes (2 hours and 30 minutes) of moderate-to-vigorous physical activity (MVPA) per week. HHS further recommends that the activity be performed in episodes of at least 10 minutes spread throughout the week.

Several studies have been conducted which affirm the importance of exercise volume (e.g., 150 minutes per week), however less data exists which validates the frequency of when this exercise should be performed. These earlier studies also did not examine the impact of exercise on a person’s odds of having metabolic syndrome.

The researchers at Queen’s University in Ontario, Canada set out to determine if a correlation existed between exercise and someone’s risk of having metabolic syndrome. In addition, they wanted to test the current recommendations regarding exercise frequency (e.g., at least 10 minute episodes spread throughout the week).

“Few studies have evaluated the daily frequency of MVPA participation throughout the week and its relationship with health,” wrote Ian Janssen, lead researcher. “The primary objective of the present study was, therefore to examine the association between the frequency of physical activity throughout the week, and the metabolic syndrome (MetS) in physically active men and women.”

Study Design
The study included 2,324 Canadian adults aged 18-64 years of age. Study participants were asked to wear an accelerometer for seven days, during which time the device captured physical activity and energy expenditure.

According to Dr. Janssen, the important takeaway from the study is that adults should aim to accumulate at least 150 minutes of physical activity per week. By reaching this magic number, at-risk individuals can reduce their overall odds of developing metabolic syndrome. So, get up, get out and get moving!

Exercising Is The Way
Accumulating 150 minutes of exercise can be relatively easy to accomplish. A recent article published in the American College of Sports Medicine points to data which suggests that individuals can achieve meaningful results by engaging in High-Intensity Circuit Training (HICT) using nothing more than body weight for resistance. HICT leverages some of the proven fat loss benefits of other exercise methods in that it alternates between “work” and “recovery” periods.

HICT is essentially a combination of aerobic and resistance training that can be performed almost anywhere because it doesn’t require equipment or weights. For the most part, all that is needed is a few feet of space, 7-21 minutes and a stable surface, like a chair.

My name is Regie Simmons and I am an NPC Men's Physique athlete and aspiring fitness writer and model. I have been training consistently for the last three years and competing for one. I obtained a BA in communications from Howard University and an MBA in Pharmaceutical Marketing from Saint Joseph's University. See my fitness model page for more information!