You are at:Home»Exercise»Pull-ups or Chin-ups – Which Upper Body Exercise is Better?

If you are not sure whether to include pull-ups or chin-ups into your workout, I applaud you because either one of them will do amazing things for your upper body. Unfortunately, there is a lot of misinformation about pull-ups versus chin-ups and which exercise does more for you.

Suffice it to say, both the pull-up and chin-up target all your primary back muscles about the same. The only real difference comes into play as to how much your biceps and forearms are used.

Let me first clear up the confusion about which muscles aren’t being targeted by either a pull-up or chin-up and that’s your chest and shoulders. Those two muscle groups are primarily involved in any type of pushing motion, whether pushing away from the body as in performing a push-up or bench press motion. Or pushing over-head, as you would do when performing dumbbell or barbell over-head presses. Your chest and shoulder muscles are for pushing things away from the body, not pulling in!

To better understand which exercise is better or more effective, it is important to understand how muscles function. Muscles are what move your body. The contraction of your bicep muscle is what causes your arm to bend. When you pull your shoulders back and stick out your chest, it is the muscles of your upper back that are contracting to make that happen.

The Pulling Motion
When you look at the pull-up or chin-up, the primary muscles involved are your latissimus dorsi, rhomboids, and trapezius muscles. These muscles are involved in any pulling motion. Your upper back muscles are your rhomboids and trapezius. They attach to the upper half of your spine and run across to attach to your shoulder blades. They are responsible for pulling your shoulders back, which causes your chest to stick forward. 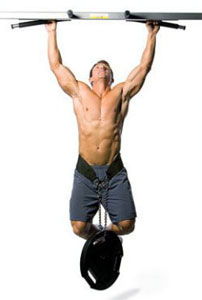 Try This: If you place two of your fingers from your left hand on the front of your shoulder where your latissimus attaches, which is about where the crease of your armpit begins. Now raise your right arm over your head as if you were getting ready to do a pull-up or chin-up.

What you will notice is that the end-point of your right lat muscle is being lengthened, just as it would be when you are hanging from a bar. Now pull your arm down as if you were doing a pull-up or chin-up.

What you will notice is that the two end-points are moving closer together. This is because your lat muscle is starting to contract and shorten, as if you were pulling your body up to the bar.

Repeat that motion a couple of times while keeping your left hand touching the attachment site of your right lat muscle and you will begin to feel and understand how muscles shorten and contract. It is the two end-points moving closer together that tells you which muscles are involved with that movement.

The two important things you should notice are that your chest and shoulder muscles are not contracting and shortening, because those muscles are not involved in any pulling motions. The second thing you will see with this particular movement is that your hand positioning (overhand or underhanded grip) doesn’t make that much of a difference on how those lats, rhomboids or traps are being affected.

Your primary back muscles, lats, traps and rhomboids, are responsible for pulling things closer to your body. That pulling motion, regardless of an over or under-handed grip doesn’t come into play that much with regards to your back muscles. So don’t let anyone tell you that one exercise works more of your back than the other since they are basically about the same.

The differences come with regards to the amount of stress placed on your biceps and forearms. Both pull-ups and chin-ups will work your bicep about the same. It’s like doing bicep curls versus reverse bicep curls (your palms are facing down, instead of up). They are both going to hit your biceps, because it is that muscle that bends your arm, regardless if your hands are turned one way or the other. The real difference is that you get an additional forearm workout when you have an over-hand grip as you would when doing a pull-up.

Why Pull-Ups Over Chin-Ups
There are two reasons why I recommend pull-ups over chin-ups. The first is more for injury prevention. An overhand grip is more of a natural, bio-mechanic positioning of your hands. If you notice that when you stand and let your arms hang naturally, the palms of your hands face back towards your body. If you were to grab a bar overhead, the more natural position would be an overhand grip. The under-handed grip used for chin-ups is a bit more stressful on your wrists and elbows, especially when you add all the resistance of your body weight to those joints.

The second reason I recommend pull-ups is simply to cut some time out of your workout. Pull-ups target your forearm muscles much more than chin-ups, so if you can exercise another group of muscles at the same time you’re hitting the biceps and back, then all the better.

The most important thing is to make sure you work those often neglected back muscles. Many times, I will see people complaining of upper back and neck pain, which is associated with people doing more push-ups and benching movements than pulling motions. So make sure you work those back muscles as much as you do those chest muscles. Don’t just do push-ups for your upper body, add pull-ups or “modified” pull-ups to your routine.