You are at:Home»Exercise»Self Control Tips – How To Increase Diet and Exercise Willpower

Happy New Year! It’s time to make promises, resolutions, and verbal contracts to eat better and get more exercise. I like to think of this time of year as the self-control and willpower season. After a couple of months of throwing discipline to the wind, it’s customary for many to buckle down and try to make up for lost ground. It’s a time to work off the extra treats and make up for those workouts we sacrificed during the holidays.

I’m tempted to write an entirely too long and drawn out piece on how to stick to a new year’s resolution for more than a few weeks, but I shudder at the thought. There’s already far too much of that stuff out there and most of it probably won’t really do much for you anyway. Besides, how many times can you read an article that tells you to write down your goals or to set up realistic objectives you tackle in small manageable steps?

So instead I’m going to give you a new perspective on this whole self-control deal that’s supposedly so important when it comes to eating right and working out. I have to confess that I’m not a big believer in self-control. Well not in the conventional sense anyway. I really don’t think that fighting a craving for ice cream or making yourself go through a workout you don’t want to do is what self-control is all about.

I like to use the analogy of driving a race car around a track. Racing around as fast as you can requires constant balance and control of the car. You have to apply the brake and the gas at just the right times. 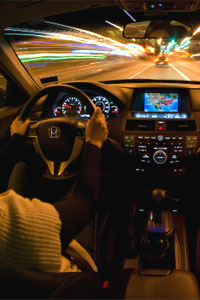 When we associate losing control in a car we often picture sliding off the track or crashing into a wall. This is akin to losing control of our cravings. It’s when we have gone too hard and fast at the Chinese buffet or let the couch and TV talk us out of another workout. It’s when the forces that prevent your success in fitness take over and all you can do is hold on and pray that the slide ends sooner rather than later.

That may be what many folks associate with being out of control. The knee-jerk reaction is often to clamp down and vow to not let yourself lose control again. The lure of the straight and narrow is that there is security and the promise of success if you can just buckle down and get an iron grip over your impulses. It’s certainly tempting, to drastically reduce the risk of losing control and crashing, but is it really a good idea?

If I got into a race car and my main goal was to avoid crashing, I’m at a big risk of letting fear control me. When the light goes green I could just sit there with my foot on the brake or maybe drive around the track at the speed of a turtle. As everyone is shouting at me to go faster I resist the urge. I know I want to go faster, but I’m “being good” and using my self-control. It may not be a fun or exciting trip around the track but I know I’m safe and at little risk of crashing.

In this situation I could fool myself into thinking that I’m using self-control. I could talk myself into the idea that I’m in control of myself and the car, but it would be a complete sham. I’m no more in control while driving with my foot on the brake any more than I was in control as I slid into the wall. In one case the laws of physics were in control and in the second fear was in the driver’s seat. In neither case was I actually the one in control.

This is the same scenario when I see people slaving away to a diet or exercise plan regardless of how they really feel. They deprive themselves of foods out of the fear instilled in them from a doom and gloom diet book. They force themselves to do another workout even though they don’t have the time, energy or spirit. While these folks may appear to be the pinnacle of discipline and self-control, they are really no more in control than the person who can’t stop eating cookies or struggles to stick to a workout. One person struggles against cravings and forces of sloth while the other struggles against the fear of what might happen if they let up even just a bit. 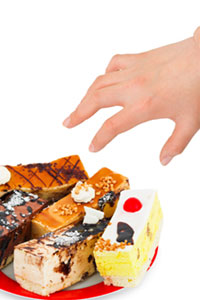 Just like racing around a track, diet and exercise is a game of skill and balance. There are times when you need to hit the gas and there are times when you need to lay on the brake. With time and practice you’ll learn how to apply both in a skillful manner that places you in complete control. It’s when you know what’s best due to your own experience and feedback. You’ll make the choice to eat a cookie or not based on if you yourself want to eat that cookie. It won’t be based off of the rules of a diet program or some sort of fear based dogma. It also won’t be based from a feeling like you just have to eat the cookie from a place of weakness or a craving that causes you to always want something sweet.

True self-control happens when you stop and think about how that cookie will truly make you feel. Not how it’s supposed to make you feel, but to honestly know how you feel about that cookie.

Maybe you’ll eat it, maybe you won’t. There’s nothing saying you should or shouldn’t eat it. Maybe you’ll have half, who knows? In either case making the decision from your personal desire rather than from a place of fear or craving will be when you’re truly in control and calling your own shots.

Like being a skilled race car driver, exercising real self-control takes time and practice to develop. You’re not going to just have it by this time next week. If you’ve been basing your diet and exercise choices from a place of fear or obedience then it may even take a few years to assume full self-control.

For now though know that self-control, where your self is in control, is possible. You don’t have to fight cravings or live under fear in order to get in shape. Just because you’ve slid off the track that doesn’t mean you need to drive at half speed to avoid crashing. You don’t need to fear the forces that drive you with desire. Without them you wouldn’t have the fuel to push yourself to new levels of fitness.

Take your time, be patient and don’t be afraid to take up the reins of your own diet and exercise methods. Make some waves and change some things around. If you’re on the right track you’ll know it. If you make a mistake, it’s no big deal. Don’t get discouraged and give up the control to make your own choices. Everyone crashes now and then, it’s part of the game.

Life is far too precious to live it without self-control. Being tossed around by the forces within or fear just degrades both fitness and quality of life. Putting your self in control will bring you more lifestyle freedom and a much higher level of fitness than you could ever achieve otherwise.