You are at:Home»Exercise»Step 1 To Losing Weight – Sober Up and Stop Drinking Alcohol

When I made the decision to transform my life and reinvent myself, I understood that it required the willingness and a desire to change everything. The very first thing I had to commit to change about myself was to stop abusing alcohol and other drugs. Alcohol held me back from everything I had once been, and anything I wanted to become. As long as I continued to drink I would never control the path of my own destiny. Once I changed this fundamental aspect of my behavior, I was able to take the next step forward.

There are different reasons that individuals choose to change. For some, it is gradual. For others, the choice to correct certain aspects of one’s life comes with a price that weighs heavily upon the spirit. For me, it took a crisis which came to climax over several years of abuse and personal neglect, only to end when divine intervention stepped in and forced me to stop.

For several years, I let myself go. I was just too busy caring for others who were ill and I neglected to make the necessary effort it took to care for myself. I depended on alcohol and other prescription medications to numb my senses and relieve the anxiety, fear, and worry that filled every cell in my body. Over the course of about six years, I had gained 100 pounds!

In order to lose the weight, I had to stop drinking. I had tried to lose weight many times before, but I refused to give up the booze, so I was unsuccessful. One day, I decided to sit down and add up the calories I consumed in alcohol on a daily, weekly, and monthly basis. Because I didn’t drink as much during the work week, but drank huge quantities on the weekend, I averaged out the numbers to cover the entire week. Here is what I learned. 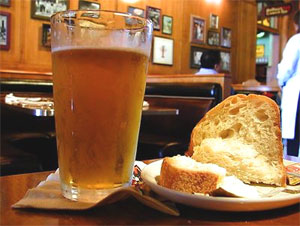 On average, I consumed 4 large drinks per day. I drank beer, wine and hard liquor. The beer I drank was not low-calorie and I preferred pints to bottles. I also drank 16 ounce cans served from a large glass with a tequila shot. I prepared my cocktails in 16 ounce glasses with 4-5 shots of alcohol per glass. I also drank it straight from the bottle to get an extra kick! I had once appreciated fine wine and champagne, but as my dependency grew, I no longer purchased wine to enjoy for its flavor. I was drinking only for its effect. I hid the extent of my drinking as well as I could, but as my life began to evolve around booze, my health suffered because of it and I began to look like a drinker.

It’s really impossible for me to give you an accurate accounting of the alcohol calories I consumed during my drinking days, but as I stated earlier, I averaged four large drinks per day. I’ve come to the conclusion that I consumed approximately 1,000+ calories per day alone, in alcohol. I consumed 7,000+ extra calories per week in alcohol, or 28,000+ extra calories per month. One pound of extra body fat is calculated at 3,500 calories stored. If this calculation is correct, I was consuming about two extra pounds per week, or eight extra pounds per month in alcohol calories alone! Because the body doesn’t technically store the calories from alcohol, I assume I stored every single calorie from the food I ate in body fat. The calories in alcohol do not reflect the calories I also consumed in snack foods that I ate because I was drinking. When you think about the numbers, it’s no wonder I got so fat over the years. Once I quit drinking, I also stopped overeating.

Here are some facts for you to consider if you find yourself drinking more than you should and are wondering why you aren’t losing the weight.

Alcohol and Weight Loss
Each year, many people attempt to lose weight but continue to drink alcohol. Very few individuals are successful at losing weight until they give up the booze. Here is why:

If you want to lose weight and improve your health, but find it a challenge to give up the alcohol, please contact me and we will work on a plan designed with you in mind. Remember that, “Because I’ve Gone Through it, I’ll Help You Get Through it!”