You are at:Home»Exercise»Training Tips During Basketball Season To Get Fast and Strong

For any of you strength coaches out there that are starting out training a high school or for that matter, a college team, you must realize that time is much more limited than during the summer and off-season. I am lucky if I get two 30 minute sessions per week with the team. So with so little time, I have had to trim all the excess fat off of the workouts and get down to business. There are also other issues that you may have to deal with such as player cramping and the mental side of the player. This article will hopefully serve as a guide to you, whether you are a player, coach or strength coach. As a little bonus at the end, I will highlight a great drill I use to build tougher players who are both mentally and physically strong.

So with 30 minutes, I realize that the main priority is to maintain the hard-earned strength and size we gained in the off-season. Every player went up at least 8 pounds; one went up as high as 22 pounds. During a typical basketball game, a player that plays significant minutes can go up to 5 miles in an interval fashion, leading to huge excess post-exercise oxygen consumption (aka: EPOC or oxygen debt), and leading to a huge calorie deficit. With this in mind, I have chosen three essential movements: a press, a pull and a single leg movement. The multi-joint movements stress a lot of muscle mass and cross several joints. I keep the reps in the 6-10 range and only perform 3 sets at each station. The players start a set on my whistle which is normally every 90 seconds. This is done for a few reasons, the first being that I want to stay away from making the players sore, as usually can be seen with reps in the 12-15 range (bodybuilding style). I also do not have a lot of time with the guys during the season. Secondly, I want to maintain strength levels. I know that ideally we would work even lower for strength typically, but I do not care for the players to try to set PRs during the season. Weights in the 1-3 RM range can also be a larger stress on the CNS, something that you want to avoid at all costs during the season. The games and for that matter practices, place a huge stressor on the nervous system, so we have to try to balance recovery, strength maintenance and performance. The players can try to increase weight from week to week. 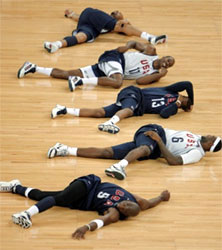 Another area that must be addressed is core and flexibility. As with almost everyone I ever come across, the basketball players are extremely tight in the hips. We always stretch the hip flexors, hip rotators and low back. This can be done after or before the workout, just make sure you get it in! You will also surely be faced with the problem of cramping during games. A lot of the times, athletic trainers want to deal with this problem with bananas and making sure the player is hydrated, which is fine and dandy when talking long-term, but if its money time in the 4th quarter and one of your go to players is cramping, you better have a quick solution. Luckily for you, I picked one such solution up during my competitive bodybuilding days. Calcium or more simply, TUMS or Rolaids taken before a game, at half time or even if the player takes them once cramping has started should do the trick. The calcium helps with the actin-myosin cross bridges that have become locked leading to a cramp. For you muscle heads, this also works before a big leg day in the gym (I figured this out after I almost landed in the emergency room with a severe case of cramping that lasted for three hours). I would also have your players supplement with magnesium throughout the season as most hard training athletes are deficient in magnesium.

Be sure to continue to monitor the mental state of your athletes as well. Basketball is a game of streaks. A player can be on a hot streak and they can also go into such a slump that they can no longer hit the side of a barn with the ball. Visualization will work wonders and the players will take to this surprisingly well if you explain why they should be doing it. Lastly, the drill I used the other day was more of a football drill, but I used it for mental toughness and to teach the players how to land after diving headfirst for a ball. I had a mat laid out with a line of players lined up behind the mat. At the end of the mat was a medicine ball. About 30 feet beyond the end of the mat was a cone. In that empty space, I placed a player that had a stability ball. This was his ‘weapon’. The next player up in line was to dive out on the mat and grab the medicine ball. The player then stood up and carried the ball like a football and had to get to the cone and touch it while the player with the stability ball was trying to prevent him with his ‘weapon’. The players had a blast and I believe if we continue this drill, the mental aspect of it will show up on the court. Use whatever training you can to get the edge on the competition and work hard!