You are at:Home»Exercise»Training Tips To Compete in Weightlifting Competitions

What does it take to compete in a weightlifting event? Like any sport, the first thing is dedication and heart. If you have those two things, you will have much better success in what you do. The next thing is knowledge. You need to learn as much about the sport as possible.

To be a competitive lifter, you will have to take not only your body to its limits, but also your mind. Your training throughout the year is what will determine how you do on meet day. I tell all the lifters I train that if they do their homework with their training, nutrition, rest, supplementation and mindset through the year, they will be prepared on the day of their competition. On meet day, it’s just a mind game so just make sure to use proper form and rely on the strength and confidence you have built throughout the year. It does not matter if you’re competing in your gym or in Las Vegas. A weight is still a weight. It’s an obstacle you must overcome.

When training for an event, you will do many things different compared to people who are just training to stay in shape. First, you choose the competition which is usually at least 3 months out and preferably 6 months or more. Once you have done that, it’s time to put your time in the gym. For example, let’s say you are going to compete in a full power meet which is drug tested. This consists of the squat, bench press and the deadlift. If you are lifting in a raw meet, which means you do not use any lifting gear, you will have less to be concerned about as the gear is a whole other story. When using lifting gear, athletes can lift much more than those not using gear. There have been lifters in the bench press or squat that say they get 300 pounds out of their gear which adds to their lift tremendously. On the day of the event, all lifters will compete in the squat first followed by the bench press and then the deadlift. Your total weight for the combined three lifts will be your weight which you are scored by.

Most raw meets let a lifter wear a lifting belt and some knee wraps. If that is the case, you will want to get that gear either from Titan Support, Inzer Advance Design or Metal Gear. They are three of the best companies in the lifting world. 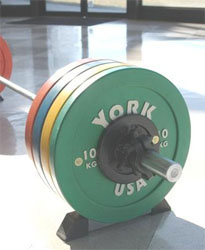 Training programs for competition vary. Our team lifts 4 days a week focusing on the squat, good mornings, hyperextensions, deadlifts, rows, wide pull downs to chest, bench press, close grip press, front shoulder press, biceps curls and ab work. We do our rep patterns in cycles. For example, we will do repetition sets of 5 reps after our warm up, for the first four weeks. Then we will do rep sets of 3 for the next four weeks and follow that with 2 rep sets for the next two weeks. Once we have done that, we will take one whole week off. If you train as hard as we do, you will need it. Then we go back to the same rep program raising the weight for the designated reps we did before. We will continue to do this until we get to our competition.

Forget about doing cable crosses for chest or all kinds of resistance machines. If you’re using weight lifting gloves, toss them in the trash can. You won’t be allowed to use them on meet day. If there are experienced lifters that have competed and done well, see if they will help you. If not, read as much as you can and have someone video tape your lifts to see how your form is.

There is some special equipment you may want to look for in a gym or at home. If you plan to compete in the squat, look for either a mono lift or power rack that has bars you can set up so that you don’t have to walk the weight out to squat. My rack has two sets of bars, one which we set at parallel and the other where we want the bar on our back. The bar is in the middle of the rack, so all we do is get in squat position, take the weight off and have another lifter slide the safety bars out. By doing this we don’t have to walk the weight and tear up our knees and back needlessly. This also helps on getting a bigger lift as you’re not using so much energy. The mono lift works on the same principle, which is not having to walk the weight. You will also need a dead lifting area. A room that has a platform to do heavy pulls and where you can use weightlifting chalk. That is, if you plan to compete in the deadlift.

We leave one rep max sets until two weeks before the meet to see where we are at and to gauge the lifts that we will use on meet day. In the week of the event, we only train two days and we make sure we have three days rest before we compete. You won’t gain any more strength that close to an event. The only thing you may do is get an injury or be overtrained for the event.

In most meets, you have to weigh in the day before you compete. At that time, you will give them your opening attempt for meet day. On the day of the meet, you get three attempts to do your very best weight according to the rules of the sanctioned event. It is important to make your opening attempt light to get on the board. If you miss your first lift, you must do that same weight or more since you are not allowed to go down in weight.

There are many federations you can choose to compete in. Some which have just bench press or deadlift as lifts to compete in. Meets will have different weight and age classes. This makes it fair so that you will be competing against people close to your same weight and age. Some federations also have divisions for handicapped individuals which is awesome. The great thing about the sport is that people from all ages can compete from as young as 10 years old up to 100 years of age.

The magazine Powerlifting U.S.A. is loaded with tons of information which I would highly suggest subscribing to if you want to compete in strength events. They also list up coming events, meet results and the top lifters in the United States every year.