You are at:Home»Exercise»Weight Training During Pregnancy – Safe Exercises for Women

Physicians and personal trainers in the past have been cautious to encourage strength training or resistance training for pregnant women. This is due to the physiological changes taking place within the body and the concern of complications to the mother and or fetus during pregnancy.

Promoting a healthier pregnancy and labor for mothers and fetuses is a topic that has had many nation wide discussions and debates. In recent years doctors and training professionals shied away from encouraging any exercise training regimens for fear that overheating or even moderate exercise could harm the fetus. This idea seems to be slowly changing due to new research and data collection, which has provided research pointing to the idea that previous recommendations seem to have been overly conservative. Both the American College of Obstetricians and Gynecologists and the American College of Sports Medicine conclude that when taking a reasonable approach to exercise training, exercise is safe for women with uncomplicated pregnancies. These reputable sources also suggested that there are potential benefits to infant health from maternal exercise.

The “marathon of labor” may want to be considered prior to conception when a woman would be free of the natural limitations of pregnancy. The value of a prenatal resistance-training program is that of maintenance during pregnancy rather than that of development. Given that this early training does not always occur, it is possible for proper strength training to play a role in the promotion of health and well-being for the pregnant woman and her baby as well as promote a less painful labor and recovery. It must be noted that women who have not exercised regularly should be cautious to start an exercise program once they become pregnant. In addition, medical clearance is prudent for anyone who is pregnant or who has had a previous complication during a pregnancy.

When strength/resistance training is done correctly with proper observation and assistance, current information indicates that physically fit women who continue to perform weight-bearing exercise throughout pregnancy and lactation at or above fifty percent of their pregnancy levels gain less weight, deposit and retain less fat, feel better, have shorter and less complicated labors and recover more rapidly than women who either stop exercising or who do not exercise at all. During labor many women reported muscular aches the day following delivery. Prenatal resistance training can help decrease this muscular soreness. 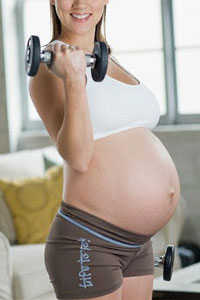 One issue dealing with the unborn child is the danger of umbilical cord entanglement. A study observed in 1995 by Dr. Clapp and associates showed that because of strength training, cord entanglement did not increase, rather it significantly decreased. This same study also looked at the meconium to see how many babies were stressed enough to move their bowels during labor, and again the number was much lower in the babies of the exercising moms.

Musculoskeletal changes in a woman’s body during pregnancy are related to weight changes in the uterus, fetus, breasts as well as the most crucial, an increase in lumbar lordosis (swayback), which causes a shift in a woman’s center of gravity. Metabolic rate increases resulting in a greater heat production, which maintains fetal temperature above maternal level. During exercise the heat production is increased, therefore the need for staying hydrated while training is important, as is avoiding exercise in hot, humid weather. Exercise acts in conjunction with pregnancy to increase heart rate, stroke volume, and cardiac output. However, during exercise, blood is diverted from the abdominal viscera, including the uterus, to supply exercising muscles. The decrease of blood flow in the vessels of the abdomen can reach fifty percent, which raises theoretic concerns about fetal hypoxemia (low on oxygen). Increases in oxygen consumption are noted in pregnant women, presumably as an adaptive response to the increased oxygen requirement of the fetus. With mild exercise pregnant women have a greater increase in respiratory frequency and oxygen consumption to meet their greater oxygen demand.

In a study involving well-conditioned pregnant women and resistance training, no premature onset of labor or premature rupture of the membranes was noted. Compared with other women, the well-conditioned women were found to have shorter labors, less need for obstetric intervention and fewer signs of fetal compromise. Others have demonstrated that those who regularly exercise are less likely to require epidural analgesia. Women tend to also experience extreme muscle fatigue and soreness after labor. Prenatal resistance training can help to alleviate this muscle discomfort. Another interesting research fact relates to osteoporosis in females. Females make up 80% of the more than 50 million cases of osteoporosis and that women experience a measurable lactation-induced loss of bone density in the postpartum period. Resistance training during pregnancy helps build extra bone density to offset these loses and reduces the risk of osteoporosis.

This study suggests that the thirty-degree supine posture is to be avoided during late gestation, all of the research that has been reviewed states that women who are entering their second trimester and later should avoid all exercises that require lying on the back. The major concerns are that when women are on their backs the blood flow to the uterus is reduced, and also compresses the vena cava (the vein that carries blood to the heart), which decreases cardiac output and reduces blood flow to the placenta.

Women should avoid any exercise that can cause a serious fall as well as contact sports and scuba diving. Scuba diving should be avoided due to the fact that the fetus is not protected from decompression sickness and gas embolism, which can lead to asphyxiation of the fetus. This also includes activities in which loss of balance may be detrimental and a risk of abdominal trauma is high. 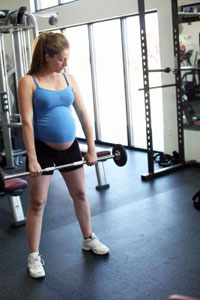 There are several exercises that will help promote pregnancy and labor. The major areas and muscles of focus are the upper/lower back, abdominal muscles and leg muscles. These help to prevent backaches, maintain good posture, as well as support the extra weight throughout your pregnancy. The extra workload during pregnancy makes the strength of the muscles even more important for pregnant women. The abdominal and lower back musculature is used to maintain posture and gate during changes in weight, center of gravity, and increased lower back lordosis along with improving the common pregnant waddle walk. These muscles are also crucial during the second pushing stage of labor.

Because of the increase in laxity during pregnancy a proper warm-up routine should be performed utilizing all major muscles to help prevent common sprains and strains during gestation. Hormonal changes are thought to induce the laxity, which helps in assisting the softening of the pubic symphysis to accommodate delivery. Some other important muscles that need to be targeted are hip and pelvic adductors and abductors, for they also help in the pushing stages of labor.

There are three stages or trimesters of pregnancy and the benefits of exercise are different in early and late pregnancy. Early exercise improves the growth of the baby and decreases maternal symptoms. Late pregnancy exercise maintains fitness, limits weight gain, and shortens labor.

When performing abdominal exercises during pregnancy one fact that there is no question that is true relates to the occurrence of diastasis. Diastasis is the separation of the two halves of the rectus abdominis muscle in the middle of the belly. This can be checked by lying on the back with knees bent. Place fingertips one to two inches below the bellybutton. Lift the head and feel for a ridge protruding from the midline of the abdomen. If the first trimester has passed, to help prevent diastasis or make it become worse when doing abdominal exercises, pillows may be used to prop up the back so that shoulders are higher than the belly. Wrap a towel around the waist and crisscross it in front. Grasp and pull the ends up and outward as the abdominal muscles are contracted, exhale, and raise the head.

Childbirth is nothing new. The body begins the preparation for this endeavor upon conception. The wellness component of this endeavor for mother and child is best when viewed as maintenance of an exercise program that began prior to conception and is modified to deal with the changes and limitations that naturally occur during pregnancy. There are certain techniques, positions, exercises and activities that must be avoided when performing strength training during pregnancy.

There are many positive benefits that may be reaped from strength training and exercise during pregnancy, but they all must be supervised and monitored prior to so that safety is ensured.

I have a Bachelors Degree in Physical Education, a Masters Degree in Exercise Science, and I'm a certified personal trainer (NSCA). I was the strength and conditioning coach for the Texas Rangers minor league affiliate, Spokane Indians. See my profile page for more information!