You are at:Home»Exercise»Weight Training for Kids – Benefits of Exercise for Children

Children between the ages of 6 to 13 can weight train. Before I start getting into the specifics of what to do, everyone should realize that there isn’t any evidence out there that suggests weight training is harmful to children and their growth patterns. How can anyone say that the day someone turns 13 is like this magical moment in a kid’s life that they can all of a sudden start lifting heavy things on a regular basis. If anything, the kid that waits until that magical day, is probably going to be really annoyed that he has to put down the Xbox controller.

Let’s take a look at an example. Remember the farm kids that lived just outside of town that were always stronger and more athletic than the kids from town? Well, maybe they were not stronger than all the kids from town, but these farm kids had a distinct advantage over every town kid. They were on a training program. No, not your typical weight training program where they had specific exercises and rep ranges set out for specific days, but they were constantly lifting, carrying, and throwing heavy things around on their farm. They had to do it because it was how their family made a living and put food on the table. They did stuff everyday like bailing hay, carrying pails and shoveling who knows what. They did the exact same movements with an external load that you would do in a weight room, and nothing bad happened to them.

So hopefully by this point I’ve somewhat convinced you that weight training for youth is safe. Now I hope you don’t take this as the green light to go down to the gym and start putting your six-year-old through an intense weight training routine. That’s not what the point of this article is.

Everyone is so overprotective of the children today that they’re afraid to let them do anything without their full supervision. I live in a very small town and it’s rare to see kids playing outside without a parent near by. It’s so much easier to let them play video games inside where we know they’ll be safe. We need to let our kids play outside again, let them explore their surroundings on their bikes and put them to work outside mowing or raking the lawn. We need to let them move. 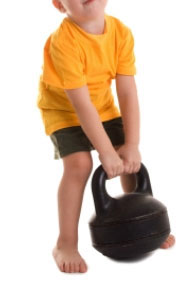 Now I realize I got off on a tangent but my point is that children have the ability to lift weights safely. Keeping in mind all children have immature skeletons, as their bones don’t mature until they get between the ages of 14 to 22. But this doesn’t mean that anything catastrophic will happen to them if they pick up a 10 pound dumbbell.

Children are often times vulnerable to growth related overuse injuries due in large part to parents having their kids specialize in a particular sport starting from a young age. Their temperature regulation system is also immature at a young age because of the large ratio between their large surface area and smaller muscle mass. So children don’t sweat as much as adults do, so they’re more susceptible to heat exhaustion and heat stroke. Also, because of their smaller muscle mass, their capacity for exercise is smaller than that of an adult, so they’re not going to last as long during any bout of physical activity.

Children can drastically improve their strength through weight training. Now, unlike adults, whose strength increases are mostly due to muscle growth factors, children’s strength increases are mostly due to neurological factors. So when you consider putting together a program for your child, be sure to seek medical clearance first. You always want to make sure that your kid is physically and mentally ready for weight training.

Another thing to consider is the repetition range for each exercise. Since your young child isn’t going to be eligible for the Olympics for another couple of years, you should consider a rep range of 8-12 or even 15. The goal here is not to turn your kid into a powerhouse but to get them a little stronger and to develop exercise into their daily routines. We want our children to consider exercise as being a normal part of everyday life.

With that being said, you should also consider the amount of rest days in between weight lifting sessions. It’s important to give at least 1 to 2 days of rest in between sessions to give your child’s body enough time to rest and rebuild itself up for the next one. Again, your child isn’t getting a tryout for the Yankees in a couple of weeks, so don’t make it into something ridiculous that your child ends up hating after a week. Make it something they look forward to and something that is fun.

The last thing to consider is making sure your child is properly warmed up for each session. Dynamic movements and bodyweight exercises are perfect for getting the body ready for what it’s about to face. Next, get a good stretch in and drink some water. Being dehydrated is not something you want while doing exercise. Bring a half liter of water in a bottle and make sure that it’s empty before you leave the gym. Children in general don’t drink enough water and it’s important that they also turn this into a part of their daily life.

So in closing, if someone tells you that weight training for youth is dangerous, ask them for the evidence. I have yet to find an article on the dangers weight training causes to children and their growth patterns. The only injuries in children that come with training with weights occur when someone drops a weight or doesn’t perform an exercise with proper form. If you really dig deep into the research, you’ll find that less kids get injured lifting weights than playing games we’ve come to accept as safe like soccer or hockey. Just look down the road at the farm boy who’s stronger than everyone else. He’s been lifting “weights” for years!

I'm a certified athletic trainer with Canada Fitness Professionals. Living in Northwestern Ontario, hockey is king, so 95% of my clients are hockey players. I also specialize in youth fitness and I train kids between 10 and 16 years old. See my profile page for more information!