You are at:Home»Fat Loss»How To Build a Better Body – Part 1: Faster Fat Loss

Most people enter into the fitness world or start a new training program wanting to simply build a better body. They want a more aesthetic physique, but a better body to most people does not mean that they want to build a massively muscular physique of a typical bodybuilder. However, the program that they usually implement, whether they receive it from a certified personal trainer or just create it themselves, is most often based around “old school” bodybuilding style training methods and routines.

Training with a bodybuilding style program is not going to be effective for the majority of the population, especially the non-chemically enhanced portion of the population. So what do most people who want to build a better body really want to achieve? For most of you out there, it will mean losing excess body fat, and for some, it will also mean adding some extra lean muscle to your physique.

Traditional training routines for fat loss are a rather slow and time-consuming process. In general, people associate fat loss with long and drawn out exercises along with calorie deprivation. If you perform this type of LISS (Low Intensity Steady State) exercise then your results are probably not going to be what you expect! 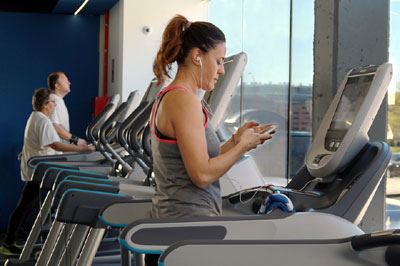 Have you ever wondered what you can do to speed up and accelerate the fat loss process? Have you ever stopped to think about the training methods you use and if what you are doing is responsible for the lack of progress or the slow progress you are currently making?

Take a look at what you are presently doing with your training routine. Is the majority of the work you do performed slow and stationary? Do you generally lift slow and move slow? Maybe if you started to add a little speed training into your workout program, you would start to see your fat loss results accelerate!

I come from an athletic training background and have observed that the leanest athletes tend to spend the majority of their training time performing activities which require them to train with intensity and move their bodies at high speeds. Even when they do slower activities, such as static-type lifts in the gym, they will still focus on exploding the weight when executing the movements. They often do some explosive exercise afterwards also (sprinting, etc). These athletes will rarely be found training using slow and methodical movements.

An athlete’s sport requires them to be fast and dynamic, so they need to train in a similar manner and they need to be specific with the training they perform. It is this method of training that yields the lean and ripped physiques that these athletes possess.

You might want to take the same approach when it comes to accelerating your own fat loss results. Don’t do too slow movements, unless you’re obviously injured or rehabbing from an injury. Think of it like this, “slow movement equals slow progress”. A study carried out recently found that 2 groups of subjects lifted their calculated %’s of their 1 rep max (1RM) for the same amount of volume of training. One group lifted at a fast tempo and the other group lifted at a slow tempo. The results indicated that the faster group had a significantly greater elevation in metabolism within 5, 10 and 30 minutes post-exercise (Mazzetti, 2007). This is considered the EPOC (Excess Post-exercise Oxygen Consumption) or “afterburn effect” post-exercise. 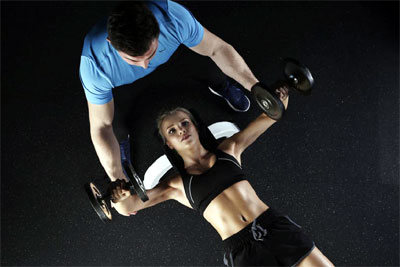 Now, this doesn’t mean that you should perform every single exercise as fast as possible or that you should sprint around the gym like a crazy person! It simply means that you need to start incorporating some exercises and training routines that will either require you or encourage you to move your body or body parts faster than you’re doing now. Just as athletes are told to think fast and train fast if they want to be fast, this type of training is telling your body to train fast if you want to get lean fast!

Why is this important? Well, it’s because aerobic exercise is limited. In other words, once oxygen becomes limited, you are no longer doing aerobic activity. While cardiovascular exercise is maintained as long as the muscles of the body are working, aerobic exercise, by its very nature, must be performed at a low enough intensity to ensure adequate oxygen consumption. But, here’s the problem. In order for the body to get leaner, it must be continually challenged with increasing intensity. Aerobic exercise has a built-in intensity ceiling and therefore, becomes a limiting factor for adaptation. Now, if you are looking to get lean, it makes sense to put demands on the muscle and get it to burn calories. Does 15 minutes of jogging followed by 30 minutes on the elliptical machine sound familiar? What if I was to say that you could divide it by 3 and get 2-3 times the benefits?

If you train at low, steady-state intensity (LISS) and perform typical endurance type activities, you will do exactly that, increase your endurance! This equates to you utilizing energy more economically, increased running economy and lower resting metabolic rate. In other words, you just made it harder for yourself to burn off that same amount of energy in your next workout session. That’s great if you are training for an endurance event, but not if you want to look lean and athletic. Do you think a tracker and field sprinter ever goes for a long, slow run? Of course they don’t! Not only is it useless to them, but it’s actually counterproductive to their goals! 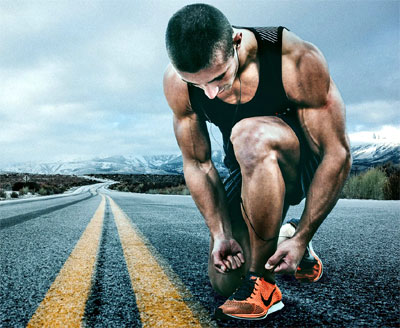 Any type of exercise initiates a stress response from the endocrine system, and this hormone is called cortisol. Cortisol is a stress hormone that will break down muscle and fat for use as energy. Aerobic exercise, by its very nature, never allows the body to reach the intensity required to release growth promoting testosterone and HGH (Human Growth Hormone) and continually exposes the body to unopposed cortisol, which makes fat loss more difficult and muscle wasting an easier option for the body. High intensity training will also release this cortisol, but it will also release the muscle protective hormones HGH and testosterone. When testosterone and HGH are present with cortisol, fat storage is blocked and the three hormones together amplify fat burning. This scenario results in body fat loss, not lean muscle loss and definitely not weight gain. So you see, stress hormones in high amounts are appropriate when they act with the growth hormones of the body. Stress hormones cannot lead to fat gain and aging when they are followed by high intensity activity. In the natural world, stress leads to increased availability of sugar, which leads to the ability to fight or flee. 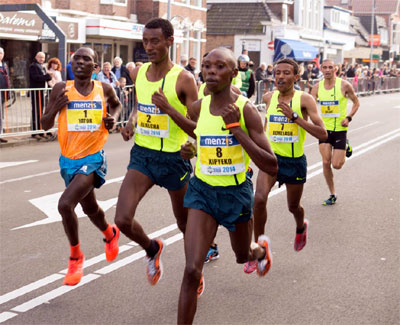 Research has shown that it is not just what happens during exercise, but also what happens after exercise that makes a difference. Have you ever walked up a big hill? When do you breathe the hardest during the activity? It’s not until you reach the top of the hill that your body really begins to gasp for air. In exercise research, this is known as EPOC (Excess Post-exercise Oxygen Consumption) which we touched upon earlier in this article.

The ABE (After Burn Effect) basically refers to a physiological elevation in metabolism. This is why you need to think about training to burn fat and calories after your workout. The exercise routines or training protocols you use must have a positive impact on your metabolism, not just during the activity, but after the completion of the activity as well.

We always like to bring adaptations back to evolution. When our ancestors had to kill their dinner, or avoid being eaten, their level of fitness and the capacity to adapt determined success or failure, which was life or death! Every time our ancestor missed a kill, or barely escaped being eaten as dinner, their body got leaner, faster, and stronger in order to survive.

We know that interval training (alternating between high-intensity and easy recovery periods) helps your heart work more efficiently and burns calories in record time. New research from the University of Guelph in Ontario shows that it also increases the amount of fat you burn during your other workouts also. In the study, women cycled for four minutes at 90 percent of their max, rested for two minutes, and repeated the pedal/rest interval nine more times. After doing these hour-long workouts (called HIIT for High-Intensity Interval Training) every other day for two weeks, the women used 36 percent more fat for energy during a low-intensity 60 minute ride than they did before the study. Intervals improve your ability to use fat for fuel. This does not mean you have to do 60 minute interval sessions on the stationary bike. It means that if you replace your typical cardio session with a HIIT routine, you will amp up the fat burning effect of your lower-intensity workouts also. 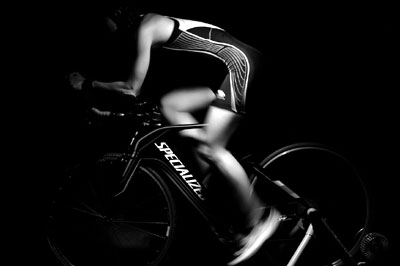 I know what the HIIT skeptics are saying, “but you have to workout in the fat burning zone” to get results. Well, I’m telling you to exit the fat burning zone immediately! Training at the traditional “fat burning zone” is not only time-consuming and counter productive, it’s boring! Not only is it boring, but the very nature of aerobic exercise is to increase endurance. If you increase endurance, you also become more economical with substrate (fuel) and this means the hour on the treadmill you did last week is going to burn a hell of a lot fewer calories than the hour you did last month! Your body has simply done as it’s told and devised a way for you to complete the hour session without burning as much energy. It’s a survival mechanism and it’s very efficient!

Not only will your body adapt in the short-term, but it will also adapt to it in the long-term. Your body also becomes accustomed to the movement pattern you have been doing and adapts accordingly! If I told you to carry a large box from one side of the room to the other, would you pick it up in one hand and hold it over your head, or would you bend your knees, squat over the box and carry it close to your center of gravity? The second one, right? You would make it easy for yourself! That is exactly what your body does! Your metabolism knows exactly what demands are being placed on it and exactly what muscles are firing and can coordinate them accordingly. Its goal is to make it easy for itself! With the ultimate result of reducing the net amount of energy as the workout goes on. Energy production is not linear when doing cardio!

All fat loss training protocols should have a metabolic component to them. For example; resistance training plans attack the muscle, and muscle is metabolically active. When you attack your muscles via resistance training, the muscle fibers become damaged (tiny microscopic tears) and they need time and energy to repair and grow back stronger. This repair process is costly and heightens metabolism! Circuit training and interval training protocols have an even bigger metabolic emphasis. Their primary function, along with conditioning, is to cause EPOC or the desired afterburn effect! This helps to turn your body into a fat burning furnace! In How To Build A Better Body – Part 2 we will address how to train for increased muscle gain.

My training philosophy is to always train individuals like they are athletes. Even if they are not competing in any sport, they can gain from this athletic approach. We are all designed to perform like athletes. The athletic approach can help anyone achieve their health and fitness, fat loss and muscle building goals! See my profile page for more information!